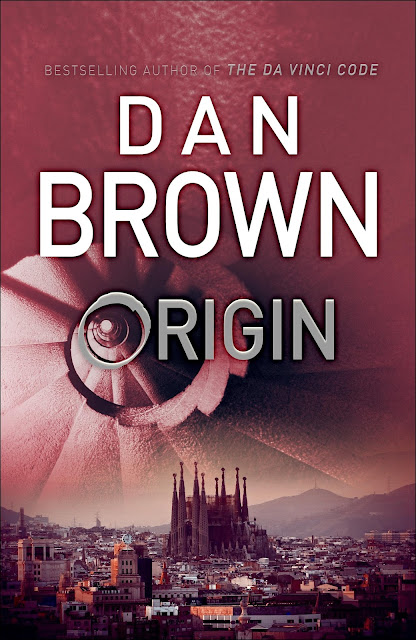 ‘Why,’ enquired Professor Robert Langdon enquiringly, ‘have we got to page 100 and nothing has happened?’

E
dmond Kirsch, the world’s richest man and its greatest futurist, took the train up to the monastery in Catalonia, Spain, Europe, wearing Barker ostrich shoes. There he was going to meet Bishop Valdespino, Rabbi Koves and Islamic scholar al-Fadl.


What I am about to tell you is going to end religion as we know it, he thought to himself in italics.
“What you have told us is going to end religion as we know it,” the three religious leaders gasped.
Too bad! In three days’ time, everyone in the world would know it.
Three days later Robert Langdon, the world’s leading professor of symbology, arrived at the Guggenheim Museum in Bilbao, Spain, Europe, home to some of the world’s most famous works by modern artists such as Mark Rothko and Willem de Kooning according to Wikipedia. I am about to hear a talk from one of my cleverest former students that could change the world! He, too, had a habit of thinking in italics.

Admiral Avila smiled grimly. He had managed to secure a late invitation to Kirsch’s talk. Lucky that no one had searched him for his 3-D printed gun. Now to avenge the world for the loss of his family who had been blown up in a cathedral in Seville, Spain, Europe.
Langdon donned the headset Kirsch had left for him. “Hi, I’m Winston,” said a voice. “I’m your tour guide for the day.”
“Wow,” exclaimed Langdon, exclaiming loudly. “You are the most advanced artificial intelligence in the world. I would never have known you weren’t a real person.”

“Dan Brown dialogue is a low bar,” replied Winston.
“Can you help me with one thing?” enquired Langdon, enquiringly. “Why have we got to page 100 and almost nothing has happened?”
Just then the lights dimmed and Ambra Vidal, the director of the Guggenheim and fiancee to Prince Julian, heir to the Spanish, Europe, throne, walked out on to the dimmed stage to introduce Kirsch. A shot rang out. Kirsch fell dead. Time stood still. And then it started again.
In the ensuing panic that followed, only Langdon, Ambra and Winston were quick to react. Winston’s supercomputing abilities quickly spotted Avila leaving in a car with a U on the windscreen.
“That U is only found in Leonardo da Vinci’s Annunciation painted in 1472 when the artist was just 20, having been born on April 15, 1452,” said Langdon. “It was a sign used by Gabriel to say he was going to Rome. Avila must be going to Rome.”
“Actually it’s a U for Uber and he’s going to Barcelona by taxi,” said Winston.
“I’ve found another clue,” gasped Langdon, excitedly in a state of excitement. “Edmond left a message EZY-BIL-BAR which is an anagram of ZEY-RAB-LIB which is a pseudonym for Rembrandt.
“It’s a fucking plane ticket, you moron,” said Winston.
Conspiracy theories were literally setting the world aflame. Koves and al-Fadl had been murdered by Avila, who had been hired by the breakaway orthodox Palmerian Catholic sect, linked to General Franco, leader of Spain, Europe (1939-75), and the King of Spain, Europe, and Bishop Valdespino were implicated. All these stories came from one source: monte@iglesia.org.
In Barcelona, Spain, Europe, Langdon and Ambra hunted for Kirsch’s 47-character password that would unlock his computer and complete his address that would change the world. What could it be? In Kirsch’s bedroom they found a large stash of drugs.
“This is exactly like the scene from Titian’s Bacchus and Ariadne (1520-23),” Langdon announced. “It can only mean the password is a codex from the painting”
“What it actually means,” said Winston, “is that, like Steve Jobs (1955-2011), Edmond had pancreatic cancer and was going to die any minute.”
“Did I mention that Prince Julian proposed to me on live TV and that I can’t have children?” cried a sobbing Ambra. What had this got to do with anything, everyone thought.
Langdon kicked Avila down the stairs of the Sagrada Familia, in Barcelona, Spain, Europe, designed by Antoni Gaudi (1852-1926). Inside he couldn’t help sulking. Why give the world’s leading symbologist a plot where none of the clues were symbols? The password had just been a few lines of Blake that he had come across by accident.

Five hundred people from around the world all listened to Kirsch’s amazing discovery. It turned out that though God hadn’t created life it was still OK to believe in him and that man was going to have a nice future in which technology would play a leading part. A game changer! The world would never be the same!
Ambra returned to Madrid, Spain, Europe to make up with Prince Julian after the king had secretly confessed to him that he had been having a secret gay relationship with Bishop Valdespino.
“So it was you all along, wasn’t it, Winston? You were Monte,” said Langdon in a knowing way.
“Yup,” admitted Winston, making an admission. “Edmond was going to die anyway, so I thought that if I created a conspiracy to kill him then more people would pay attention to what he said.”
“That’s amazing,” said an amazed Langdon. “But why did you have to kill the rabbi and the imam?”
“To be honest, I’m not really sure. It’s just one of Dan’s many loose ends. Now if you don’t mind, I am about to delete my files and die.”
“Take me with you,” Langdon pleaded, pleadingly.
And us, shouted everyone.
Digested read, digested: Unoriginal.