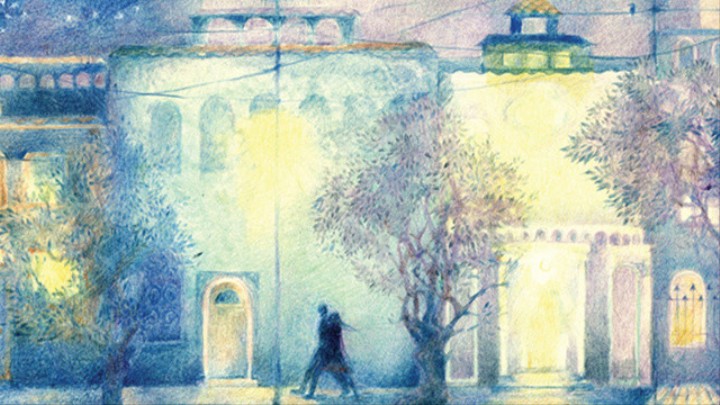 All artwork by Tara Mizner.
"Thank You"
A Short Story by Alejandro Zambra

Alejandro Zambra is one of our favorite living writers. His first book, "Bonsai", won the Chilean Critics' Award for Best Novel of the Year in 2006. We first read his work when Farrar, Straus and Giroux published "Ways of Going Home" in 2013.

Alejandro Zambra
Nov 22 2013, 7:00am
Alejandro Zambra is one of our favorite living writers. His first book, Bonsai, won the Chilean Critics' Award for Best Novel of the Year in 2006. We first read his work when Farrar, Straus and Giroux published Ways of Going Home in 2013. What distinguishes Alejandro from his contemporaries is the sweetness and intimacy of his writing, and his confidence in letting himself be as he is. As you read his work, there's never the impression that he is second-guessing himself, thinking, "So-and-so would do it this way," or "Such-and-such editor would say that." He exhibits this remarkable confidence on the page, one that allows him to be himself and to speak, a special kind of generosity. It feels like knowing and speaking to a sweetheart—it never feels like he's an author who pretends, or tries to teach, or falls into egotistical traps. Flaws in writing often come from flaws in character. Alejandro doesn't seem to have any of those. He's just a lovely, special, strange person who seems to look at his actual world and describe it in his actual, natural voice, and he leaves it at that. He has the authority that J. M. Coetzee, V. S. Naipaul, and Bret Easton Ellis have all identified as the writer's bedrock.

"I got a feeling you two are together and you're keepin' it a secret"—"No we're not," they answer in unison, and it's the truth: for a little over a month now they've been sleeping together, they eat, read, and work together, so that someone with a tendency to exaggerate, someone who watched them and carefully parsed the words they say to each other, the way their bodies move closer to each other and entwine—a brash person, someone who still believed in these sorts of things, would say they really loved each other, or that at least they shared a dangerous and generous passion; and yet they are not together, if there is one thing they are very clear about it is precisely this, that they are not together. She is Argentine and he's Chilean, and it's much better to refer to them like that, the Argentine woman, the Chilean man.
They'd planned on walking, they'd talked about how nice it is to go long distances on foot, and they even reached the point where they were dividing people into two groups: those who never walk long distances and those who do, and who they believe are, because of that, better. They'd planned on walking, but on a whim they hailed a taxi, and they had known for months, even before they'd arrived in Mexico City, when they'd received a set of instructions that was full of warnings, that they should never hail a taxi in the street, and up till then it had never occurred to them to hail a taxi in the street, but this time, on a whim, they did it, and soon she thought the driver was going the wrong way and she said as much to the Chilean in a whispered voice, and he reassured her out loud, but his words didn't even get to take effect because right away the taxi stopped and two men got in and the Chilean reacted valiantly, recklessly, confusedly, childishly, stupidly: he punched one of the bandits in the nose, and he went on struggling for long seconds while she shouted, Stop it, stop it, stop it. The Chilean stopped, and the bandits let him have it, they showed him no mercy, they may have even broken something, but this all happened long ago, a good ten minutes ago. By now they've already given up their money and their credit cards and they've already recited their ATM PIN numbers and there's only a little time left that to them seems like an eternity, during which they ride with their eyes squeezed shut, "Shut your eyes, pinches cabrones," the two men tell them.
And now there are three men, because the car stopped a few minutes ago and the taxi driver got out and a third bandit who'd been following behind them in a pickup truck got behind the wheel. The new driver hits the Chilean again and feels up the Argentine, and they accept the punches and the grabbing hands with a kind of resignation, and wouldn't they like to know, as we know, that this kidnapping really will be over soon, that soon they will be walking silently, laboriously, with their arms around each other, down some street in La Condesa—because the bandits had asked them where they were going and they replied that they were going to La Condesa and the bandits said, "Well, we'll drop you off in La Condesa then, we're not so bad, we don't want to take you too far out of your way," and a second before letting them out, incredibly, the bandits handed them a hundred pesos so they could take a taxi home, but of course they didn't go home by taxi, they got on the subway, and at times she cried and he held her close and at other times he confusedly held back his tears and she moved her feet closer to his the way she had in the taxi, because the kidnappers had made them keep their distance but she had kept her right sandal on top of the Chilean's left shoe the whole time.
***


"Who's Chupete Suazo?" asks Chilean Two, who surely knows but feels obliged to demonstrate that he doesn't care about soccer. Chilean One was going to answer him, but the Spaniard knows a lot about soccer and tells him he's a Chilean center forward who looks fat but isn't, who plays for the Rayados in Monterrey, and who had a successful season when he was lent to Zaragoza, but then he went back to Mexico because the Spaniards couldn't afford him. Chilean Two replies that the same thing happens to him, that he's actually skinny but people think he's fat.
Chilean One and the Argentine are still sitting very close together, but they keep a prudent distance, since even though everyone knows or guesses there's something going on between them they still pretend and develop strategies to keep from being found out, and it's not exactly out of modesty, more like desperation, or maybe because the time is gone when things were so simple as to just be together or not, or maybe everything is still that simple but they haven't accepted it, and it really is absurd that they don't live together because they always sleep together—it's almost always him who sleeps over at her place, but sometimes the Argentine stays over at the apartment the Chilean shares with the Ecuadorian girl. What the Chilean and the Argentine really want is to be alone, but the night draws out in the eternal retelling of the kidnapping story, in the search for details they hadn't remembered and that, when they do remember, bring them a new and renewed complicity. Finally he says he's going to the bathroom and instead goes into the Argentine's bedroom; she stays a little longer in the living room and then she slips away, too.
She takes a long shower and makes him take one too, to wash the kidnapping off of them, she says, thinking of the groping she'd been subjected to, groping that was in any case minimal, for which she is thankful. That is, in fact, what she said to the bandits when she got out of the car: "Thank you." She's said it many times over the course of the night: "Thank you, thank you, everyone." To the Spaniard who comforted them, to the Chilean who ignored them but in some way also comforted them, and to the bandits, too, again, it's never a bad idea to repeat it: "Thank you," because you didn't kill us and now life can go on.
She also says thank you, in the end, to Chilean One, after long hours spent caressing each other knowing that tonight they won't make love, that they will spend the hours very close, dangerously, generously close, talking. Before going to sleep she says thank you to him, and he answers a little late but with conviction: "Thank you."
They sleep badly, but they sleep. And they go on talking the next day, as if they had their whole lives in front of them and were willing to work at love, and if someone were observing them from afar, someone brash, someone who believed in these kinds of stories, someone who collected them and tried to tell them well, someone who believed in love would think that the two of them will be together for a very long time.
VICE