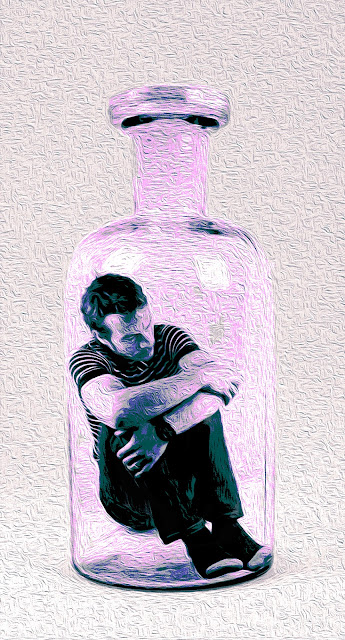 A short story by Nicole Flattery

Out of Ireland summer fiction: this is the last in the series


The morning I moved into the bottle, I was at home with nothing else to do. Many people before me have been in the same position, but have somehow avoided detaching their limbs and re-assembling themselves inside a bottle like a miniature ship. It wasn’t dark inside, indeed it caught nice light, and I stood straight-up and accepted my new glass confines. Limbs came easily away from the body and I’d always liked bottles. My father won a globe-shaped drinks cabinet when I was a child, and I remember popping open that globe and being delighted by all it could store. I think this is where my interest in science came from – the idea that a father, my father, could raise a club high and that golf ball, with speed and velocity, could spin over the heads of lesser golfers, resulting in a drinks cabinet being placed prominently in the hall of a family home until a woman, not my mother, smashed it to pieces with a three-iron. I’ve no background in science, and know almost nothing about the physics involved in a situation like that. I’d finished work a few weeks ago. I’d finished work permanently and, to pass the time, had been reading up on science. When I entered the bottle I kept my glasses on in case there was anything worth examining. Nothing that unfortunate had happened lately. I had one standout bad day. Unlike most people, I could go hours without panicking. Then all the panic would come at once. There was no even distribution. I was either suffocating or I wasn’t suffocating. I’d been looking for somewhere to put myself, a safe place, a space with minimal obligations for some time. In that bottle, I couldn’t touch anybody. Outside that bottle, I just didn’t exist.