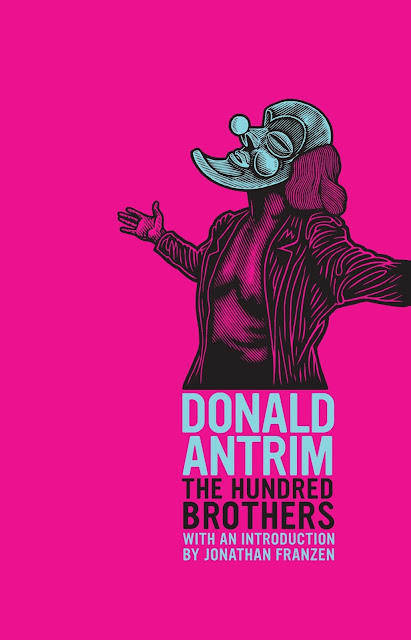 onald Antrim likes his comedy pitch-black. In his first novel, ''Elect Mr. Robinson for a Better World,'' a pleasant suburban town becomes a hellish war zone in which neighbor dispatches neighbor with Stinger missiles, and the psychotic narrator, good old Mr. Robinson, presides over the basement torture and murder of a little girl. Now, in ''The Hundred Brothers,'' the second volume in what is shaping up to be a very nasty projected trilogy, the 38-year-old Mr. Antrim has staged the testosterone-poisoned reunion of a cruel and debauched fraternal cohort whose sibling society would make Robert Bly weep with shame. Yes, there really are 100 brothers -- white Anglo-Saxon Protestant American men of the usual upper-middle-class professions. For mythic and satiric purposes, Mr. Antrim has concocted a fantastically large brood whose prodigious father is dead but still uninterred, and the brothers have gathered in the vast red library of their leaky ancestral home for the ostensible purpose of finding and burying the urn containing the old man's ashes.

Mr. Antrim is a fiercely intelligent writer who maintains rigorous control over his material. The first sentence of the novel is a tour-de-force recitation of the brothers' names. No reference to their mother or mothers is ever made; the maternal principle has been ruthlessly repressed in this novel, and there are fewer feminine touches than in the submarine disaster movies it comes to resemble. All the action takes place between dusk and dawn and within the dim, crowded, noisy confines of the increasingly phantasmagorical library.
Doug, a deeply confused genealogist, is our guide. He introduces us to 93-year-old Hiram, the tyrannical firstborn brother from hell; Zachary, the giant bully; Chuck, the authoritarian prosecutor with a borderline personality; and Max, the opiated botanist whose trance-induced outbursts usher in the ominous ritual elements that lead to the evening's grisly climax. A hundred brothers are too many brothers: much of the novel is a farrago of collisions, thrown elbows and smashed objects. There is drinking, pornography, dope smoking, gambling, indoor football and, in the wee small hours, homosexual cruising among the library stacks.
Doug attempts to put a commonplace face on these goings-on. ''In this or any family certain moods and states of mind will be dominant and chronic to the extent that they are no longer perceivable as moods, but as routine personality traits, shared attributes,'' he explains reasonably as the boys convene. Later, however, Doug's propensity for psychobabble acquires ominous overtones. ''Isn't feeling better, in a general way, what blood sacrifice is for?'' he asks. When his late father begins to scold him from a head-shaped water stain on the ceiling, we know things will not end well.
Another shade haunts ''The Hundred Brothers'': Donald Barthelme's great short novel ''The Dead Father,'' and especially its book within a book, ''A Manual for Sons.'' Mr. Antrim shares with Barthelme a love for sarcasm laced with pathos and an ability to combine serious themes with demonic parody. If he is not yet the entertainer that Barthelme was, Mr. Antrim is infusing real energy into a mode that seems to have been flagging.
''The Hundred Brothers'' inspires admiration, but it remains a miniature achievement. The book's satirical points of reference are primarily literary and psychoanalytic rather than topical or moral, and an air of detached gamesmanship hovers over its enterprising improvisations. Are the 100 disorderly and narcissistic brothers analogous to the men of the baby boom? Is the decay of their house a commentary on the downfall of patriarchal authority? Perhaps, but these possibilities are nothing more than vague hints floating in the murk of Mr. Antrim's bravura nightmare. In another novel about fathers and sons, Melville's ''Pierre,'' the title character, dreaming, ''started from his chair, and woke from that ideal horror to all his actual grief.'' Finishing this self-contained dream, I rose from my chair unmoved.
Hal Espen, a former fiction editor at The New Yorker, is now the features editor at Outside magazine.