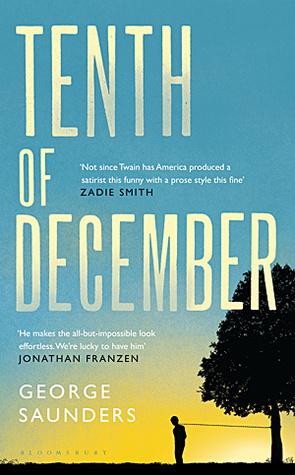 
The first time I finished Tenth of December was in a cafe in Notting Hill over a quite ordinary breakfast, and I cried. This is the only time, apart from childhood scrapes and relationship woes that I have ever wept in public – and this time, it was over a 30-odd page short story. In amongst the clash of prams and the chaos of jammy-fingered children, I sat with my ignored breakfast, a little wobbly-eyed, and thought about people.

The 10 stories in Tenth of December, by George Saunders, are all about people. No matter how weird the setting – a futuristic prison lab, a middle-class home where human lawn ornaments are a great status symbol – Saunders’s stories are always about humanity and the meaning we find in small moments, in objects or gestures. He paints painful portraits of domesticity, of families, of death. It could be described as melancholically happy, each story full of little truths that make us both amused and very uneasy.
Each time I’ve read the stories, I have found the first and the last of them to be the strongest. Victory Lap, the first in the book, is a perfectly crafted tale told from three perspectives: the girl pottering around the house alone on a quiet afternoon; the unnamed man who comes to abduct her in his van; and the neurotic boy across the road, who considers what to do as he watches the abduction unfold from his yard. The last in the book, the titular Tenth of December, follows an awkward, chubby boy acting out his imaginary adventures in a snowy park alone, and a older man with an untreatable cancer, who in a moment of desperate lucidity, has arrived to let the cold kill him. It is only around 30 pages long, but the quiet intensity of the final scene can drive one to tears – even in a place as public as, say, a bustling London cafe.
Saunders is a master of telling description. Of one character: “He was like the bed at a party on which they pile the coats.” Or a man thinking about the aftermath of fighting with his wife: “… that feeling, that feeling of being accepted back again and again, of someone’s affection for you expanding to encompass whatever new flawed thing had just manifested in you.” Or describing a bout of drug-induced sex: “We were all over each other in the super-friendly way of puppies, or spouses meeting for the first time after one of them has undergone a close brush with death.”
In an article for GQ in 2005, Saunders wrote: “What a powerful thing to know: That one’s own desires are mappable onto strangers.” It’s exactly this sensation that lends such heft to his writing: the countless, gentle sentences that pop out of his stories, sparking flashes of internal recognition – I do that! I’ve thought that before! – with such sweet clarity that you cannot help but feel completely, uncomfortably understood.
We tend to consider ourselves exceptionally superior in amongst the faceless masses; we’re the stars of our own TV show, and everyone else is a bit part – less complex, less nuanced than ourselves. It’s almost reassuring to believe that no one can think like you can: no one does this thing but me. But the picture Saunders paints of humanity is one that is united by its messiness, pettiness, self-awareness; but blessed with an inherent, irrepressible goodness that only needs the right test to expose it, sometimes one as little as being able to pay the bills, or sometimes as big as killing yourself to stop someone else dying.
Tenth of December is a wonderful antidote to any rubbish Christmas reading: a book to reset any dwindling love for fiction, one that can easily restore one’s sense of awe at what can be achieved by a great writer in a couple of pages.
But I want to share it particularly at this time of year because it’s just past Christmas: our presents are unwrapped and our eggs are no longer nogged. After a month of work parties, traffic jams, airport kerfuffles, we’re all a bit tired of people, even the ones we love most. It’s natural. And at the end of a year that also feels like the beginning of a great many new things – new world dynamics, new daily worries – there is great comfort in Saunders and the sweet sensation his sentences bring; of feeling known and recognised, that with all our unique human quirks, we are in no way unique. This is a book that will make you love people again.