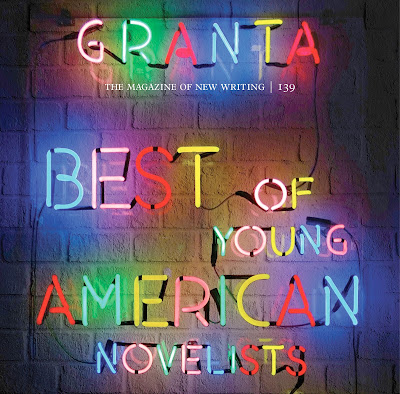 G
iven how brief his occupation of the White House has been, you wouldn’t necessarily have expected Donald Trump to appear in Granta’s latest anthology of “best” young American novelists. Yet here he is on page 82, blundering his way into Mark Doten’s novel in progress, Trump Sky Alpha. Written in immense run-on sentences that owe a debt to David Foster Wallace, the piece, one of the volume’s best and certainly its most attention-grabbing, imagines Trump rising from the White House at the helm of a 1,000ft luxury zeppelin while pontificating to the nation via a YouTube feed. Oh and nuclear apocalypse is raging in the background. No one would call Doten a subtle writer, but he is assuredly engaged with the here and now.

On the whole, however, that isn’t something the writers in this anthology do very much. Novelists aren’t journalists. Their works aren’t duty-bound to be barometers of a nation’s “mood”. Yet from a collection of America’s “best” young writers, one would expect some sort of portrait of society to emerge, a sense of what the country – after eight years of Obama, and now with Trump at its helm – has become. You’d expect to find stories about the extremely rich, or the very poor, or about police beatings or white supremacists. Yet these pieces mostly avoid such matters. It’s as if the social environment from which these authors sprung has been marginalised, pushed out of view. (The one exception is the subject of terrorism, which crops up several times.)
So what do they offer instead? One of the striking thing about these pieces is how inward looking they are. Most deal with characters in cut-off or otherwise isolated states, in frightening, bemusing situations. Relationships are rare. There are few marriages, hardly any children, almost no jobs. Several stories are set in the future; not in familiar post-apocalyptic worlds but strange, elliptical ones whose configurations aren’t clear. One (highly accomplished) example is Jen George’s Revolutions, an account of a love affair in a society where a sinister underground “party” has the power to send notices terminating relationships by courier. Another (less successful) effort is Rachel B Glaser’s Day 4, in which a young woman finds herself on the lam in a world were “no one gets married any more”.

When Granta’s second Best of Young American Novelists anthology appeared in 2007, only a few of the pieces bore avant-garde influences. In this new volume, the count is much higher. Lyrical realism is certainly represented – by Emma Cline’s lovely piece about a destitute actor in Los Angeles, by Yaa Gyasi’s Leaving Gotham City, a biting tale of immigrant disillusionment – but it is the exception rather than the rule. Even when the stories aren’t “difficult”, there is evidence of a desire, as with Claire Vaye Watkins’s I Love You But I’ve Chosen Darkness, to push the boundaries of language, to break into new registers and syntactical arrangements.

How much is this the result of a fundamental shift in what young American writers are attempting and how much does it simply reflect the tastes of Granta’s current editors and the panel of writers (Paul Beatty, Patrick deWitt, AM Homes, Kelly Link and Ben Marcus) chosen to assist them? It is hard to say. But on the basis of this collection, something seems to be happening in American fiction – a new openness to experimentation, a hunger for radically new forms of expression.
Whether or not this is a good thing is perhaps too early to say, but it is producing some breathtaking work. Along with Trump Sky Alpha and Jen George’s Revolutions, the volume’s standout piece, for me, is Ben Lerner’s Bright Circle. Lerner is best known as an exponent of the trendy auto-fiction genre (his novels tend to be narrated by young writers called Ben), but there is nothing auto-fictive about his portrait of Dale, a young man with learning difficulties whose view of the world is fractured and whose life story, as it emerges in broken snatches, is one of cruelty and victimisation. Fiercely intelligent but underpinned by great sympathy, it’s one of the most haunting pieces of prose I’ve read for a long time.
• Granta: Best of Young American Novelists 3 is published by Granta (£12.99).