Kazuo Ishiguro wins the Nobel prize in literature 2017
The British author behind books including Man Booker winner The Remains of the Day takes the award for his ‘novels of great emotional force’
Hannah Ellis-Petersen and Alison Flood
Friday 6 October 2017 00.49 BST

The British author Kazuo Ishiguro said he was both honoured and “taken completely by surprise” after he was named this year’s winner of the 2017 Nobel prize in literature, even initially wondering if the announcement was a case of “fake news”.
Ishiguro, author of novels including The Remains of the Day and Never Let Me Go, was praised by the Swedish Academy for novels which “uncovered the abyss beneath our illusory sense of connection with the world” and were driven by a “great emotional force”.
Despite being among those tipped for the prize, whose previous winners include Seamus Heaney, Toni Morrison, Doris Lessing and Pablo Neruda, Ishiguro told the Guardian he had been completely unprepared for the announcement and had even doubted at first if it was true.
“You’d think someone would tell me first but none of us had heard anything,” said Ishiguro, who had been sitting at his kitchen table at home in Golders Green in London about to have brunch, when he got the call from his agent.


“It was completely not something I expected, otherwise I would have washed my hair this morning,” he said with a laugh. “It was absolute chaos. My agent phoned to say it sounded like they had just announced me as the Nobel winner, but there’s so much fake news about these days it’s hard to know who or what to believe so I didn’t really believe it until journalists started calling and lining up outside my door.”
Ishiguro, who was born in Nagasaki in Japan but moved to the UK when he was five, said he was “tremendously proud” to receive the award and emphasised how much he hoped it would be a force for good at a time of global instability.
“This is a very weird time in the world, we’ve sort of lost faith in our political system, we’ve lost faith in our leaders, we’re not quite sure of our values, and I just hope that my winning the Nobel prize contributes something that engenders good will and peace,” he said. “ It reminds us of how international the world is, and we all have to contribute things from our different corners of the world.”
With names including Margaret Atwood, Ngugi Wa Thiong’o and Haruki Murakami leading the odds at the bookmakers, Ishiguro was a surprise choice and he admitted one of his first thoughts had jumped to fellow living authors he felt were equally deserving of a Nobel.
“Part of me feels like an imposter and part of me feels bad that I’ve got this before other living writers,” said Ishiguro. “Haruki Murakami, Salman Rushdie, Margaret Atwood, Cormac McCarthy, all of them immediately came into my head and I just thought wow, this is a bit of a cheek for me to have been given this before them.
“And because I’m completely delusional, part of me feels like I’m too young to be winning something like this. But then I suddenly realised that I’m 62, so I am average age for this I suppose.”
However, any concerns over Ishiguro’s win creating friction in the literary world were quickly appeased as authors such as Rushdie were among the first to offer their congratulations. “Many congratulations to my old friend Ish, whose work I’ve loved and admired ever since I first read A Pale View of Hills,” Rushdie said. “And he plays the guitar and writes songs too! Roll over Bob Dylan.”
Ishiguro, who is currently “very deep” into writing his latest novel, which he is juggling alongside film, theatre and graphic novel projects, also expressed concern at the distracting burden of celebrity that the Nobel prize might bring and impact on his writing.
He said: “I’m hoping it doesn’t mark some kind of end. I’ve had to battle a lot of my writing life between the demands to be a public celebrity author and finding the time and space to do the real work, so I’m hoping the work itself just continues and is no different to where it was yesterday.
“I just hope I don’t get lazy or complacent, I hope my work won’t change. And I hope that younger readers aren’t put off by the Nobel. I have GCSE people reading my books and I’m very proud to have that younger audience.”

Ishiguro studied creative writing at the University of East Anglia, going on to publish his first novel, A Pale View of the Hills, in 1982. He has been a full-time writer ever since. According to the Academy, the themes of “memory, time and self-delusion” weave through his work, particularly in The Remains of the Day, which won Ishiguro the Booker prize in 1989 and was adapted into a film starring Anthony Hopkins as the “duty-obsessed” butler Stevens.
Addressing Ishiguro’s Nobel win, the former poet laureate Andrew Motion, said: “Ishiguro’s imaginative world has the great virtue and value of being simultaneously highly individual and deeply familiar – a world of puzzlement, isolation, watchfulness, threat and wonder.
“How does he do it?” asked Motion. “Among other means, by resting his stories on founding principles which combine a very fastidious kind of reserve with equally vivid indications of emotional intensity. It’s a remarkable and fascinating combination, and wonderful to see it recognised by the Nobel prize-givers.” 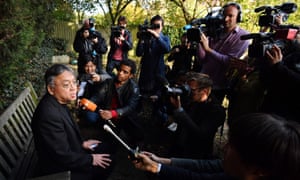 Ishiguro holds a press conference outside his London home after the win.
Photograph: Ben Stansall/AFP/Getty Images


Will Self, meanwhile, reacted to Ishiguro’s win in characteristically lugubrious fashion.
Self said: “He’s a good writer, and from what I’ve witnessed a lovely man, but the singularity of his vision is ill-served by such crushing laurels, while I doubt the award will do little to reestablish the former centrality of the novel to our culture.”
The Nobel prize for literature comes with winnings of 9m Swedish krona (£832,000). Permanent secretary of the academy, Sara Danius, spoke to Ishiguro about his win around an hour after the announcement. It was a marked change to previous winners such as Bob Dylan, who took weeks to acknowledge the accolade, and Doris Lessing, who famously responded with a derisive “oh Christ” when the news was broken to her by reporters.
“He was very charming, nice and well-versed, of course. He said he felt very grateful and honoured, and that this is the greatest award you can receive,” said Danius.
“He is someone who is very interested in understanding the past, but he is not a Proustian writer, he is not out to redeem the past, he is exploring what you have to forget in order to survive in the first place as an individual or as a society,” she said, adding, in the wake of last year’s uproar over Dylan’s award, that she hoped the choice would “make the world happy”.
“That’s not for me to judge. We’ve just chosen what we think is an absolutely brilliant novelist,” she said.