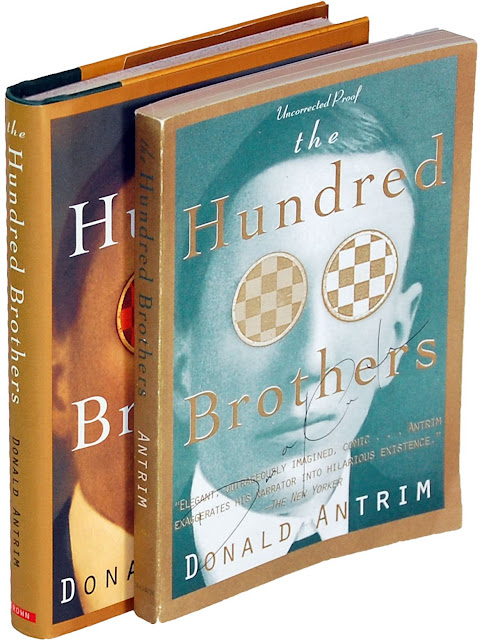 
Surrealism is alive and well in the antic universe of Antrim's fiction. This second novel of a projected trilogy (Elect Mr. Robinson for a Better World, 1993) begins with an audaciously absurd conceit and rings an impressive number of changes on it. Doug, the frantic narrator, gathers with 98 of his 99 brothers (including Zachary, ``the Giant''; Pierce, the ``designer of radically unbuildable buildings''; Milton, ``the channeler of spirits who speak across time''; and the celebrated ``perfect'' brother, Benedict, famous for his work on the ``sexual language'' of social insects) in their deceased father's library to ``put the past behind us, share a light supper, and locate, if we could bear to, the missing urn'' of their progenitor's ashes. The youngest son is in his mid-20s, the oldest in his 90s. Only George, the urban planner, is missing, having recently vanished ``with a girl named Jane and an overnight bag packed with municipal funds in unmarked hundreds.'' George is only one of the topics of conversation as the brothers, waiting impatiently for dinner to be announced, inevitably reanimate old grievances and competing loyalties. Doug, a rebel and openly disdainful of their father, inspires a series of bitter clashes among family factions. There are accidents as the brothers, packed into the library, begin to grow restive. Finally, also inevitably, violence breaks out, and the hapless Doug is at the heart of the increasingly violent (if slapstick) family feud. The plot, of course, is secondary here: What matters is Antrim's ability to keep an impossible concept spinning, to come up with more and more outrageous variations, and he does exactly this in a wonderfully calm and assured manner. Few writers can match his inventiveness or his determination to remind us that the best fiction can be simply about the pleasure that comes from the free play of the imagination. Another unique work from the most delightfully idiosyncratic of young American writers.