Playboy founder Hugh Hefner, whose Bacchanalian parties have become the stuff of legend, is coming to London to celebrate his 75th birthday.
Mr Hefner will visit the capital in May as part of a European "grand tour" taking the Cannes Film Festival and visits to Milan and London.
Avalon PR, the public relations company that worked on TV show Popstars, has been appointed by Playboy Enterprises to handle media relations for Mr Hefner's tour.
Avalon last year ran a campaign in to raise the Playboy's profile that coincided with the launch of Playboy casinos.
"The Bunny's Back" campaign saw 400 wannabe bunny girls - eager to don the corset, fishnet tights, bow tie and floppy ear uniform - lining up in Leicester Square to audition.
When the Playboy bandwagon hits London, Mr Hefner will hit the town. He will be shopping, eating and partying his way around London, with ample opportunity for photo opportunities and media interviews.
THE GUARDIAN

Posted by Ficciones at Thursday, March 22, 2001 No comments: 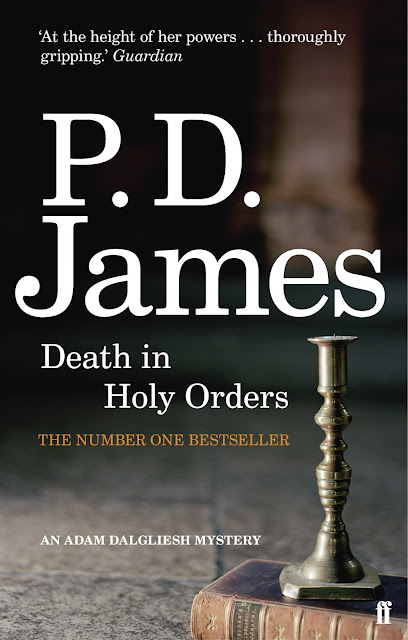 Adam Dalgliesh does it again

PD James is back on form with the latest in the Adam Dalgliesh series, Death in Holy Orders

Death in Holy Orders
PD James
Faber and Faber £17.99, pp387
With Death in Holy Orders, PD James has returned to the crime novel seemingly rejuvenated by her recent journey into memoir. Following one or two rather uninspired fictional works, Adam Dalgliesh's latest outing marks a comprehensive return to form and possesses the confident interplay of classical discipline, contemporary morality and strong evocation of place that had hitherto distinguished James's novels in an increasingly overpopulated genre.
Writing for the most part within the conventions of the detective story, she has again proved its constraints to be a liberating force for the creative imagination, drawing on accepted generic elements - the central mysterious death, the closed circle of suspects - to produce a thoughtful, beautifully-written book which is far more complex than the sum of its parts.
Set in the claustrophobic atmosphere of an isolated Anglican theological college, Death in Holy Orders takes Dalgliesh back to his boyhood retreat to re-examine the accidental death verdict on a young student whose body has been discovered on the beach, smothered by a fall of sand.
Treating it as little more than a political exercise to satisfy a powerful parent, Dalgliesh, who has a convenient tendency to holiday at sites of suspicious death, looks forward to a nostalgic few days but is faced instead with an institution on the brink of extinction, its faith brought into question by the changing priorities of the modern church. As more deaths follow, including the brutal murder of the archdeacon, James builds an intense picture of the fear, rage and desperation experienced by a community under threat.
Her primary concern is invariably to expose the levelling quality of murder, the way in which it temporarily removes the supports of law and religion and faces people with the truth about themselves. But it is more than the murderous mind that interests her; ironically, the strength of this new book lies not so much in the revelation of the killer's motive as in the reasoning behind less extreme acts of kindness, love and hate. Even Dalgliesh, ever the most detached of men, is not immune: in his return to the place of his childhood and the awakening in him of compassion and sexuality, James has written an elegy to the complexities of human behaviour.
Whether it is the Thames or the East Anglian landscape, James has always been entranced by her setting and never more so than when describing the Suffolk coast. Here, the skies, the sea, the light are not so much a backdrop as a powerful testament to the enduring hold of the past, against which more transient human dramas are played out.
Moreover, in St Anselm's - isolated and exposed to the elements - she has created a perfect fusion of theme and setting: the physical erosion of its bricks and mortar are matched, blow for blow, by the more symbolic demise of an old style of faith and the emergence of a twenty-first century creed that has no place for mystery or for art, no desire for heaven and no fear of hell.
James has by no means traded in the whodunit for a discussion on the future of the Church of England (Death in Holy Orders is as consummately plotted as any of her books), but she has added another dimension to the genre, one that refuses to indulge in the comforting illusion that death is a mystery which can be solved or that law and justice are inevitably the same thing.