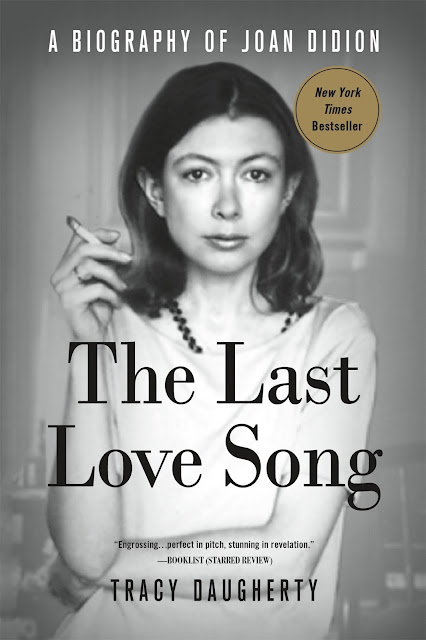 ‘Style is character,’ observed Didion, whose fanbase keeps widening. But what lies beneath that cool, unsmiling facade?

M
ore than with most other long biographies, reading Tracy Daugherty’s The Last Love Song feels like traversing a large continent on foot. The book passes through its own weather systems, from a crisp intro, depicting the youth of its subject, Joan Didion, in Sacramento, California, during the 1930s and 40s, through her fecund early working years in Manhattan and on into the hot, gritty, apocalyptic dog days of 1960s Los Angeles, whose bard Didion became. Then comes the greying climate of late middle age and the bare-branched present, leaving Didion, now 80, mourning the deaths of both her husband and adopted daughter, losses she wrote about in two of her most successful non-fiction books, The Year of Magical Thinking and Blue Nights. The Last Love Song has its share of dull stretches, too: periods of endless, flat landscape as Didion and her husband, John Gregory Dunne, host gourmet dinner parties with boring Hollywood celebrities, get involved in the production of mediocre movies and think deep thoughts about swimming pools and Vietnam.

Presiding over this journey, bathing it in a cool blue light, with a face as round, pale and unsmiling as a moon that never sets, is Didion herself. She is as remote as the moon, too, because Daugherty was unable to secure her cooperation in researching his book. No matter, Didion has written copiously about herself, and Daugherty also believes that she is a mirror of sorts for American society in the 20th century (and a little beyond). “Her life illuminates her era,” he writes, “and vice versa.” So The Last Love Song features a steady stream of historical signposts: the Kennedy assassinations, the Manson family killings, the Patty Hearst kidnapping, Jonestown, the Iran-Contra scandal, 9/11 etc. Each is explained in considerable depth, with occasional interjections noting that Didion surely read about the event, even when she didn’t write much about it.
Raised in the dowdy state capital by a mother who “‘gave teas’ the way other mothers breathed”, Didion was taught to think of herself as the genteel scion of pragmatic pioneers. She was a Goldwater conservative well into the 1960s, and adored John Wayne, the sort of man who knew how to protect a well-bred young woman on a bleak frontier. After a few years working in magazine journalism in New York City, she married Dunne and the two moved back west to try their hand in the film business. There, in a huge, ramshackle house on LA’s Franklin Avenue, in a neighbourhood populated by rock musicians, aspiring actors, self-help cults and drug dealers, Didion was perfectly positioned to watch the madness that descended on the city in the late 60s. Her encounters with this scene led to the non-fiction pieces, collected in Slouching Towards Bethlehem, that made her reputation as one of the few women enshrined in the pantheon of New Journalism, alongside the likes of Tom Wolfe, Gay Talese and Norman Mailer.
Eventually, the couple would move to Malibu (boho chic), Brentwood (suburban chic) and finally, in 1988, back to New York – migrations chronicled by Didion in various essays. Yet for all her autobiographical writing, she remains notoriously elusive. Critics complained that the grief memoir Blue Nights left them unclear on what caused the death of Didion’s daughter, Quintana, at the age of 39. Lingering questions prompted people Daugherty describes as “internet snarkers” to speculate that the writer is “in denial” about Quintana’s alcoholism and the mood disorder that probably drove it. “There is the biographer who promises explanations by threatening to reveal a subject’s secrets, who promises to dish,” Daugherty sniffs in the preface. “I am not that biographer.” But what if you suspect that what your subject leaves unspoken could be the thing that most motivates her? How can you fail to pursue such a lead? So Daugherty drops hints about Quintana’s alleged substance abuse and suggests that Didion might have had an abortion in her 20s while living in New York and dating an unlandable man-about-town named Noel Parmentel. Perhaps that procedure (still illegal in the 1950s) led to her inability to conceive and the adoption of Quintana – whose birth family was described by a Dunne relative as a “troubled lot”? And perhaps that is why a devastating abortion features so prominently in Didion’s second novel (her first real success in the form), Play It as It Lays. Perhaps. We’ll never know, and neither, it seems, will Daugherty.

The biographer did, however, succeed in interviewing Parmentel at length, and one of the strongest parts of The Last Love Song asserts that Didion’s years working at Vogue (the time during which she was dating him) was when her talent first took its distinctive form. Vogue, he insists, schooled her in forging taut, active, confident prose. Parmentel introduced Didion to Dunne – telling her, “This is the guy you ought to marry” – as well as everyone else the self-identified westerner needed to know around town. (Parmentel stopped speaking to Didion in the mid-70s, convinced that a character in her novel A Book of Common Prayer was a cruel portrait of himself.) He also instantly recognised her exceptional commitment to her writing. “I never saw ambition like that,” he said. “It was ferocious.”
You would not know it to look at her, though. In photographs and interviews, she appeared tiny, fragile, listless and glum, even when posing next to her curvy Corvette, a model of sports car also driven by Maria, the pretty, passive main character in Play It As It Lays. Daugherty stresses that this neurasthenic persona was just that – a well-crafted mask not to be confused with its wearer. Where The Last Love Song falls short is in Daugherty’s inability to track the continuity between this persona and the ladylike matron Didion was raised to become. She worked obsessively, and, with Dunne, aggressively cultivated the most fashionable circle of acquaintances and friends. (Christopher Isherwood dismissed the couple as “strivers”.) Yet she looked and behaved as if she were too sensitive and exhausted to leave the house. She had mastered the supremely feminine art of avidly pursuing the world while appearing to want nothing, nothing at all.

“Style is character,” is one of Didion’s famous observations, and it has two edges. There is her style in prose, justly celebrated for its steely, minimalist elegance. And there is also her personal style, her cool way of appearing in the world, which prompted the clothing company Céline to make her the face of its spring 2015 line. Her resurgent fanbase seems as enamoured of the latter as it is of the former – it seems, in fact, often unable to distinguish the two. But they are separate. Didion’s late career – especially the great, disillusioned, borderline-paranoid political essays and reportage she has written for the New York Review of Books – testifies to her growing mistrust of facades, including those that present the semblance of disruption, change and the unprecedented. Pay better attention, she keeps on saying, or at the end of this trip, you’ll end up right back where you started.
THE GUARDIAN