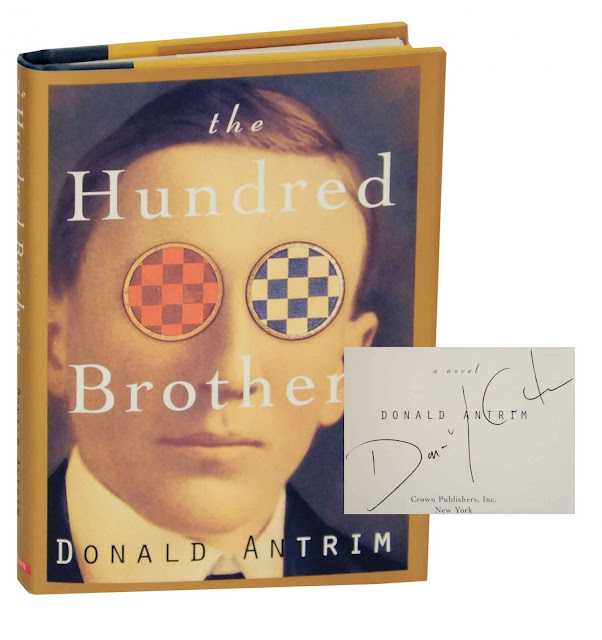 
The first sentence of Antrim's hallucinatory, grimly funny and esoteric second novel (following Elect Mrs. Robinson for a Better World) is a feat of absurdist humor and wordplay. In a single, three-page paragraph, Antrim introduces his cast of 100 brothers, ranging from doddering 93-year-old Hiram to Sergio, ""the caustic graphomaniac,"" Mongo, ""the really bad womanizer,"" Maxwell, ""the tropical botanist, who, since returning from the rain forest has seemed a little screwed up,"" and the narrator, Doug, a crazed genealogist. They have all gathered in the byzantine library of their crumbling ancestral estate to ""share a light supper"" and discuss their deceased father. Like a Beckett play interlaced with elements of a medieval heroic chronicle and the comic anarchy of a Marx Brothers routine, the novel follows Doug, a kind of authorial stand-in, as he wanders about the library, wreaking havoc, discoursing on bloodlines and inheritance and observing his brothers' bullying, grousing and violent skirmishes. Leading an after-dinner football game, Doug, who gradually proves himself the most demented of the clan, sheds his clothes and proclaims himself the Corn King, an ancient, sacrificial harvest spirit. The novel ends as Doug dashes through the library, past shelves of Cavalier poets, minor Elizabethans, 19th-century novelists and war poets, imagining that his brothers are chasing him with clubs and knives, intent on tearing him limb from limb. Drunk with language and surreal humor, Antrim's allegory never really coheres. One suspects that he views this novel as a kind of sacrificial goat in its own right, one that only readers with a strong sense of the perverse are likely to enjoy. And that's probably the point. First serial to the New Yorker. (Feb.)