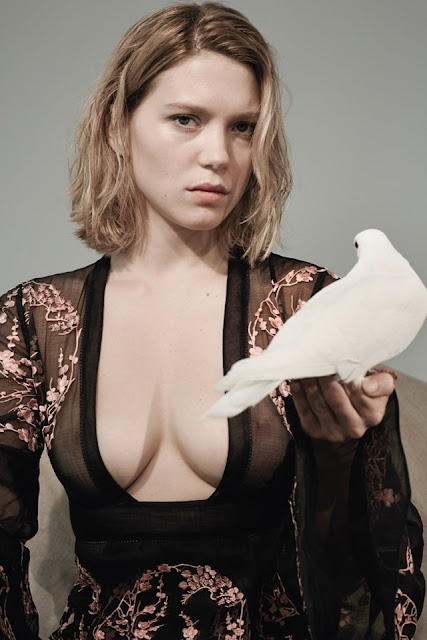 'I had to defend myself': the night Harvey Weinstein jumped on me

All throughout the evening, he flirted and stared at me as if I was a piece of meat. Then he lost control, writes the award-winning actor Léa Seydoux

I
meet men like Harvey Weinstein all the time. I have starred in many films over the last 10 years and have been lucky enough to win awards at festivals like Cannes. Cinema is my life. And I know all of the ways in which the film industry treats women with contempt.

When I first met Harvey Weinstein, it didn’t take me long to figure him out. We were at a fashion show. He was charming, funny, smart – but very domineering. He wanted to meet me for drinks and insisted we had to make an appointment that very night. This was never going to be about work. He had other intentions – I could see that very clearly.
We met in the lobby of his hotel. His assistant, a young woman, was there. All throughout the evening, he flirted and stared at me as if I was a piece of meat. He acted as if he were considering me for a role. But I knew that was bullshit. I knew it, because I could see it in his eyes. He had a lecherous look. He was using his power to get sex.
He invited me to come to his hotel room for a drink. We went up together. It was hard to say no because he’s so powerful. All the girls are scared of him. Soon, his assistant left and it was just the two of us. That’s the moment where he started losing control.

We were talking on the sofa when he suddenly jumped on me and tried to kiss me. I had to defend myself. He’s big and fat, so I had to be forceful to resist him. I left his room, thoroughly disgusted. I wasn’t afraid of him, though. Because I knew what kind of man he was all along.
Since that night in his hotel room, I’ve seen him on many other occasions. We are in the same industry, so it’s impossible to avoid him. I’ve seen how he operates: the way he looks for an opening. The way he tests women to see what he can get away with.
He also doesn’t take no for an answer. I once went with him to a restaurant and when he couldn’t get a table he got angry and said: “Do you know who I am? I am Harvey Weinstein.” That’s the kind of man he is.
I’ve been at dinners with him where he’s bragged openly about Hollywood actresses he has had sex with. He’s also said misogynistic things to me over the years. “You’d be better if you lost weight,” he said. That comment shocked me.

One night, I saw him in London for the Baftas. He was hitting on a young woman. Another time, at the Met Life ball, I saw him trying to convince a young woman to sleep with him. Everyone could see what he was doing.
That’s the most disgusting thing. Everyone knew what Harvey was up to and no one did anything. It’s unbelievable that he’s been able to act like this for decades and still keep his career. That’s only possible because he has a huge amount of power.
In this industry, there are directors who abuse their position. They are very influential, that’s how they can do that. With Harvey, it was physical. With others, it’s just words. Sometimes, it feels like you have to be very strong to be a woman in the film industry. It’s very common to encounter these kinds of men.
The first time a director made an inappropriate comment to me, I was in my mid-20s. He was a director I really liked and respected. We were alone and he said to me: “I wish I could have sex with you, I wish I could fuck you.”

He said it in a way that was half joking and half serious. I was very angry. I was trying to do my job and he made me very uncomfortable. He has slept with all of the actresses he filmed.
Another director I worked with would film very long sex scenes that lasted days. He kept watching us, replaying the scenes over and over again in a kind of stupor. It was very gross.
Yet another director tried to kiss me. Like Weinstein, I had to physically push him away, too. He acted like a crazy man, deranged by the fact that I didn’t want to have sex with him.
If you’re a woman working in the film industry, you have to fight because it is a very misogynistic world. Why else are salaries so unequal? Why do men earn more than women? There is no reason for it to be that way.
Hollywood is incredibly demanding on women. Think about the beauty diktats. All of the actresses have botox at 30. They have to be perfect. This is an image of women that is bizarre – and one that ends up controlling women.
This industry is based on desirable actresses. You have to be desirable and loved. But not all desires have to be fulfilled, even though men in the industry have an expectation that theirs should be. I think – and hope – that we might finally see a change. Only truth and justice can bring us forward.
THE GUARDIAN