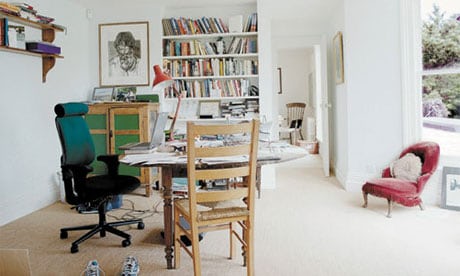 When I moved into this room, not very long ago, I imagined I'd put a long desk against the wall, as the previous owner had. But as I don't have a long desk and there was nowhere to put this round table, I decided to try writing at it. For the last few years I've worked in a rented room. There was nothing in it except a table and a bed - I vowed I'd never lie on the bed and once fell asleep on the floor - but I worked really well there, facing a blank wall, so I felt superstitious about being in a room full of objects and with such a beautiful view of the garden. But I like it.
The etching on the wall is by my father, Lucian Freud. It has a wise, serene feeling about it. Below it is a photo of my husband David and our children on the set of a film he was making in the Louisiana swamp, and beside that a photo he took of the Suffolk marshes. The green cupboard and the shelf behind my desk I bought in Golborne Road, the scruffy end of Portobello Road market. I used to live near there, and on the shelf are old notebooks from before I really started to write. There are also some translated copies of my books. I like seeing the Chinese and Hebrew writing.

The red chair is from Golborne Road too. I bought it for my daughter's bedroom, but it's ended up in here. On my desk is a calendar I use as a diary and lots of sheets of paper I scribble on when I'm writing - notes about the book I'm working on, or a reminder to call the dentist. There's an in-tray which I bought recently. Once something goes in, it never seems to come out, so mostly I spread things around the table if they really need to get done. I'm amused to see my running shoes, which make it look as if I spring from my desk and start jogging, which is only very occasionally true.
I don't need any of these things, just my green chair and my laptop. which is raised up on an old copy of Spotlight.

Posted by Ficciones at Saturday, November 25, 2017