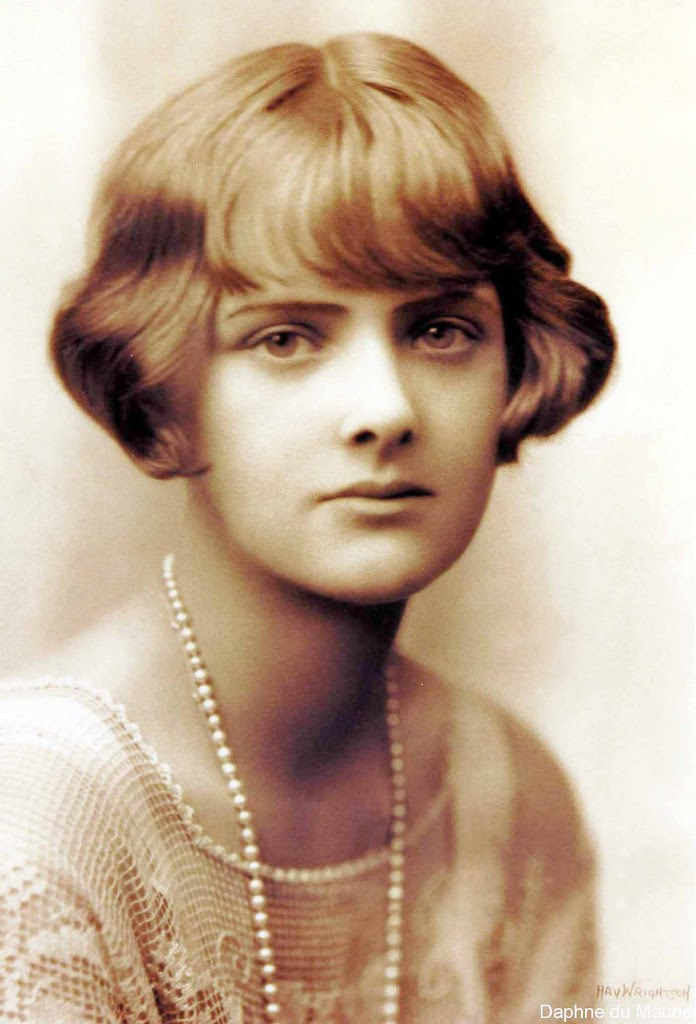 It was the summer of 1929 when aspiring British writer Daphne du Maurier took to the seas with Long Island’s investment banker millionaire known as the “King of New York,” who left his Huntington home, Oheka Castle—a name he created using his initials, Otto Hermann Kahn—to take a party of travelers on a tour of Scandinavian waters aboard a yacht he chartered for the occasion.

“We sailed through the Kiel Canal to Gothenburg, and thence to Denmark, Sweden and Norway and the fjords,” wrote Daphne in a diary she kept of the trip. “Otto Kahn was the most wonderful host and a great conversationalist…a truly remarkable man.”

The future Rebecca and My Cousin Rachel author, sent on the excursion by her wealthy family—which included her prominent actor father Sir Gerald du Maurier and grandfather, author and Punch cartoonist George du Maurier, didn’t want to go. She wouldn’t know anyone and “it would mean buying new clothes.” But the 22-year-old reluctantly went and had a fabulous time, even playfully rejecting uninvited romantic advances from Kahn, nearly three times her age, by taking her clothes off and diving nude into the water.

“A daring maneuver, but it worked,” she wrote. “He was in his sixties and did not attempt to follow my example. The attentions were more muted afterwards.”

But Kahn wouldn’t give up entirely, offering to buy Daphne a fur coat.

“This I declined, asking for a dagger instead, and the same dagger reposes on my desk today,” she continued. “One never knows when it might come in useful.”

Daphne’s dark sense of humor would become a cornerstone of her literary work combining beautiful prose with sinister undertones. She would release her first novel, The Loving Spirit, in 1931, then go on to pen dozens of screenplays, novels, biographies and short stories, includingThe Birds, which inspired Alfred Hitchcock’s 1963 suspense film of the same name. But it was her 1938 gothic thriller romance, Rebecca, that garnered her international fame and brought her to LI’s shores, where she would meet a woman who embodied one of her fictional characters and inspire her next bestseller.

By 1946, Daphne had become known for delicately weaving suspenseful tales in the confines of mythological estates by the sea, ones that harbored spirits of the psyche and Edgar Allan Poe-like characters, their lives playing out in bone-chilling and otherworldly narratives.

“Last night I dreamt I went to Manderley again… The rhododendrons stood 50 feet high, twisted and entwined with bracken, and they had entered into alien marriage with a host of nameless shrubs, poor, bastard things that clung about their roots as though conscious of their spurious origin,” she describes the haunting Manderley estate in Rebecca. “A lilac had mated with a copper beech, and to bind them yet more closely to one another the malevolent ivy, always an enemy to grace, had thrown her tendrils about the pair and made them prisoners.”

The rhododendrons are described frequently throughout the novel, as a symbol of both evil and female sexuality.

“There was something bewildering, even shocking about the suddenness of their discovery,” she says of the blood-red flowers. “The woods had not prepared me for them. They startled me with their crimson faces, massed one upon the other in incredible profusion, showing no leaf, no twig, nothing but the slaughterous red, luscious and fantastic, unlike any rhododendron I had seen before.”

Rebecca was turned into a film, starring Joan Fontaine and Laurence Olivier. But its success was tempered by a plagiarism suit filed against Daphne by author Edwina MacDonald, who claimed the plot was stolen from her book Blind Windows. It was an accusation Daphne would be forced to answer for in a New York courtroom.

“An American woman claims that I copied a book of hers when I wrote Rebecca (I’d never heard of her or her book, needless to say),” Daphne wrote in a letter to a friend dated Oct. 18, 1942, and described how she didn’t want to “go to New York for my stinking lawsuit.”

“The sword of Damocles” was hanging over her, she wrote in another of a series of letters given to her biographer Margaret Forster by Daphne’s family upon her death. Daphne feared that if she were to lose the case, it would mean “bankruptcy for all.”

In November 1947, Daphne set out on the Queen Mary in cabin B108 to New York. She would stay at Barberrys, the luxurious Mill Neck estate of her American publisher, Nelson Doubleday and his wife, Ellen. The Doubledays had previously offered their 13-acre Cleft Road home overlooking Oyster Bay to Daphne, her husband and three children, as shelter during World War II, but Daphne had declined. Despite her family’s wealth, Daphne lived simply, almost to the point of austerity at times. Just as she didn’t want to sail with Kahn more than a decade earlier, she was not looking forward to an elegant stay in a strange home. This time, she had no choice.

But when Daphne met Ellen, she was overcome. Right before her eyes the phantom character she had dreamed up in Rebecca had come to life. From then on, Daphne referred to Ellen as “Rebecca of Barberrys.”

“Watching you at Barberrys was very hard to bear,” she wrote in a letter to Ellen six weeks after leaving LI. “You looked lovelier every day. It just defeated me.”

Daphne went on in the letter to describe herself as a child: “A little girl… very shy, always biting her nails. But never being a little girl. Always being a little boy. And growing up with a boy’s mind and a boy’s heart.”

Daphne referred to herself as “a half-breed,” a woman on the outside with a “boy in the box” inside. “Then the boy realized he had to grow up,” she told Ellen, “And not be a boy any longer, so he turned into a girl, and not an unattractive one at that, and the boy was locked in a box forever. D. du M. wrote her books, and had young men, and later a husband, and children and a lover, and life was sometimes lovely and sometimes rather sad, but…she opened up the box sometimes and let the phantom, who was neither girl nor boy but disembodied spirit, dance in the evening when there was no one to see…”

Daphne had relationships with both men and women before, but did not consider herself lesbian or bisexual and shuddered at the thought of being labeled.

“By God and by Christ if anyone should call that sort of love by that unattractive word that begins with ‘L’, I’d tear their guts out,” Daphne wrote to Ellen on Dec. 10, 1947. This quote later became one of the inspirations for the title of the Showtime series The L Word.

“Nobody could be more bored with all the L people than I am,” Daphne wrote to Ellen in 1948. “I like to think my Jack in the box was and is unique.”

Daphne and Ellen became extremely close during her stay at Barberrys. While Daphne professed her love for Ellen openly, her host made it clear that although she, too, loved Daphne, they could never be more than good friends. The women would talk for hours in the evening on LI. During the day, Daphne defended Rebecca in a Manhattan court room, an experience she described as “utterly degrading” in a letter to a friend.

“When I got up on that bloody stand,” she said, “I wasn’t just fighting a foolish case for plagiarism, I was fighting all the evil that has ever been, all the cruelty in myself…all the rottenness that is in every one of us.”

She said the prosecution’s lawyer called her “a liar” and this was “so very perceptive of him…my life has been one long lie for as far back as I can remember.”

In January 1948, a judge decided in favor of Daphne. She returned to England, maintaining a close friendship with Ellen by mail. Letters were constantly exchanged between Cornwall and Long Island. Daphne, growing more distant from her husband during this time, wrote a screenplay calledMother, about a woman whose son-in-law falls in love with her.

The play was really about Daphne herself and a British version of Ellen. Daphne continued to visit Barberrys, sometimes for months at a time.

Daphne eventually fell in love with actress Gertrude “Gertie” Lawrence, after meeting during a party at Barberrys. She began dividing her days between time with Ellen on LI and Gertie in Manhattan.

On Aug. 9, 1951, Daphne wrote to Ellen that she would have never left Barberrys “if there had been no iron curtain between us.” But the main character of Daphne’s next novel, My Cousin Rachel, would again be based on Ellen. In another letter, Daphne described the book to Ellen as “rather sinister and a bit creepy and you will never really know whether the woman is an angel or a devil.”

My Cousin Rachel was an immediate bestseller. Ellen, who knew she inspired the character of Rachel, told Daphne it was “one of your masterpieces” and said she saw Daphne in a character hopelessly in love with Rachel.

“In the writing of the novel I turned myself so completely into Philip I was beguiled,” Daphne replied in a letter. “[Rachel] could have poisoned the entire world and I would not have minded.”

More than 50 years later, Mill Neck’s Barberrys has switched hands multiple times, and was sold again privately for $8 million last summer. It is still nestled off West Shore Road, its driveway lined with a wall of towering hedges covered by the tight-lipped buds of rhododendrons.

“The people I write about in books are more real to me than the people I meet, and I try and make people that I meet be as exciting as the people in books,” Daphne wrote in a letter to her daughter in 1954. “But they never are.”