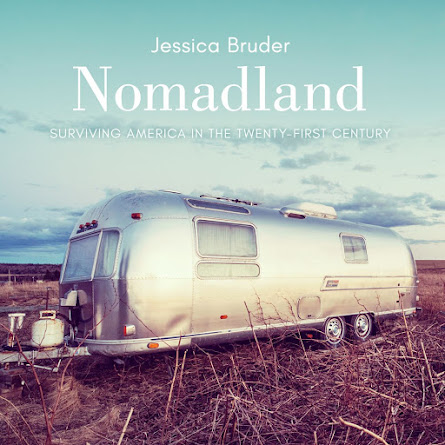 Our March/April 2021 pick for Now Read This, the PBS NewsHour’s book club with The New York Times, is Jessica Bruder’s “Nomadland,” which chronicles the lives of older workers on the road. It served as inspiration for the Oscar-nominated film starring Frances McDormand, which was directed by Chloé Zhao. Become a member of the Now Read This book club by joining our Facebook group, or by signing up to our newsletter.

Journalist Jessica Bruder says she’s seen a lot of great writers’ advice over the years, but one trick that she particularly likes “wasn’t devised for writers.”

The tip came from Linda May, a nomad that Bruder met on the road and chronicled in her 2017 book, “Nomadland.” May also played herself in the recent film adaptation of Bruder’s book.

May told Bruder that when she worked in an Amazon warehouse and felt like quitting, she’d ask herself, “Can I do this for just 10 more minutes?” The answer was invariably, “Of course!”

“This was a strategy she’d picked up from Alcoholics Anonymous, but it works for writing, too,” Bruder told the PBS NewsHour in a recent questionnaire. “It’s a great way to flatten resistance.”

Bruder shared more about her vampire-like writing routines, as well as how her reporting for “Nomadland” eventually developed into a book.

What is your daily writing routine?

Honestly? I’m a vampire bat. When given the choice, I’ll start writing after dinner and go until maybe 2 a.m. There’s nothing like making a hot cup of coffee and firing up my laptop when most people are winding down. The distractions melt away. When I’m in flow, I feel like I’m driving at night on an empty highway, just cruising, sipping that coffee and keeping my eyes on the spot where my headlights break the dark. I used to go really late – until 4 a.m. or so – but that’s gotten harder. Morning people rule our world, making it difficult for night creatures to avoid their influence.

During the day, I’m usually occupied with tasks that don’t require a solitary and trancelike state. I walk the dog, scramble eggs, answer email, spend time with (or at least talk to) people I hope to write about, mess around with narrative structure, edit journalism students’ stories, devise seminars, write pitches, get some exercise, water my unruly plants, etc. I keep a to-do list on paper, and if I’m not hurtling through short tasks as fast as I’d like, I use a timer to stay on track. Sometimes my days crowd out my nights, but I’m happiest when I can maintain some kind of balance between the two.

What is your favorite childhood book? Or one book you think everyone should read?

My mom was a teacher who specialized in early childhood, so our house was always full of books. My favorite was “Swimmy” by Leo Lionni. It’s about a misfit – a black fish in a school of red ones – who swims so fast that he’s the sole survivor of a tuna attack. After exploring the ocean alone, he meets a new bunch of guppies. He helps them get in formation: the silhouette of a giant fish. Together they chase the tuna away. (Think “Spartacus” meets “Finding Nemo,” but better.) I loved the story and also Lionni’s watercolor illustrations, page after page of figurative seascapes. I could have spent hours absorbing all that texture and detail. It felt like dissolving into the pages.

What is something you’ve seen, watched or read that you think is overlooked and deserves more attention?

The 2018 film “Sorry to Bother You” got some attention but deserved more. I’d never seen anything like it: a candy-colored critique of American capitalism, pinballing between satire and full-blown absurdity. The storyline was unapologetically, exuberantly weird. I mean, who else could have pulled off a magic-realism-inflected teardown of the telemarketing industry? And somehow make that hilarious? [Director and writer] Boots Riley is a national treasure.

What is the best piece of writer’s advice you’ve received?

There’s a lot of great advice floating around. Most of it I have a hard time following. One tip I see a lot is “dash off a loose first draft.” That’s the writerly equivalent of “dance like no one’s watching.” I’m no good at it, though, since I tend to move slowly, smoothing sentences and embedding details along the way. I call this approach “building a sandcastle with tweezers.”

There’s one little trick that I like, but it wasn’t devised for writers. It came from Linda May, who I wrote about in Nomadland. She told me about working in an Amazon warehouse, how she often felt like quitting. Whenever that feeling came on strong, Linda asked herself, “Can I do this for just ten more minutes?” The answer was always, “Of course!” This was a strategy she’d picked up from Alcoholics Anonymous, but it works for writing, too. It’s a great way to flatten resistance.

Can you describe the moment you knew you wanted to write this particular book? And when you knew it was over?

In January of 2014, I spent two weeks in the Sonoran Desert outside Quartzsite, Arizona, reporting a story for Harper’s Magazine on transient older workers. One night, while walking away from an outhouse, I got so captivated by all the stars overhead that I tripped over a boulder. Pain radiated from my shoulder. Lying in my tent, I wondered how badly I’d messed up and whether this marked the end of my project. By morning I felt better, but something in my attitude had shifted. I knew I wanted to follow the story as far as I could. I still felt that way when my Harper’s editor, James Marcus, asked if he could show a pre-publication version of the article to a friend in book publishing. Alane Mason at W.W. Norton & Co. liked it. She asked if it could evolve into something longer, to which I replied, “Hell, yes!” Or something to that effect.

Writing non-fiction is weird. When you’re done, the plot keeps going without you. For that reason, it’s rare for me to feel a sense of closure. There’s a deadline. I turn in the manuscript. But I rarely feel finished. That’s especially true for “Nomadland,” since I’ve stayed engaged with the people I wrote about and their stories. It’s still a big part of my life.