An Interview with Betty Tompkins

An Interview with Betty Tompkins

New York artist Betty Tompkins creates powerful, photorealist paintings that have received an array of responses from enthusiastic to aghast. A gallery in Zurich that was showing her work once received a returned postcard sent out for Tompkins’s show with obscenities written all over it, clearly rebuking an invitation they found obscene. They were scribbled so deeply you can feel the indentations of where the pen angrily met the paper. 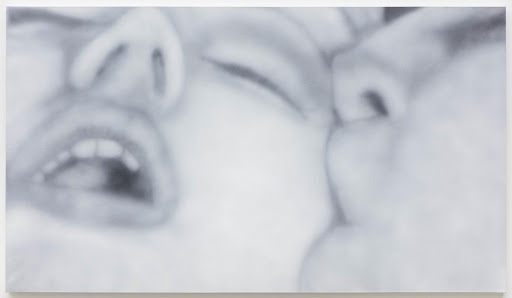 In 1973, two of her paintings slated for an exhibition in Paris were detained at customs for being sexually explicit. Today, however, Tompkins continues a critical ascendance with her first museum solo show at the Kunstraum Innsbruck in Austria (September 20th-November 11, 2017). She is also featured in this year’s Frieze Art Fair in London with other overlooked art (for being sexually explicit as well) from the 70s and 80s. So, even in the midst of blatant disagreement by some with the content of her work, Tompkins lives a life that is unaffected by these responses nor engaging with their verbal posturing associated, either.

I met Tompkins at her SoHo (New York) studio, where she’s been for over 30 years. Having very little knowledge of her work, before attending her show at PPOW in NYC I read reviews by writers who each interpreted her work differently, especially during the 2016 election and the recent resurgence of interest in Tompkins’s work. From a painting perspective, I had questions about the materials used, about the treatment of surface, and content in relation to the history of painting. I had it all planned, the questions I would ask and what I thought we might talk about, but she revealed some compelling truths behind why she makes the work she does, which changed the course of our conversation.

From my first observations of the work I tell her that the paintings feel reminiscent of black and white photographs. But, the subjects of these “photographs” are displayed larger than normally comfortable for those who find the paintings disturbing. She does all of her work with airbrushes, which she tells me later is primarily because she developed tendonitis in both hands. “It is like painting with magic,” she explains. What I found “magical” was that she never actually touches the surfaces of her paintings.

It was a simple response; clear and not charged with jargon, either.

Our conversation turns to visibility; I notice Tompkins’s smaller works clearly depict the materiality of the paint, and her larger pieces feel visually like blurred photographs. I also talked to her about the proportions of the enlarged genitals within the frame (the rest of the body cropped out) and how they vary between the male and female anatomy.

JM: Are these proportions something you consider when making?

BT: “No, actually I don’t. I am just trying to make a very dynamic, beautiful and disturbing painting. I don’t think about how much male or female there should be, it’s just what gets me to a composition that I want to paint. ‘Cause before I paint it, I have to feel pretty convinced that I want to do it.”

JM: And where are your photographic references coming from?

BT: “Everywhere. It is ridiculously easy to find it – I never used a photograph as (originally) shot, I alter them quite a lot. I am not interested in someone else’s decisions about what makes an image exciting.”

Tompkins flips and rotates the images, makes color photographs black and white, substitutes body parts and changes genders of the figures. She has that control as the author.

JM: Why the reduction of color palette?

BT: “When I first started them, there was no color. Seriously, all color was black and white. The TV was black and white, the world was… it made sense. Really, they are in color ’cause I mix my own blacks. It makes the color more exciting.”

As a painter who has been encouraged to mix my own blacks since I started painting, I noticed the lovely shifts between warm and cool tones while looking at the paintings on view at PPOW.

The colors she uses sit in tubs for a while. Tompkins explains, “It was this really weird color. It looks black, but it’s not, it’s this brownish tone. I couldn’t duplicate it if I tried.” And it is not exact. “Green, yellow and magenta… How does it even become black?”

BT: “I wouldn’t let my students use black out of the tube when I taught, because I thought that it really makes a dead hole, visually, in the painting; even when you mix other colors with it, it is still dead.” She would send them to The Metropolitan Museum of Art, New York, ask them to walk around and come to paintings that have a fair amount of black in them to see what happens ocularly. “If your eye gets fuckin’ stuck on a dark area, that’s a tube black. And that’s how I found it out. I did it myself as an experiment. I found that really curious, because no one taught me that. Before, I had just never noticed. I had never heard of the concept of a chromatic black. I was doing a painting with acrylic, and I picked up ultramarine and burnt sienna… just some arbitrary colors, and then there was this black. I seemed to have been the only one in the world who had not been taught this color combination, but that’s how I came to it: by accident… You just do it, and that’s how you learn the most.”

JM: I read somewhere that there has been a surge of interest in your work that is centered around the political climate. It was either you or the writer who stated in this essay that one of the works’ goals is to reposition the women’s role and…

BT: “Oh not me. I would never say that; it was interpreted that way, though.

“It is their context. I make a big point about not interfering with other people’s contexts. Long ago, I made a decision when I got into the second phase of my career with this work (before, I was censored in Paris and my paintings were hidden for 40 years)… So, anyway,  in 2002 when I had the chance to show with Mitchell Algus (Gallery in NYC), it was the first time they (the ‘Fuck’ paintings) had been seen as a group. Ever. Anywhere. And that’s when I made this decision that I didn’t want to interfere with someone’s reaction or interpretation of the work by saying what I thought it might be about. It was a really conscious decision and it felt good to make because I was very uncomfortable when people asked me, ‘Why do you do this? What does it mean? What movement is this? What is its political agenda?’ And I gave myself a lecture, and said, ‘You’re smart. You can figure out the answers to this! You know, they are really just sound bites any ways.’ And now I think, ‘No, I really don’t wanna go there. I’m not gonna do it. Anything you say about my work is fine. Literally, fine.’ People have said some nasty things along the way and I am fine with it. Because for me, to not be fine with it, I have to interfere.”

“I once gave a lecture at Syracuse [University, where I attended undergrad] and there were some interesting questions in the Q&A as well as some real disagreements. I wanted to think these through. Some things happened that surprised me–there was a kind of hostility from a faculty wife that had to do with precise definitions of feminism, which didn’t interest me in the slightest, and I finally said to her that we are going to agree to disagree because I can’t engage with this anymore. On the train home I took out my phone and started taking notes to myself, to help me kind of structure what I thought about it and what I came up with in the end, after I went in big circles in my mind, was that I am not gonna engage in this. You know, any critic, any art writer, any dealer, any curator, any collector can say whatever they want and that’s fine because it adds to the conversation. The minute I open up my fuckin’ big mouth I am gonna limit that conversation. I was more interested in observing that conversation than in my contribution to it. So, when people say good things about my work I say, ‘Thank you!’ And often people say things that surprise me, coming from their own context, you know, whether it’s their sexual orientation or their political orientation or their art historical orientation… If someone says something terrible about the work I say,‘Thank you!’ because as the positive things are telling of the writer’s point of view, so are the negative things. They give the same effect from different sides. I hadn’t ever removed myself from the conversation and it isn’t typically something that artists do.”

Tompkins and I talk about critique for a while, and I tell her, There are so many artists that feel like they have to defend their work, and that is not how it should be.

BT: “There are all of these young artists, and they are very verbally adept; they can articulate the hell out of anything. Most of the time I have no idea what they are talking about. Paintings exist whether you are here explaining it or not… This is how we should teach the students, asking them how they keep themselves engaged in their studio practice with no outside stimulation or pressure, so they can go shake themselves up every once in awhile.”

Tompkins had told me that when she did teach she believed the best way to do so was through empathy. As she elaborates on these teaching stories, I began to see how empathy is an integral component of her artistic practice as she engages in making in her studio and fields the interactions with the work that come afterwards.

“Those paintings on paper in the back room (of PPOW), that’s a whole new idea!… There wasn’t a reasoned process, it was just me shoving myself around, and I thought, ‘Well, your risk of failure here is about 90 percent… Are you sure you wanna do it? Yeah I am sure, let’s work this out!”

She took her whole process and “blew it all up.” 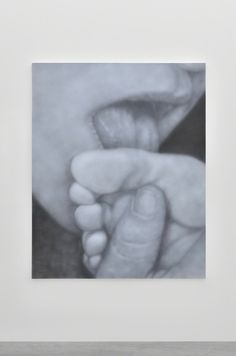 JM: That is the challenge and the goal; I think about that as well. How do I shake it up and take a risk?

BT: “You don’t have to defend your work, that is such bullshit! Anytime I ever tried I would just get so angry and upset and I didn’t want to feel like my head was blowing off!”

JM: Yeah, I get emotional.

BT: “Well, yes, of course! You know, it is a much easier position to take in life to not defend your work. If someone wants to say something about the work, I listen. Sometimes it is very interesting to me and sometimes it isn’t, but I am willing to listen to what everyone has to say… I did the work. They are either already convinced, or they are not. And if they are not, there is not a damn thing I can say that will move that process forward. So, I don’t. And my life has improved so much since I came to that conclusion.”

JM: Yeah, I feel like being a painter and thinking about all the times it has been declared dead, you living through that, and making work that is controversial to a large audience, I can see how it can become easy to feel like you have to conform to other ideas. But, when I saw the painting I just thought, ‘These are what they are.’

BT: “They are exactly what they are! Exactly!”