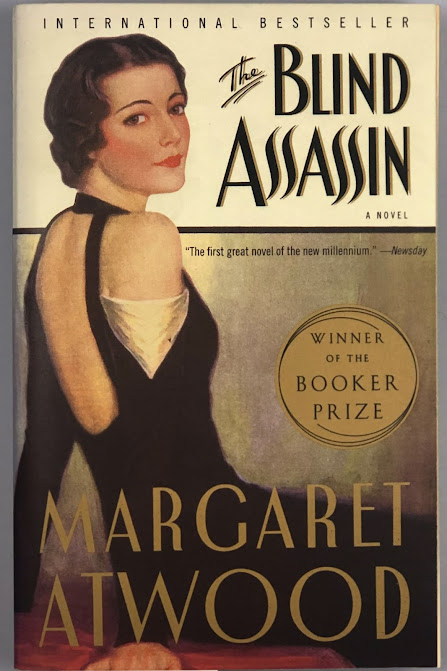 lenty of novels feature novelists, but few give even a line of the novels that the characters are supposed to have written. A recent example is Reta Winters, narrator of Carol Shields's Unless. Further back, there is Nicholas Jenkins, the narrator of Anthony Powell's roman-fleuve A Dance to the Music of Time. It is important to the plots of both these works that the protagonists have had success with their own novels. Yet these fictional fiction-makers are so much the alter egos of the actual novelists that, one imagines, they would hardly be able to write in a different way from Shields or Powell.
In contrast, The Blind Assassin provides specimens of a fictional novel. The Blind Assassin is not just the title of Atwood's book; it is also the title of a novel written by one of its characters. Atwood's narrator, Iris, has told us of her sister Laura's suicide in the book's opening chapter; soon we find out from an interpolated newspaper clipping that Laura "made her posthumous début as a novelist" two years later. Iris arranged the publication of the work of fiction that Laura apparently left behind at her death. Iris's account of her life with her sister is interleaved with extracts from this novel.
After the report of Laura's death, we are given the novel's opening under the heading "The Blind Assassin. By Laura Chase. Reingold, Jaynes & Moreau, New York, 1947". A woman intently examines a photograph of herself and a young man - "all she has left of him". Further extracts follow, without commentary or explanation, throughout the novel. They tell of the secret meetings between the two unnamed lovers. She is married, he is a political activist, perhaps on the run from the police. Like Iris's own narrative, it is set in the 1930s (he goes to fight in Spain, and is later killed in the second world war) and presumably in Canada, but it is stripped of almost all specific markers of time and place. The lovers meet, they make love (though this is never described), they tell each other stories, and then they part.
Why are we given this novel within a novel? Some of Atwood's own characters misconstrue its purposes. Iris's daughter, Aimee, radically misinterprets it to fit her own resentment. "She said it was obvious: her real mother was Laura, and her real father was that man, the one in The Blind Assassin". Without a father, and furious at her mother, Aimee reads to fulfil her angry fantasy. Near the end of Atwood's novel, Iris tells us that Laura's book caused "uproar" in her small town and that all the speculation about the "true" story behind the novel helped to ruin her husband, Richard. It emerged that he had had Laura confined in a "clinic" and had apparently driven her to kill herself. The novel was her indirect testimony and its success was her revenge on him.
Yet we are reading it too and, if we are shrewd, coming to different conclusions. Near her story's end, Iris tells us the truth about Laura's novel. "But you must have known that for some time." It should not spoil any surprise for a first-time reader to say that, by this stage, he or she should not be surprised by what is revealed. The clever thing is that the significance of the novel-within-a-novel has slowly become evident. Different readers will realise at different points. Fiction, we see, is taken from life, but not in the way that any reader within the novel realises.
So the novel-within-a-novel has an important narrative role. This is complicated by the story the lovers tell each other, which is an allegory of love's vicissitudes. Yet the snatches of the "novel" Atwood invents serve her purposes almost too well. All that gives them resonance is our growing understanding that they fictionalise a part of Iris's life about which she cannot tell us directly. It is difficult to imagine that these blank-toned episodes could make up the successful novel that the plot requires. They work beautifully, yet they are like no publishable novel.