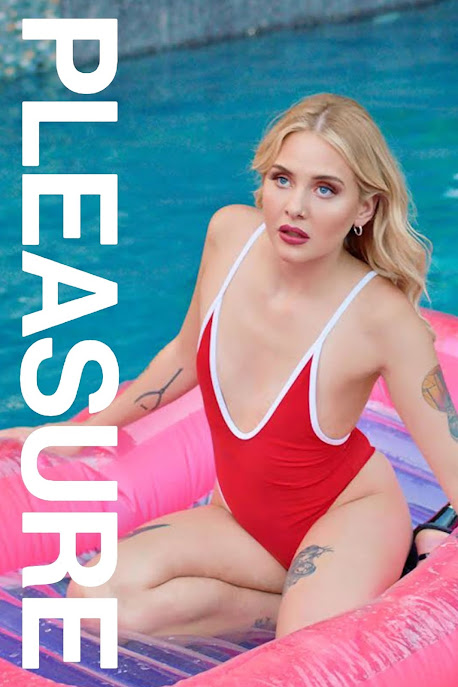 In Swedish film-maker Ninja Thyberg’s strong debut, a young woman discovers a difficult, male-dominated industry as she strives for agency

This sensibility toward labor, logistics – a healthy appreciation for earned knowledge and expertise, Thyberg’s keen eye for the small acts and details of “the business” – makes Pleasure a far more interesting, gripping and refreshing film than its subject matter might suggest. It’s an often subtle (even in its many XXX-rated shots) and surreptitious study of an industry built on explicit, aggressive imagery, an arresting film which, though it doesn’t stick the landing, thankfully delineates between the legitimate work of adult film performers and the toxicity, misogyny and abuse the male-dominated industry allows to fester and lacerate.

That’s in stark contrast to a subsequent shoot, this time by a male director, in which Bella is greeted and summarily subjected to “rough” material by two male actors, with no warning of the choreography (slapping, spitting, choking), no mention of safety words, and no expectation of anything except Bella accepting whatever she’s given (“Feels good to say yes, right?” the director tells her as he coerces her to continue the scene her panic interrupts). The violating scene is, under Thyberg’s direction, sickening, as the camera shifts from a consensual, mutual orifice – the locus of Bella’s gaze – to cover for abuse as performance. Pleasure, overall, takes a deft touch to the panoply of emotions and experiences industry women are wont to encounter at work. Trauma, unfortunately, is a prominent one, from harassment on set to the fetishization of so-called “interracial” porn (“it sounds racist because it is racist,” one of the black male performers tells Bella), which Bella participates in as a way to prove her mettle (it was a double penetration scene) and secure better representation, to the cloudy dissociative state Bella slips into during rougher shoots as both trauma response, coping method and sign of boundary snapping all in one.

But the main throughline is the work, neither condescended to nor dismissed here, as Thyberg eschewed more obvious plots a lesser director, or a male one, would probably pursue – Bella’s mom discovering her new vocation, for example, or a stock scene of some non-industry guy reacting poorly to her line of work, or relying on a straightforward, off-hours sexual assault instead for motivational trauma.

Kappel takes on a remarkably difficult role for her first feature, one that requires a double performance and the fine calibration of naive trepidation with undaunted ambition, and though there are moments of blankness where you’re not quite sure what Bella’s thinking – maybe, one wonders, she doesn’t yet know herself – the rookie is up to the task. So, too, are the numerous adult film actors who appear as themselves or take on lightly fictionalized version of their careers here, imbuing Pleasure with a striking, refreshing sense of realism; its locker-room talk, so to speak, of dressing up and playing the industry game are by far the film’s best moments.

Which makes the quietness of Pleasure’s ending land all the more disappointingly. There are strong themes in the open-ended, threads-hanging final scenes – that integrity arises from how one treats friends and co-workers, that success and ambition can erode (as it would in any industry), and most importantly how the toxic male view of exploitation and entitlement will corrode anything it touches, be it teammate bonds, a healthy sense of competition, or respect for oneself. It is a slippery sense of agency Thyberg can’t quite maintain a grip on, and the film slides into a provocative, if more muted than it should be, ending.