Euan Uglow / Perfectionist painter of nudes and explorer of perspective 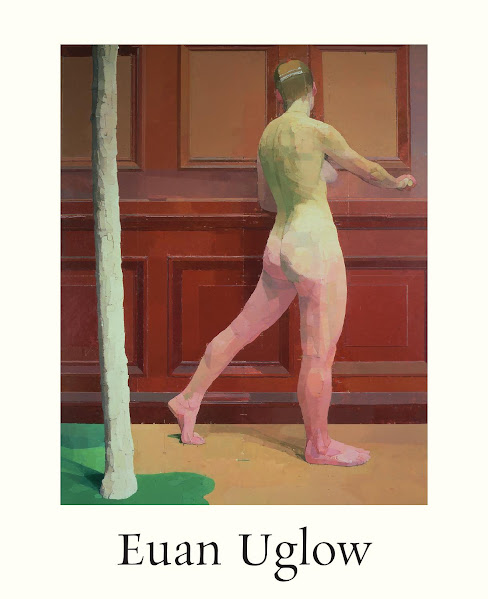 If the legacy of Euan Uglow, who has died aged 68, were imagined as a string of gems, the rarest would be his beautifully faceted paintings of silent nudes. Equally distinctive are those of solitary fruit or fragile flowers. Although greatly desired by individuals, they were undervalued by exhibition- and collection-making professionals, and are under-represented in museums. 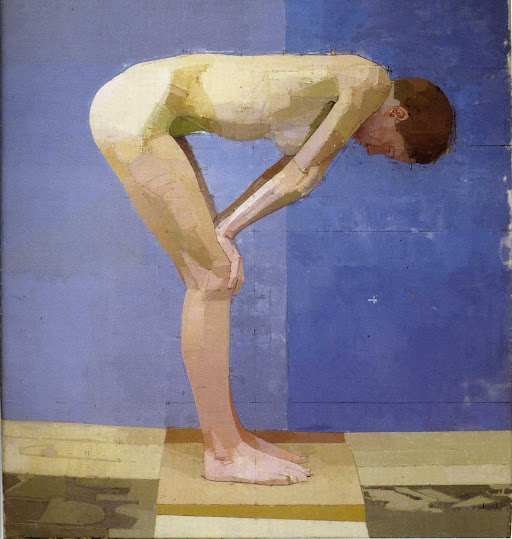 Uglow was "one of Britain's 15 most significant artists" for Lord Snowdon's group portraits in Vogue on the occasion of the Tate Modern opening. Misleadingly described as a figurative or realist painter, his contribution was actually as radical and experimental as any celebrated postwar artist. The ideas he pursued had nothing to do with language or the camera. Rather, his aim was "a structured painting full of controlled, and therefore potent, emotion".

Uglow's life centred on south London. After he moved to Turnchapel Mews, Battersea, in 1958 and adapted its upper floor to achieve the high grey London light favoured for its constancy, it was difficult for him to function anywhere else. His family house was in Norwood: his father was an accountant, and his mother expected her talented son never to let her down. 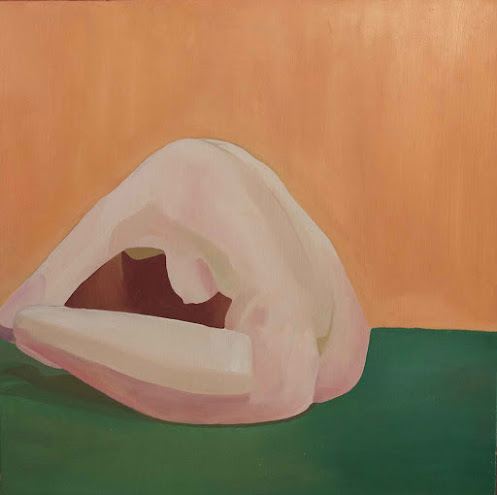 During the war he and his brother John were evacuated to a farm in Cornwall, where a childhood keenness for making things that function flourished as he watched a wheelwright and a two-man abattoir. He then spent the period 1954-56 on a farm and in building work as a conscientious objector. Indeed, his way of being creative through constructing things and observing organic growth and decay made his art continuous with his recreations. 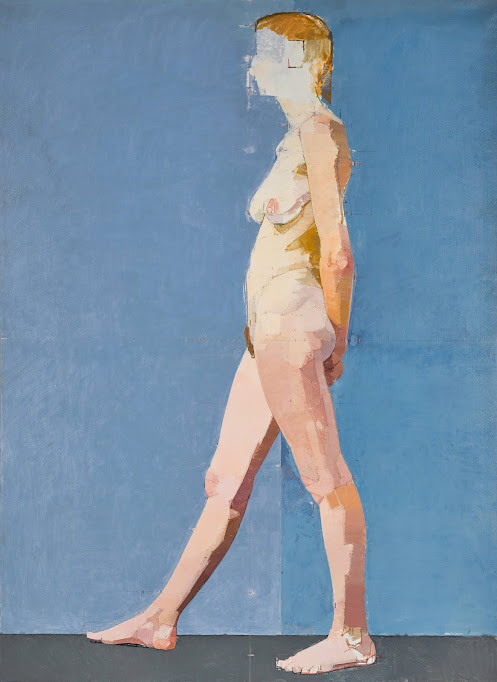 Uglow's enrolment in the junior class at Camberwell school of art in 1948 brought him into contact with the new professor, William Coldstream, who moved on to the Slade school of art the next year; Uglow himself began studying there in 1951. A number of talented students and young instructors reinforced a bias towards art that respected appearances and the formal nature of a picture as a flat rectangle. Unadorned subjects were set within highly artificial studio set-ups, the combinations of colour and form increasingly original. Pumpkin slices against blue and rose ochre were inspired by, for example, Lorenzetti's graceful, prowed boats. One of Uglow's favourite works, Rembrandt's Bathsheba, was admired for the impossibility of the pose and the way the navel "makes the whole stomach".

Some of Uglow's earliest paintings experiment with systems of representation. The arcadian scene, The Musicians (1953), is about perspective, while Nude, From Twelve Regular Vertical Positions From the Eye (1967) eliminates it. This formidable picture won the prestigious John Moores painting prize in 1972. 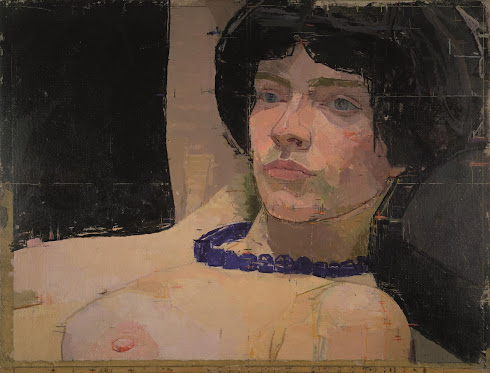 In his 20s, Uglow began a habit of travelling to see art, especially by artists of the early Italian Renaissance such as Masaccio and Piero della Francesca. These pilgrimages, the first by motorcycle and the last to see Grunewald's Crucifixion in Colmar, were occasions to enter the mind of the creator though the specific context of a place. Uglow accomplished such osmosis with painters to grow closer to the mind of the creator. However, as he said, he saw Poussin's composition on London streets - witness the 1988 picture of a girl chased by a man - and felt the tension of Cézanne in his own relationship to still-life. He found common ground in situations quite foreign - like admiring the self-discipline of artists he observed over a few weeks in a Chinese art school in 1987.

According to Uglow, no one could be too much of a perfectionist. He even made his own frames in order to achieve the right tone and extend the proportions, so that landscapes had deeper sides than top and bottom. Taking this perfectionism to heart, he practised a puritanical devotion to working in the studio and a scepticism about career self-promotion. Most of the shows were presented by his loyal dealer William Darby in the confined space of a Cork Street gallery, and one at Salander-O'Reilly in New York in 1993. 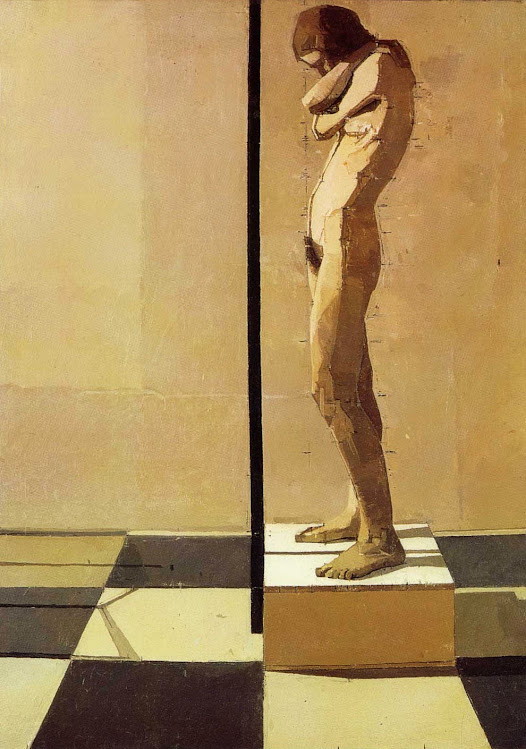 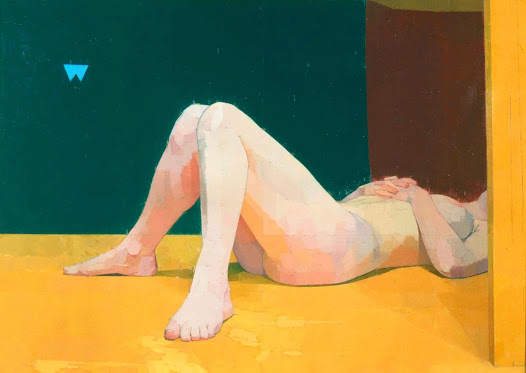 The first showing began a national tour at the Whitechapel Art Gallery in 1974. Highlights were the composite, torqued figure lying under the suspended heater in Three In One (1968) and a curled seated nude set against glowing blue in Summer Picture (1972).

By the next Whitechapel show in 1989, there were 32 nudes, including the Tate's standing Zagi (1983) and one study of a church in Cyprus. Both human and vegetable forms could be at once iconic and private - the inspiration sometimes revealed in their titles - diagonal, wave, propeller, pyramid and cuddle. As art critic David Sylvester remarked, reviewing Uglow's sensational show at Browse & Darby in 1997, where the small night studies were equally significant, the pictures are taut to the point of hurting the spectator and the harmonies and solutions to perceived perspective compare to the challenge Bach invented for himself in making fugues.

Some of the inventiveness and strain of pulling off paintings in progress for several years with living subjects was shared in London Weekend Television's South Bank Show documentary that traced the creation of Root Five Nude (1976). At the time, many art historians, influenced by vocal feminists, were accusing all painters using models of establishing a hierarchy of the beholder and, in conspiracy with the viewer, reducing the woman to a victim/object status. But dependency and support were mutual, and Uglow's models and students relished the relationship. His quietly stated observations about art and value set standards that haunt one's conscience.

Despite his natural authority, Uglow was frustrated in committee meetings and kept his distance from the Royal Academy or professorships. Briefly a trustee, he was anxious that the National Gallery should acquire, within its means, the best paintings, and was lately an advocate of the Cimabue Madonna staying in the nation.

Uglow took food and wine seriously, but his pleasures could be achieved in very simple situations, such as taking in the sunset on Clapham Common during an annual cricket match and picnic. An extended "family" ran to hundreds, since the offspring of friends joined their parents in nurturing the attachment. As with many artists, cohabitation was incompatible with concentration, and his marriage to Clare O'Brien in 1963 ended in divorce. 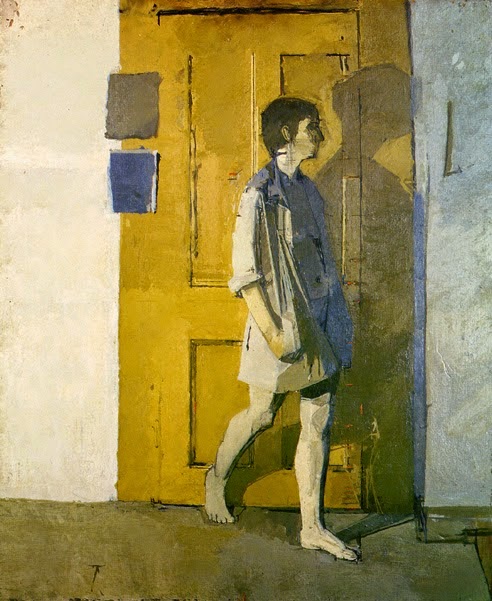 At Coldstream's memorial meeting in 1987, Uglow remarked that his friend was a lyrical artist whose late study of daisies against blue-patterned wallpaper showed that he painted "with the assurance and ruthlessness of a mature artist who did not care if it was 'right' as long as it was beautiful".

One of the first magical Uglows was called Beautiful Girl Lying Down (1959). Towards the end of his life, when he moved from the exploratory drawings of Nuria kneeling across the white upholstered bench in an enclosure by the front door of the studio to making a painting of the subject, he was finding an equivalent to heaven - each luminous stroke part of an erotic whole. This painting was shown in the National Gallery exhibition, Encounters - New Art From Old, and its affinity to a Monet landscape defined. The artistically demanding plane on which Uglow worked will contribute to the posthumous rise in his reputation.