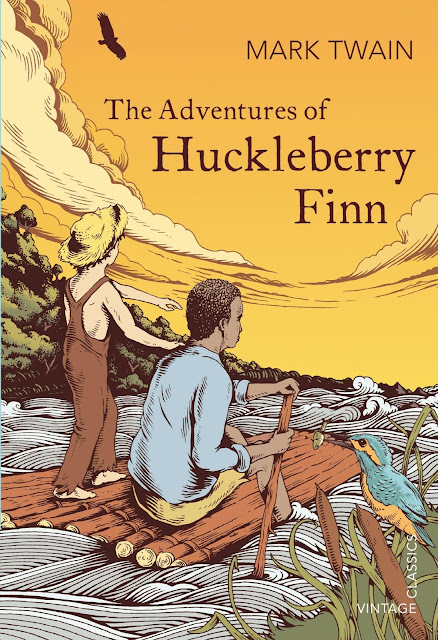 M
ark Twain began his masterpiece, he said, as "a kind of companion to Tom Sawyer". Drafted in the 1870s, the first chapters of the new book continued the old mood with the sharp ironic humour of its famous opening line: "You don't know about me, without you have read a book… made by Mr Mark Twain, and he told the truth, mainly."


But when, after a troubled hiatus, he returned to complete the manuscript in 1883, what had begun as a reminiscent celebration became a darker elegy for a lost world. His alter ego, Sam Clemens, was appalled by the trend of American life in the fading century. For Mark Twain, the surest bulwark against the sterilising tide of progress became his pen.
With Huck Finn, he could recall life on America's great river as a permanent thing, a place of menacing sunsets, starlit nights and strange dawns, of the confessions of dying men, hints of buried treasure, murderous family feuds, overheard shoptalk, the crazy braggadocio of travelling showmen, the distant thunder of the civil war, and two American exiles, Huck the orphan and Jim the runaway slave, floating down the immensity of the great Mississippi. Huck's is a journey that will transform both characters, but in the end, Huck, like his creator, breaks free from bourgeois inhibition, from those who would "adopt" and "sivilise" him. "I can't stand it," he says. "I been there before."
Another American from the midwest, TS Eliot, addressing Twain's genius, wrote that he was "one of those writers, of whom there are not a great many in any literature, who have discovered a new way of writing, valid not only for themselves but for others".
Hemingway put it more succinctly. "All modern literature comes from one book by Mark Twain called Huckleberry Finn… It's the best book we've had. All American writing comes from that. There was nothing before. There has been nothing as good since." 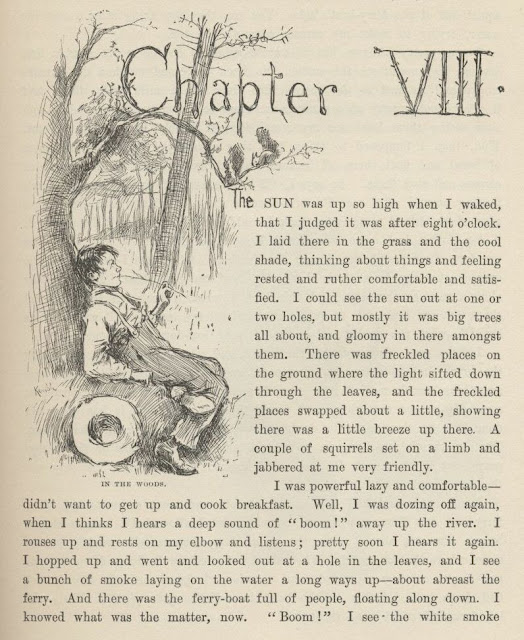 The voice of a new America resounds loud and clear from the first page to the last. Huckleberry Finn, inspired by a prequel (The Adventures of Tom Sawyer) that was for boys, is a book that celebrates the lost world of childhood, the space and mystery of the midwest. Above all, it mythologises the issue – race – that had tormented the Union for so many decades. So Huck Finn floats down the great river that flows through the heart of America, and on this adventure he is accompanied by the magnificent figure of Jim, a runaway slave, who is also making his bid for freedom.

The Adventures of Huckleberry Finn began as a manuscript originally entitled Huckleberry Finn's Autobiography. Twain eventually abandoned it following Huck Finn's development into adulthood. Twain wrote the bulk of the story in pen and ink between 1876 (the year of Tom Sawyer) and 1883. A later version became the first typewritten manuscript delivered to a printer. Ever since the publication of his story The Celebrated Jumping Frog of Calaveras County Twain was famous throughout the English-speaking world, and news of the book soon spread outside of the United States. The Adventures of Huckleberry Finn was eventually published by Chatto & Windus on 10 December 1884 in Canada and the United Kingdom, and then on 18 February 1885 in the United States by Charles L Webster and Co. (The American edition was delayed thanks to a last-minute change to an illustration plate.)
Even now, this great novel remains vulnerable to the censoring attentions of provincial reactionaries and classroom bigots, calling for the novel to be banned. In 2003 high school student Calista Phair and her grandmother, Beatrice Clark, in the state of Washington, proposed eliminating the book from the Renton school district, because of the frequent use of the word "nigger". In 2009 a Washington state high school teacher called for the removal of the novel from the school curriculum, stating that all "novels that use the 'N-word' repeatedly need to go". I'm happy to report that elsewhere in the world, Huckleberry Finn is still read, and taught, as an American classic.