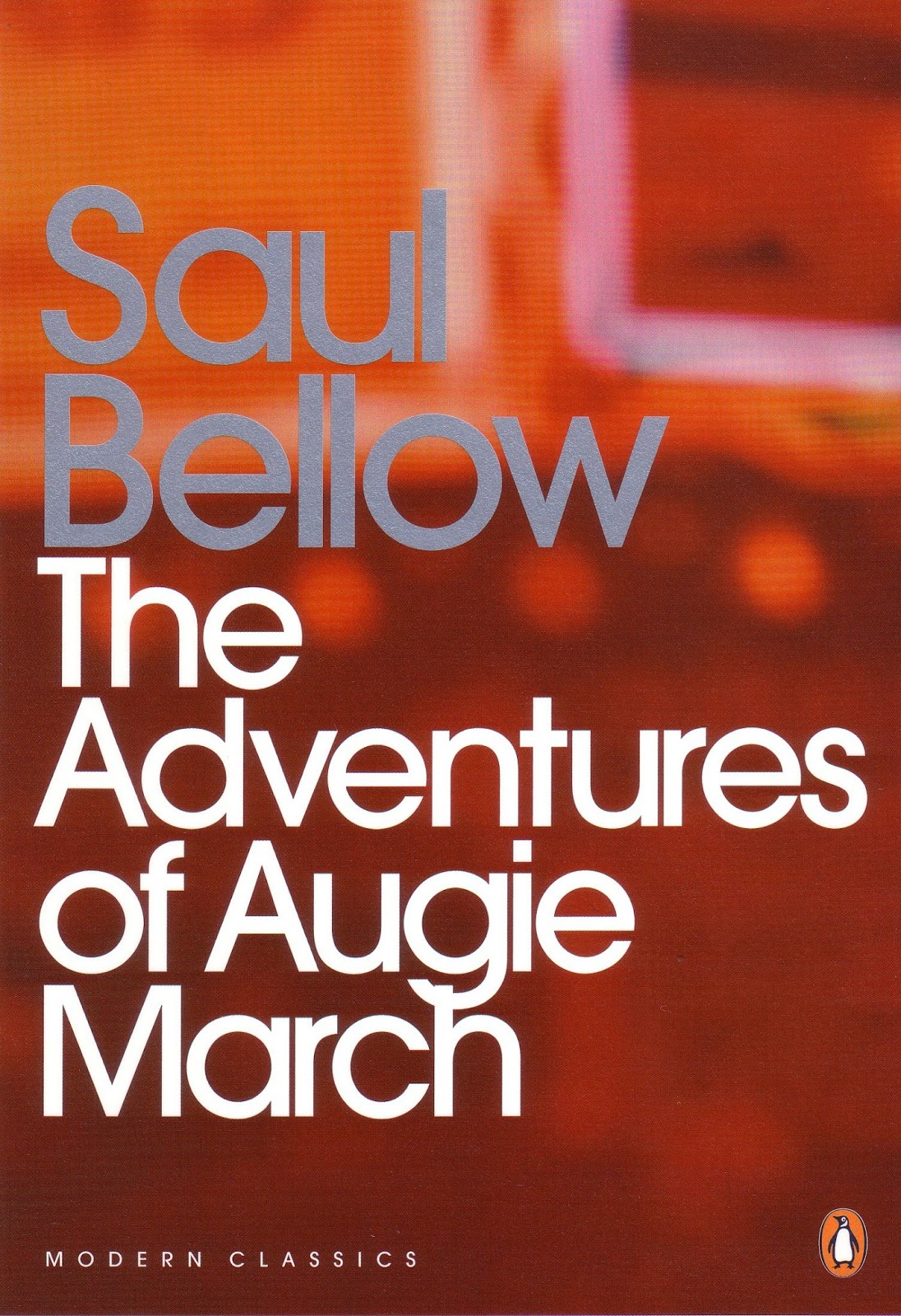 The Adventures of Augie March

rom the get-go – “I am an American, Chicago-born” – this turbo-charged masterpiece declares itself to be a heavyweight contender; and for some,The Adventures of Augie March is a knockout. Delmore Schwartz called it “a new kind of book”. Forget Huckleberry Finn (nodded at in the title); forget Gatsby; even forget Catcher in the Rye. This, says Martin Amis, one of many writers under Bellow’s spell, is “the Great American Novel. Search no further”. Well, maybe.
In retrospect, both JD Salinger (no 72 in this series) and Saul Bellow, who declared their originality at the beginning of the 1950s, stand head-and-shoulders above a rising generation of young contenders, from Norman Mailer and Gore Vidal to Kurt Vonnegut, and James Salter. No question: the great American postwar fiction boom starts here.
Augie March opens in 1920s Chicago during the Great Depression. Augie is “the by-blow of a travelling man”, and his adventures, loosely patterned after Bellow’s experience, are picaresque. This odyssey, in Bellow’s own words, traces “a widening spiral that begins in the parish, ghetto, slum and spreads into the greater world”, much as his own life did. Augie finds his feet through his engagement with a kind of America that had not been run to earth in fiction before. A sequence of brilliant set pieces narrates the footloose Augie’s upward drift. He becomes a butler, a shoe salesman, a paint-seller, a dog-groomer and a book thief, even a trades union shop steward.
He also revels, like Dickens, in some memorable characters – Augie’s Jewish mother; Einhorn, the fixer and surrogate father – and some seductive women: Sophie Geratis, Thea Fenchel (and her eagle, Caligula), and finally, Stella, whom Augie will marry. It’s a long book, some 500 pages. “It takes some of us a long time,” says Augie, “to find out what the price is of being in nature, and what the facts are about your tenure.” Quite so.
Augie enlists in the merchant marine during the second world war. When his ship, the Sam MacManus, is torpedoed, Augie experiences a long quasi-surreal episode on board a lifeboat in which he confronts matters of life and death in the company of Basteshaw, a weirdo. In the end, with persistent questions about identity and reality unresolved, Augie, the “travelling man”, declares himself to be “a sort of Columbus”, one who discovered a new world but who may himself be a flop. “Which,” as Bellow jokes in a brilliant closing line, “doesn’t prove there was no America”.

Saul Bellow published his first novel, Dangling Man in 1944, followed by The Victim (1947) – two works of fiction that reflect his marginal status as a Canadian Jew living in the US – but did not find his true voice as a novelist until he wroteThe Adventures of Augie March. Later, looking back, he recalled: “I was turned on like a fire hydrant in summer.” He had begun to write the novel in Paris, having won a Guggenheim fellowship. According to his first biographer, James Atlas, from whom he became estranged, Bellow found the spectacle of water flooding down a Parisian street to be the inspiration for the “cascade of prose” that gushed after his famous opening line: “I am an American, Chicago born – Chicago, that sombre city – and go at things as I have taught myself, free-style, and will make the record in my own way…”
He was, he said, revelling in “the relief of turning away from mandarin English and putting my own accents into the language. My earlier books had been straight and respectable. But in Augie March I wanted to invent a new sort of American sentence. Something like a fusion between colloquialism and elegance.” Philip Roth, who would sometimes struggle with Bellow’s influence, noted that this new style “combined literary complexity with conversational ease”. It was, like many literary innovations, from Mark Twain onwards, a high-low hybrid, and linked, in Roth’s words, “the idiom of the academy with the idiom of the streets (not all streets – certain streets)”.
The great, unfulfilled, hope of American fiction in the 1930s, Delmore Schwartz, put this explicitly: “For the first time in fiction America’s social mobility has been transformed into a spiritual energy which is not doomed to flight, renunciation, exile, denunciation, the agonised hyper-intelligence of Henry James, or the hysterical cheering of Walter Whitman.” Other critics, notably James Wood, have celebrated something equally universal – “the beauty of this writing, its music, its high lyricism, its firm but luxurious pleasure in language itself”.
The Adventures of Augie March encountered only one serious pre-publication critique (from Bellow’s British editor, John Lehmann, the celebrated founder ofPenguin New Writing). The upshot of this clash was Bellow’s determination to prevail. And he did. Augie March spoke directly to the new postwar generation, and would go on to influence writers as various as Cormac McCarthy, Martin Amis, Jonathan Safran Foer and Joseph Heller.
Bellow’s third novel was published by the Viking Press in 1953. In 1976 he was awarded the Nobel prize for literature, which identified this book as an important “novel and subtle analysis of our culture, of entertaining adventure, drastic and tragic episodes in quick succession interspersed with philosophic conversation, all developed by a commentator with a witty tongue and penetrating insight into the outer and inner complications that drive us to act, or prevent us from acting, and that can be called the dilemma of our age…”