The British soul singer Joss Stone is in a relationship with a family friend she grew up with, according to reports.

The 21-year-old from Devon is reported to be in a relationship with Danny Radford, 19, who works in the building trade.
Stone, who has sold over 10 million albums worldwide, has known him for most of her life but they only started their romance in the summer.
"Joss and Danny are definitely an item now. He's been staying with her at her home in Devon when she's home from Los Angeles, and they're inseparable" a friend told the Sun.
The friend added the two had grown close on a recent trip to Amsterdam.
"One of the reasons that they work so well is that Joss trusts him completely.
"She knew him before she was famous and he has been close to her family for years.
"Joss's mum loves him and trusts him not to hurt her."
Danny, who still lives with his parents - close to Joss's family home - is her first steady boyfriend since Beau Dozier, the music producer.
She met Beau Dozier when she was 17 and moved to live with him in LA. But they split up after 18 months.

Posted by Ficciones at Monday, December 29, 2008 No comments: 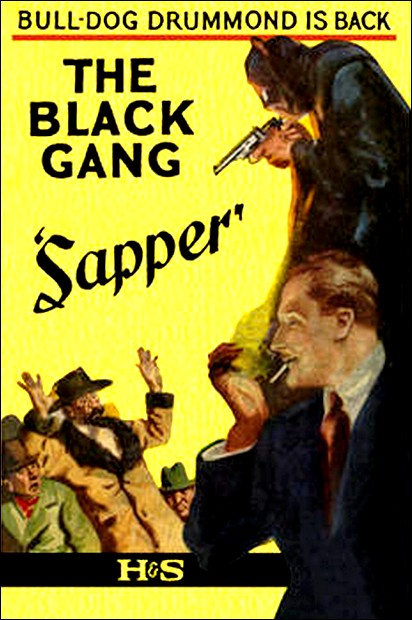 T
hey don't really do heroes like Bulldog Drummond any more. After a reverie about his days in the first world war strangling German soldiers behind enemy lines, we are told: "There are in England today quite a number of civilians who acknowledge only two rulers - the King and Hugh Drummond. And they would willingly die for either."


This is just as well, for in this, the first of the hugely successful series of novels (Herman Cyril McNeile adopted the pseudonym "Sapper" because serving officers could not publish under their own names), Bulldog Drummond comes up against as nasty a pair of villains as you could wish to meet, the chief of whom is hell-bent on bringing Britain, whose victorious army has just marched into Cologne, to her knees.

It is odd how books such as these begin with boredom. Carruthers in The Riddle of the Sands (1903) is half out of his mind with boredom; John Buchan's Hannay begins The Thirty-Nine Steps (1915) "pretty well disgusted with life"; the war has yet to begin. When it is over, Bulldog Drummond, "finding peace increasingly tedious", goes so far as to place an advertisement in a newspaper asking for diversion: "legal, if possible; but crime, if of a comparatively humorous description, no objection". Years later, James Bond - who Ian Fleming acknowledged was at least partly based on Drummond - would begin his career nauseated by the smell of a casino at three in the morning. This is because the works are, as a clever colleague of mine pointed out, all daydreams; and indeed one wonders what kind of mind it is that yearns for war as a diversion.
One particularly wonders about "Sapper". His work has been routinely condemned for its xenophobia and antisemitism. But while one should indeed condemn these attitudes, at least this novel is largely free of them (although you will search in vain for anything faintly resembling progressiveness). Antisemitism and other ugly prejudices were, to varying degrees, the order of the day (consider the line in The Thirty-Nine Steps about how "the Jew" now "has his knife in the Empire of the Tsar because his aunt was outraged and his father flogged in some one-horse location on the Volga").
But in this novel, at least, there is not too much to worry about. There is something Arcadian about Drummond. He has a rather familiar kind of innocence. His manservant, his ex-batman, serves him his morning beer loyally and "discreetly" leaves the room when he starts speculating about an encounter with a woman; and Drummond himself can begin a chapter with the line "I almost think, James, that I could toy with another kidney" (for breakfast). Does this remind you of anyone? Of course it does. What we have here is a PG Wodehouse story, almost; a Wodehouse story with master criminals (we also have murderous trained gorillas, acid baths, booby-traps and savages armed with poison darts hiding on the tops of wardrobes) - the kind of story, in fact, that Wodehouse's more impressionable heroes use to fire up their own imaginations. We even have gangs of loyal, tiddly young blades called Algy who call each other priceless asses, or some such.
Drummond himself is unflappable, unambiguously heroic, nonchalantly lighting cigarettes faster than he can smoke them (I could have sworn that at one point he had a pipe in his hand at the same time), making cheeky quips - many of them genuinely amusing - to the villains and getting the girl, despite the honest, ugly features which gave him his nickname. And the chief villain, of course, occasionally expresses regret that he will have to exterminate so worthy an opponent. ("You are meddling in affairs . . . of the danger of which you have no conception.")
So yes, it's an imperial fantasy - just the kind of thing Guardian readers should be shaking their heads and going tut-tut about. But, being Guardian readers, you will know that you are immune from the dangers of such fantasies, and can instead enjoy the work on its simplest, most straightforward level: as a rattling good yarn.

Posted by Ficciones at Saturday, December 06, 2008 No comments: