Recording through the night was a regular occurrence with the Rolling Stones in 1966. Tumbling out of the studio in the early hours was exhilarating and I thought it would be a great time to do a photo session for their next album, Between the Buttons, when they had that fantastic lived-in look.

Read more »
Posted by Ficciones at Thursday, February 22, 2007 No comments: 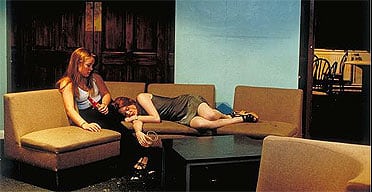 'It's meant to be quite a tender moment ...' Image courtesy of Maureen Paley, London

'We were in the middle of all this craziness, and I think that got into the picture'
Leo Benedictus
Thu 15 Feb 2007

The two girls were drama students at Middlesex University and the room was in their student union. Initially, it was going to be a picture of them on the dance floor, but it was just too crazy in there - you forget how much 19-year-olds drink at the height of the evening. So we moved upstairs to the chillout area, and when we got into the room I could see the picture immediately.
The idea was to show the supportive relationship between two friends at that age. I told the girls how to position themselves, and they fine-tuned it with their own ideas - things like holding the glass while falling asleep. I didn't compose the furniture, besides bringing that curved chair into the bottom. I certainly didn't move any of the cigarette butts or anything like that.
The girls were fantastic. They weren't actually drunk, but we were in the middle of all this Saturday-night craziness, with all the music coming through from downstairs, and I think that energy got absorbed by the picture. We all seemed to work spontaneously and intuitively together.
It's meant to be quite a tender moment, like when you think "I'll just sit here for a minute . . ." and you keep your eye on your friend because she's fallen asleep. It's not that you're necessarily out of it, it's just the excitement of having a really good night.
I took the photograph in 1997; it was really enjoyable to make, and it was the first picture that I really felt was my own. What is amazing is that when I look at it now, I realise that, at the time, I wasn't very far away from those girls and what they were doing.

Inspirations: "Lots. If you look at Helmut Newton's work, or Garry Winogrand's, or Philip-Lorca di Corcia's, you can see it's all about a universal language - everything seems balanced and right."

Pet hate: "X-ray machines in American airports. They say they can't damage films, but I have had that happen."

Posted by Ficciones at Thursday, February 15, 2007 No comments: 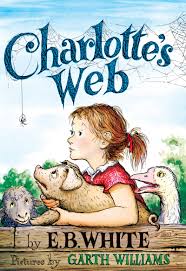 
It's hard to go wrong with a cute liddle piggy, and so it proves in this adaptation of EB White's barnyard classic, squarely aimed at alleviating half-term boredom. It maintains a good deal of charm as it exploits that by-now-familiar Babe technique of lip-synching live-action animals - though that weirdest of movie moppets, Dakota Fanning, injects a note of unutterable strangeness, playing all her scenes with a rictus grin that presumably is intended to make us think she's a sweetie-pie. It doesn't work. The usual array of topline talent fill out the voices of the assorted cows, sheep and poultry; but it's the unlikely presence of Steve Buscemi, as the garbage-wallowing rat Templeton, that proves the most inspired choice. It's not quite in Babe's league, but then very little is.

Posted by Ficciones at Friday, February 09, 2007 No comments:

'I just find her compelling. I love how she's bathed in white, with that innocence'


I met this woman, Maria, at a playground in Rome; I guess you might say I picked her up. We both had kids playing. She spoke some English, while I spoke a little Italian, and we hit it off. I convinced her that I had to film and photograph her for a project I was doing on new mothers, and in the end she gave way. She was really funny, because she didn't understand why I wanted to film her at all. She kept saying: "But why do you want me?"

I arrived the day before this picture was taken and spent some time with Maria and her family. The next morning she was still in her pyjamas, had given her daughter breakfast, and was starting to clean the house and make the bed. In this picture, I'm on the balcony, and she's just on the edge of the sunlight. It was just so serene, yet the moment was ironic, because she had a one-year-old running around, and the environment was the opposite of what you'd think.
I was using the first camera I ever owned, bought when I was 16. It's just a basic 35mm Pentax K1000, which they don't make any more. In the past, I've used all sorts of large-format cameras on tripods. But when I had my own daughter, I started using my Pentax again and taking portraits of her, being much more free, and I love it. It's so light and flexible.
A portrait like this is really all about the face and the expression, so a lot depends on the person - I just find her so compelling. I love how she's bathed in white, with that Madonna-like innocence, and yet there's a sort of frown; she's looking very serious and intense. That captured the contradiction I felt being a mother. You're not quite what you used to be, and there's also a certain darkness you have to embrace.
Maria hasn't seen the picture yet. I'll have to let her know so she can check it out, but I'm sure she'll hate it. She'll say: "I look terrible!"
THE GUARDIAN

Posted by Ficciones at Wednesday, February 07, 2007 No comments:


I write in the main room of our flat, at the top of a former Victorian asylum in Surrey. My desk was made in Norfolk in serviceable pine. It is arranged in layers, as a working model of my mind. The surface is dull, plain and tidy. The only ornament is a tiny, chipped pottery cat in a basket, which I hold sometimes if I am feeling bleak. In the upper drawers are half-used notebooks, fossils, crystals, seashore pebbles, a pack of tarot cards, my five-year diary, a steel measure, a stop watch and a last letter from a dead friend. The lower ones contain nothing but solid slabs of blank paper, and office wet-wipes which boast they "remove dirt and grime".
Insights don't usually arrive at my desk, but go into notebooks when I'm on the move. Or half-asleep. If I feel travel would broaden the mind, I take my laptop up a spiral staircase, to a little room under the asylum clock. Some preliminaries happen at the huge notice board in the kitchen, where I am building my new novel about Thomas Cromwell. It helps me structure a book if I can see what I'm doing. The chronological line and the flashbacks get worked out on postcards. As I narrow the focus, each postcard comes to represent a scene, and behind it I pin everything that belongs to it - tiny observations, descriptions, statistics, lines of dialogue. Then I can take it to the computer and work it through.
Some books are like singing, but this one is like fight arranging. It has to look natural but it's tightly controlled. I never stop thinking about it. All the world's a desk.

Posted by Ficciones at Friday, February 02, 2007 No comments: