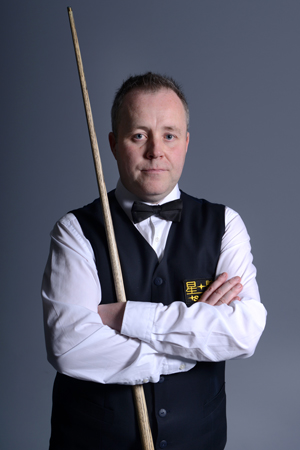 John Higgins was born in Wishaw, Scotland, in 1975. He got hooked on snooker as a youngster, turned professional in 1992, and became the first teenager to win three ranking events in a season. In 1998, he won the world title. Now ranked third in the world, he has won the first three titles of the 2001/02 season, and next week competes in the Regal Welsh tournament, Cardiff.
What is your idea of perfect happiness?
A happy family.
What is your greatest fear?
Dying.
With which historical figure do you most identify?
William Wallace.
Which living person do you most admire?
Nelson Mandela.
What is the trait you most deplore in yourself?
Laziness.
What is the trait you most deplore in others?
Arrogance.
What is your greatest extravagance?
Four-bedroom, detached house.
What objects do you always carry with you?
Wallet, credit cards, pictures of my wife Denise and baby Pierce.

Where would you like to live?
Wishaw, where I live now - I've never found anywhere better.
What makes you depressed?
Seeing people close to me unhappy.
What is your favourite smell?
Pierce's baby powder.
What is your favourite fantasy?
Living on a desert island with my family, with no worries.
For what cause would you die?
To save someone close to me.
Do you believe in monogamy?
Yes.
Which living person do you most despise?
Osama bin Laden.
Have you ever said 'I love you' and not meant it?
No.
Which words or phrases do you most overuse?
'You know what I mean?'
Advertisement
When and where were you happiest?
On my wedding day - December 22, 2000.
What would your motto be?
Don't worry, be happy.
What keeps you awake at night?
Nothing - Pierce sleeps through the night now.
How would you like to die?
Saving others.
Do you believe in life after death?
Yes.
How would you like to be remembered?
As a happy-go-lucky guy who loved his sport and his family.
What is the most important lesson life has taught you?
Always be nice to people - you never know when you may need their help.

Posted by Ficciones at Saturday, January 19, 2002 No comments: