Burlesque is not a style or a fashion statement. It's about striptease.
I always wanted to be someone. I had an Aunt Opal, who was very painted - green eye shadow, drawn-on beauty marks, flaming red hair. She smoked from a cigarette holder and swore like a sailor. Most people thought she was vulgar, but I wanted to be like her when I grew up.
I love the word stripper. It's a fabulous word. There's a lot of snobbery about burlesque. You hear it all the time: 'I'm not a stripper, what I do is different.'
Even when I did regular stripping, I was dressed vintage-style. I wasn't ever this tanned bikini babe swinging around a pole.

My martini-glass act is the one I've done more than any other. I've been performing it since 1993. I have about 15 other shows, but that's the one that always gets booked.
I'm more attracted to glamour than natural beauty. The young Marilyn Monroe was a pretty girl in a sea of pretty girls. Then she had her hair bleached, fake eyelashes, and that's when she became extraordinary. It's that idea of what you're not born with, you can create.
I'm used to corsets now. A 22in, even a 16in, I know how to stand, walk, sit, stay composed.
I've never had any inhibitions about being nude onstage. I will think about what the steps are, how my costume comes off, but never the nudity. It's never even crossed my mind. 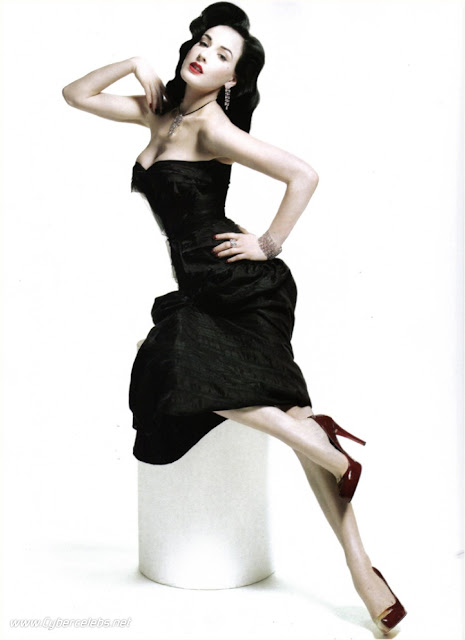 Men rarely say anything to me after a show. Maybe they're intimidated. It's usually the women who come up - a lot of them are inspired to bring elements of burlesque into their private lives.
People paint me out to be this person into exotic sex, which I am - I've said I'm into bondage and spanking. But I think a lot of people, if they were honest, would say, 'Yeah, that sounds fun.'
I like vanilla sex as much as the next girl. Sometimes when I date men, they feel they have to put on a show. I'm like: 'Stop trying so hard to impress me with your sexual perversions.'
People say, 'How can you be a feminist?' I would say, 'It's all about equal rights, isn't it?' And the second someone says you can't do what you love, do you have equal rights?
I've never been that girl out looking for a rich husband. I never wanted to have anyone say what I can or can't do. My soon-to-be-ex husband [rock star Marilyn Manson] asked me to quit my work so he could support me. I quickly realised that he wanted to change me. The things people like about you in the beginning end up being the things they don't like.
We were painted as this weird couple, because we had taxidermy in our home. But I've been to castles and there are all these hunting trophies and bear rugs.
We were so terribly in love. I never took him for someone who would exploit our divorce for the sake of records. I don't think people realise he used our marriage bed in that music video to have sex with that girl [Manson's new girlfriend Evan Rachel Wood]. And he wore his wedding ring. I just thought, 'Wow, this is kind of obsessive. I guess I still matter.'

I'd get married again. I'm not going to let one bad experience ruin it for the rest of my life.
I performed my show Liptease at the Cannes film festival. The room was full of big movie stars and producers. They'd never seen a girl take off all her clothes and ride a giant lipstick before. Sharon Stone came up to me afterwards to say how much she loved it.
I've had breast enlargement. It's so tiresome when people lie about their surgery.
Am I going to be frolicking about in my G-string in a champagne glass when I'm 60 years old? No. I'll be thinking about how to evolve accordingly.
· Dita is a spokeswoman for Viva Glam, the MAC range which supports men, women and children with HIV/Aids.

Email ThisBlogThis!Share to TwitterShare to FacebookShare to Pinterest
Labels: Barbara Ellen, Dita von Teese, Interviews, The Most Beautiful Women in the World, This much I know
Newer Posts Older Posts Home
Subscribe to: Posts (Atom)