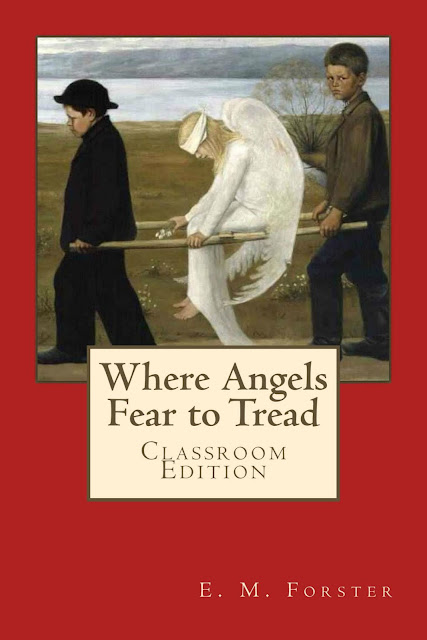 Where Angels Fear to Tread by EM Forster reviewed in the Guardian, August 30 1905

Where Angels Fear to Tread is not at all the kind of book that its title suggests. It is not mawkish or sentimental or commonplace. The motive of the story, the contest over the possession of a child between the parent who survives and the relatives of a parent who is dead, is familiar and ordinary enough, but the setting and treatment of this motive are almost startlingly original.
EM Forster writes in a persistent vein of cynicism which is apt to repel, but the cynicism is not deep-seated. It is a protest against the worship of conventionalities, and especially against the conventionalities of "refinement" and "respectability"; it takes the form of a sordid comedy culminating, unexpectedly and with a real dramatic force, in a grotesque tragedy.
There are half-a-dozen characters in the book which count, and two of them - Mrs. Herriton, the incarnation of spotless insincerity, and Harriet, purblind, heartless, and wholly bereft of the faculty of sympathy - are altogether repellent and hence not altogether real. The other four, whatever else they may be - and they are all more or less unpleasant - are undeniably and convincingly real. It is a trick of Fortune in her most freakish mood that brings about the union of Lilis, the vulgar, shallow Englishwoman, and Gino, the courteous, shallow, and discreditable Italian.
The results of the trick are at once fantastic and inevitable. The whole is a piece of comedy, as comedy is understood by George Meredith. We wonder whether EM Forster could be a little more charitable without losing in force and originality. An experiment might be worth trying.
THE GUARDIAN

Posted by Ficciones at Tuesday, August 13, 2002 No comments: