But that isn’t all she works in. In fact, Liu’s interest in art
began around 15 years-old and she has since dabbled
in various mediums including ink drawings, silkscreens,
paintings and collages. “Because we were an immigrant family
and I am first-generation, I always had this imbalance of belonging,”
Liu told Artsy in an interview. “I think at first it was the language barrier,
not speaking English, but then it started becoming about how I look.
I think that art helps evaluate some of the psychology of yourself
as a child, and to illuminate some things you may never have understood.”
We hold Liu’s characters close to our hearts, with iconic roles in
Charlie’s Angles, Kill Bill: Vol. 1, and Elementary. Yet her talent
has strangely gone unspoken about as her work has been
shown publicly and privately since 1993. 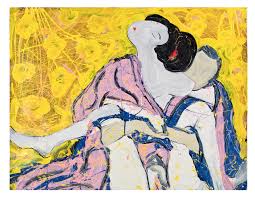 In January, Liu had her first museum exhibition titled
‘Unhomed Belongings’ at the National Museum of Singapore.
The exhibition examined racial identity as a first generation American.
Though it’s rare and quite costly to get your hands on one
of her pieces (we want 12 of them), Liu’s work is presently
breaking the internet bridging her notoriety beyond award-winning
actress and director, to acclaimed artist.