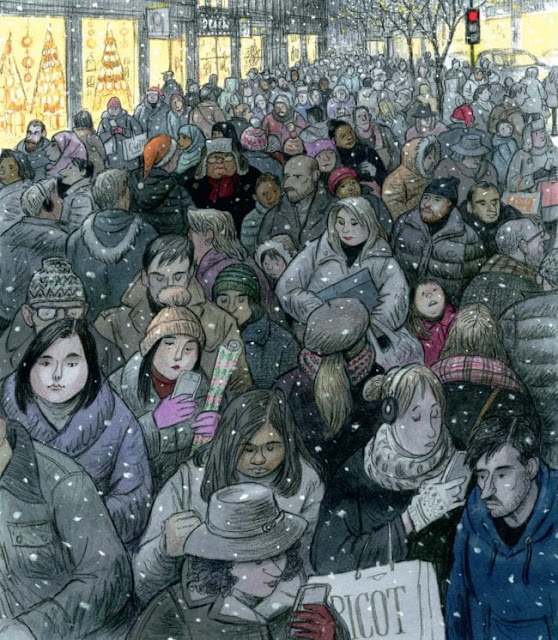 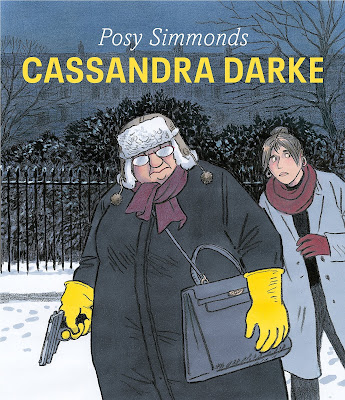 Cassandra Darke, the titular protagonist of Posy Simmonds’ latest comic, is the cartoonist's most heroic figure so far, the book an assertive step in the direction of more proactive social engagement, more upbeat than previous efforts but with the same cynical undercurrent. As in her previous long-form comics—Gemma Bovery was based on Flaubert’s Madame Bovary, Tamara Drewe on Thomas Hardy’s Far from the Madding Crowd—it wears its literary source material loosely if comfortably. Cassandra is a modern Scrooge, convinced of her own contentment in isolation, yet compelled beyond it.

Set in London, key points in the story appositely take place around Christmas of 2016 and 2017, between which Cassandra’s circumstances change considerably. She is the proverbial unlikely heroine: a portly 71-year-old art dealer running the business she co-founded with her ex-husband, who since married her stepsister and yet handed over the day-to-day to her due to the onset of Alzheimer’s. When we first meet her, she looks like the long-lost cousin of Grandma Giles, sheathed in a puffer coat and a low-set trapper hat. Roaming the holiday rush at Picadilly on a sugar high fueled by a box of macaroons from the Burlington Arcade, she is about to be outed as a fraud. 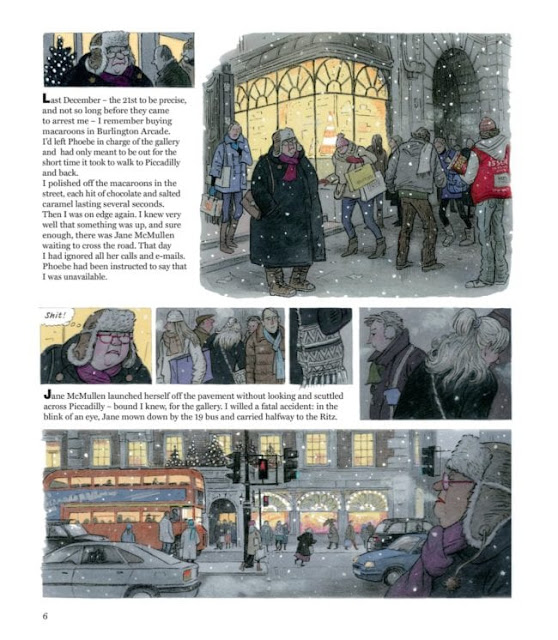 It turns out she has issued and sold unauthorized copies of a bronze sculpture by one of the artists she represents. According to her unreliable narration—Simmonds likes those—she did it to placate the market out of contempt for collectors who see only investment where she sees art. It seems clear, however, that the reason was mostly that she needed the cash in order to support her lavish lifestyle—her house in Brittany, her holidays in five-star hotels, her live-in housekeeper and her penchant for fine wine—in a field that for most smaller business owners are bringing diminishing returns these years, especially if they are unwilling to adapt.
And unwilling to adapt she is, even after her career comes to an end by the judge’s gavel: “My name was now officially MUD and always would be, and I didn’t much care. Any atonement, beyond the hours of community work, would be a waste of time.” We meet her again the following December as she returns from her husband’s wake to her £8 million Knightsbridge residence in fictive Osmington Square. The same place she once lived with her husband, now a rare holdout in a neighborhood of investment properties, empty at night but busy with improvement work by day: “There’s always scaffolding around here—people can’t stop extending up, digging down. Gyms, cinemas, panic rooms.”
So she is hardly penniless, despite her claims, but she has had to let go of most of her domestic staff and sell off her house in France and most of her art collection, and she has discovered fast food and cheap taxi services. She contemplates suicide by exposure in her now-grubby Japanese-style rock garden: “I haven’t ignored the downside of freezing to death: the shivering, the confusion as major organs pack up; the urge to hide in a confined space (“terminal burrowing” it’s called); the casting-off of clothes (“paradoxical undressing”. Which, for me, would be the worst aspect, being found naked on dirty gravel. Hardly Zen.)" Anyway, that’s when she discovers a gun and a mysterious pink glove left in a rubbish bin in the downstairs flat. 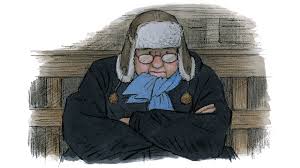 It is in this characterization of privileged life unsettled that Simmonds—ever concerned with the complexities of social relations and middle-class anxiety—delivers her starkest indictment to date of contemporary society. Mind you, with her trademark British understatement which ensures that satire never subverts story. Her masterful use of crayon and wash technique brings to life a posh London under snow, with its darkened windows, gated garden squares and gleaming lobbies. Her work was an exquisite, unostentatious a sense of place which rivals that of Jacques Tardi. And when Cassandra finally decides to take action and ventures into the ‘far east’ of London, Simmonds evokes a boarded-up high street—perhaps in Dagenham—of pound shops, off licenses and pawnbrokers in a short burst of dense panels, while contrapuntally noting in the voiceover “in spite of its decay, [it] has Christmas lights and bursts of laughter coming from pub doors.” In the space of a few pages she has skipped sideways from A Christmas Carol to A Tale of Two Cities.
But we left things hanging about that gun. It is surely connected to Cassandra’s Christmas ghost, her stepdaughter Nicki—an art school student dabbling in feminist performance and burlesque dancing, who lodged in her downstairs quarters for the better part of the year. Although unimpressed with her artistic aspirations, Cassandra figured she could use an unpaid assistant and offered her respite from her mother’s (Cassandra’s stepsister’s) smothering presence. Unsurprisingly things eventually went sour between them. 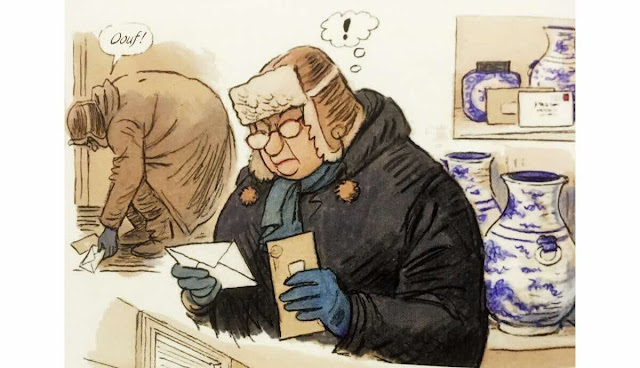 Sadly, Nicki remains rather bland as a character, a little too much of a naïf fully to receive this reader’s interest or sympathy, but she is the perfect foil for Cassandra, unwittingly exposing her hypocrisy through her own presumption, and youthfully anarchic in a way that slowly upends her host’s comfortable and self-sufficient existence. But—entirely unsurprising to anyone familiar with Simmonds eschewal of sentimentality—not in the life-affirming way that sentence might lead one to expect. Nicki begins bringing over Billy, her working-class boyfriend, for whose put-on posh accent Cassandra falls, “a sort of upper-class lizard who came around to fornicate” as she describes him. Anyway, our heroine starts receiving dick picks and death threats on her phone, and before you know it, well, there is the gun and the glove.
The mystery that ensues is unraveled entertainingly through shifts in perspective, with Billy coming to play a key role. Simmonds’ trademark blend of text and image, with various levels of narration and different voices woven through pages often dense with typeset text, conveys the complexity of human relations that underlie it, and without ever feeling anything less than a compelling, breezy read. She remains the exception to the rule that prose and comics do not mix, possibly because of her experience in newspaper and magazine cartooning. Her long-form books—all serially pre-published to some extent in the left-leaning London newspaper The Guardian—follow the logic of one-panel cartoons: succinct and condensed in their enunciation, vitally dependent on precision in word and image, but unfolded into narratives of human consequence. 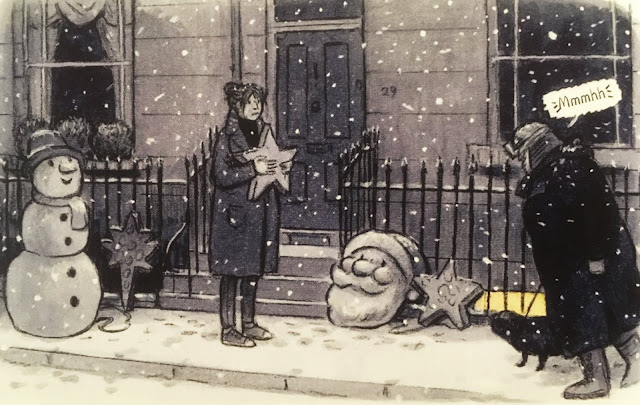 And yes, as in Simmonds’ Gemma Bovery (serialized and collected 1999) and Tamara Drewe (2005-6, collected 2007), there is a death at the center of Cassandra Darke—a murder to be specific. It is foregrounded by a newspaper clipping dropped unto the very first page, priming the reader for what is ultimately a heartbreakingly sordid tale, emblematic of a society—and indeed a continent—in moral and economic dissolution. And in case you were wondering, Brexit does receives a reference, although it is so elegantly subtle that one might miss it, which just goes to show how confident Simmonds is in her story.
In the lineage of faulty middle-class heroines, from Mrs. Weber and Trish Wright in her classic late 1970s/early 1980s comic strip series in The Guardian, through the fatal ennui of Gemma and the trio of unlikely allies in Tamara Drewe, Cassandra is—as stated at the outset here—surely the most heroic, almost to a degree where it feels like a new direction for Simmonds. Cassandra is heroic in part because of choices she makes in the story, although that aspect of her heroism is largely futile and is secondary to the heroism of her flawed individualism as a woman who has chosen not to conform to expectations—loneliness, sexual frustration, eventual social ostracism and suicidal thoughts be damned. And she receives a happy end delivered with such glorious cynicism that it almost—almost—becomes affirming.