The Eye
Created by Marc Behm 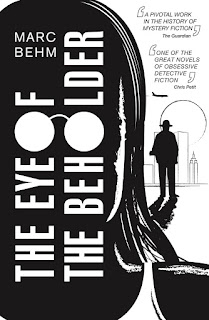 An unnamed private detective, known only as "THE EYE" is the hero of one of those peculiar books written in the genre but not 'of' the genre, if you see what I mean. Hired to tail a young man, The Eye witnesses the murder of the young man by his new wife on their honeymoon, and is soon obsessed with her. His obsession seems to know no bounds, and as the novel unwinds, The Eye follows his prey around the world over a span of several years, as she works her way through a string of husbands, and the body count climbs.

As Behm says, in the introduction to the Black Box Edition of Behm's three novels, "It's the story of God in disguise as a Private Eye, searching for his daughter: a quest for grace."

Fair enough, I thought (although this does raise the possibility of some Hotel Dick spotting a weird looking guy sitting in the lobby reading a paper with two eye holes in it and asking someone like Marlowe, à la The Maltese Falcon,"Who's the punk?" to which Marlowe replys "It's just God, on a job" ).

Anyway, amongst many other things, it does raise the question of The Eye as an 'eye' (ie just what is it we actually 'see' when we see something) - as in "you don't see things the way they are but the way you are." Or, to put it another way, just how do men see women in this hardboiled genre. If questions like this don't concern you, then don't worry, because I suspect you'll enjoy the book anyway despite it being the longest tailing job ever written.

An edgy, unsettling novel which seems to evoke strong reaction among any who've read it, it's one of those books you either love or hate. Newgate Callendar in The New York Times Book Review called it "One of the most remarkable combinations of a private-eye novel and psychological suspense story, with an entirely new slant, that has ever been published," and critics in France have hailed Behn as a major new writer. In fact, it was filmed in 1983 , in French, as Mortelle Randonnèe, directed by Claude Miller, and starring Isabelle Adjani. Ironic, since the book started out as a film script for Philip Yordan, but when that project fell through, it became a novel. In many ways it still reads like a 'book of the film'. Still there are plenty of laughs in there as well. A new film version, this time in English, featuring Ewan McGregor (Trainspotting, etc) as The Eye, filmed in my hometown, with Montreal substituting for a dozen cities around the world, and directed with tons of style by Stephan Elliot (The Adventures of Priscilla, Queen of the Desert) was released in January 2000. Although it's been getting mixed reviews, it certainly is an impressive-looking bit of film.

But then, there always has been a film-like quality to the novel--after all, Marc Behm was a scriptwriter before he turned to writing fiction, working on the classic 1960s flicks Charade (starring Cary Grant and Audrey Hepburn) and Help! (featuring--who else?--the Beatles). Behm currently lives as an expatriate writer in France, and continues to produce distinctive crime-related novels that--unfortunately--remain unpublished in the U.S. In fact, Eye of the Beholder was out-of-print for many years until it was finally reprinted as a tie-in with the new film.

On a final point, Behm said, in response to the critical acclaim that followed the book and labelled him the new Hammett etc, "I've read my share of contemporary thriller writers and I still find that Graham Greene is the master of us all. I find Chandler rather boring and Hammett, although nice to read, belonged to a school of writing I find tiresome."
Sacrilege!