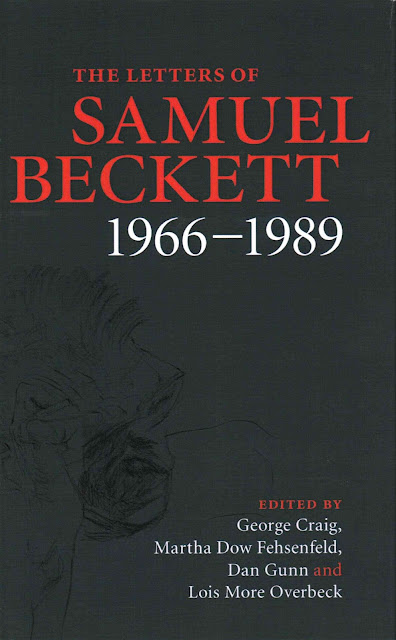 
‘Saw Harold who showed me The Birthday Party. Suggested a couple of places where the pauses could be longer’

Thank you for your letter. I know little about Strindberg’s plays and do not think I have been influenced by them.
Eh Joe went well in London. Siân Phillips adequate. Relatively pleased with the result. Please not Cusack. The National Theatre wants to put on All That Fall with Olivier and Plowright. It has to be no there too.

Saw Harold who showed me The Birthday Party. Suggested a couple of places where the pauses could be longer.
Still standing, though stooped. Surprised myself by waking up.
End of mother very distressing. We buried her somewhere. Glad I came though doubt I shall return to Ireland again.
So sorry to hear that you have died. It won’t be long before I fall over the abyss and join you.
Declined Harvard. Couldn’t face it.
Declined Oxford. Couldn’t face it.
Been coughing my guts up and have abscess on my lung. The doctor insists that smoking will kill me. I’m waiting. I’m still waiting.
I regret I must decline your interview request as I have nothing to say.
Have finally written a breath play. Curtain. 1. Faint line shines on pile of rubbish on stage for five seconds. 2. Faint brief cry and immediate inhalation for 10 seconds while light increases. 3. Exhalation and diminishing light for 10 seconds. 4. Silence for 87 minutes. Curtain.
I read La Nausée once but it was not in my thinking when I wrote Watt.
Please accept my apologies for not having replied sooner. Please convey my thanks to the Nobel committee and inform them that I will not be able to attend the ceremony in Stockholm as I am on holiday in Tunisia. Please also ask them to send the cheque to someone else.
Up and down here. Some of my friends are still alive and some of them aren’t. When last I checked I was still breathing shallowly.
I regret I must decline your interview request as I have nothing to say.

Have returned from Berlin where I have been rehearsing Godot. P&L insist on coming on stage from the wrong side. The tree has too many leaves on it.
Thank you for your invitation to Mexico. I am sorry I have replied so late that the premiere has now already taken place.
Have tried to translate Molloy. Can’t make head or tail of it.
Just finished Not I. Can’t make head nor tail of that either.
I regret I must decline your interview request as I have nothing to say.
Glad you are still keeping going. It’s all over for me. Thank you for the book which I can’t read as my sight is now too poor. The doctor suggests I wear glasses. Charlatan.

I have been trying to write a short play. Nothing so far.

Thank you for your letter. If there is any affinity between Queneau’s work and mine it is entirely coincidental.
I am sorry to hear you are dying. If it’s any consolation I am too. I am sorry I have nothing to offer you by way of a play. Not even a discredited unpublished work. My time is up.
I have written one last play. S = silence. V = Voice. S. Faintly audible. V. No. S. Slightly more audible. V. No. S. Slightly more audible still. V. No. Curtain.
I regret I must decline your interview request as I have nothing to say.
I fell over. Managed to get up. Just. I’m sorry I can’t help with your problems. I suspect you, like me, prefer them to be insoluble.
Pen to paper is a long howl these days. Even the simplest words. I am dying. No really. I am this time. It is the Endgame. I am dead.
Affectionately, Sam
Digested read, digested: Sam’s Last Tape.
THE GUARDIAN