Pulp science-fiction? How Quentin Tarantino could save Star Trek

Pulp science-fiction? How Quentin Tarantino could save Star Trek

The tepid recent instalment left Kirk and co needing direction, dialogue and a decent baddie. Luckily Hollywood’s grandmaster of profanity has one more film to make

I
f you were to draw up a shortlist of likely directors for the next Star Trek movie, auteurish cinephile, renowned grump and all-round cuss-enthusiast Quentin Tarantino would probably not be on it. And yet we may be plotting a course towards exactly that. QT has pitched a Trek idea to producer JJ Abrams, who is so impressed that he’s going to assemble a writers’ room to hammer it out. Tarantino could feasibly direct.


Yes, it sounds like spinning-bowtie, box-of-frogs madness: a cray-cray cross-pollination of eye-watering obscenity and Prime Directive piousness. But imagine Tarantino boldly going where no one has gone before. It could crash and burn like the USS Vengeance. Or – and try to seriously picture it for a second – it could be utterly fantastic.

It’s definitely the right time for the franchise to offer up a WTF like this. The last movie, Star Trek Beyond, felt like a film that didn’t quite quite know what to do with itself. It was the third in the rehatched series but not a trilogy-closing culmination. It felt like a placeholder, an extended big-budget TV episode that left its characters much in the same way it had found them. There were no real stakes, no sense of finality.

With a new Star Wars movie seemingly every six weeks, Abrams contracted for Episode IX and a Trek TV series currently sating Trekkies’ appetites, clamour for big-screen Enterprise outings has waned. Put simply, Trek needs a sharp kick up the backside. And it’s hard to think of a more steel-toecapped wallop in the fundament than one administered by Tarantino.
It’s not as weird a fit as it sounds, either. Tarantino has shown he’s got the action chops a tentpole like this requires. Both of Kill Bill’s volumes are stuffed with some of the finest and most creative duff-em-up sequences of the last two decades, while Django Unchained and Inglourious Basterds were no slouches when called on for action. He’s never done squillion-dollar CGI spectacle, but neither had Taika Waititi until he made Thor: Ragnarok. It seems to be something you can learn. Tarantino might have to tone down the claret-drenched ultraviolence a tad to ensure that all-important 12A rating, but he could probably manage that if he tried really, really hard.
It’s not action competence that makes Tarantino such an intriguing Trek proposition, though. Previous Treks each had a fine actor as the primary antagonists – Eric Bana, Idris Elba, Bendleworth Crumbleflatch – but none will go down as an all-time great baddies. Something was missing: for all they menaced, there was little actual menace. 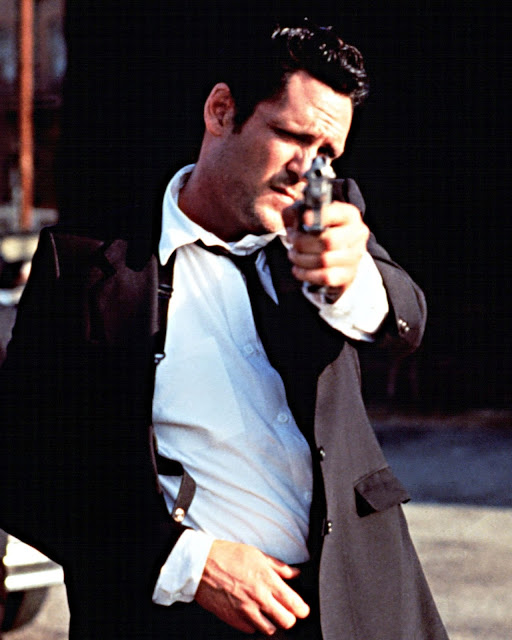 
Tarantino is the man who made the lovely Christoph Waltz a beast of clammy nightmares; who turned Michael Madsen into a Pavlovian trigger for the flopsweats; who, in Django Unchained, imbued Leo DiCaprio with so much malice people now cheer when he freezes to death in Titanic. A 12A certificate is no barrier to this: look at Heath Ledger’s Joker. Star Trek needs a good, three-dimensional baddie. Tarantino can deliver in spades.
More importantly, though, Trek is an examination of friendship, shining most vibrantly when Kirk, Spock and Bones are bickering and riffing off each other. This is where Tarantino makes the most sense. Even if he doesn’t write all the dialogue himself, you know any chat-heavy sequences will be snappy, bouncy and assuredly naturalistic. New Trek has strived for this before, and has achieved it on occasion. Tarantino would knock it out of the park.
He can do action. He can do shocks. He can do dialogue. He can do suspense. He could provide a shot of adrenaline to the heart of this directionless franchise. It’ll probably never happen. This is likely all Hollywood hearsay and fanboy what-ifery. The odds of a studio giving Tarantino final edit of an action epic, or the chances of him agreeing to do the movie without it, are slim indeed. But … maybe. Just maybe.
If the sharp-chinned one sticks to his word to retire after 10 movies, this, after the Manson murders movie he’s currently got in development, would make his Trek the final film of his career. What a typically unexpected, Tarantino-esque way to go out.
THE GUARDIAN

Posted by Ficciones at Thursday, December 07, 2017