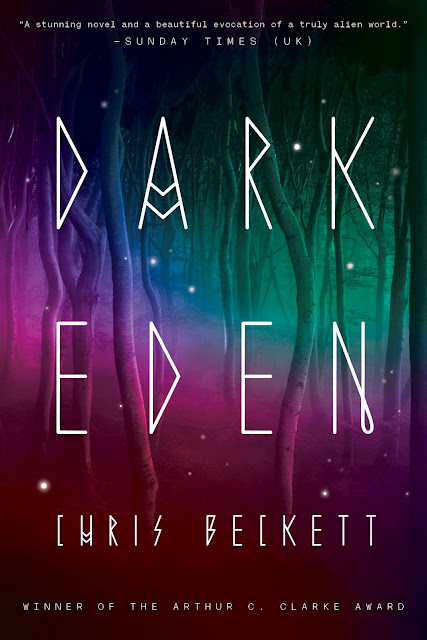 In a hostile world, an isolated family struggles with blinding night

It's not just dark on Eden. It's "dark dark", sometimes "dark dark dark". Night is permanent on this hostile, beautiful planet, where the only light comes from the flora and fauna. One small valley contains the only human inhabitants, the 500-odd incestuous descendants of two astronauts, abandoned there 163 years previously.
I recently chose Chris Beckett's Dark Eden as my science-fiction book of the year, but it's probably also one of my books of the year, at least if you judge by the number of people I've forced it on. I just love it, so I'm delighted that Sarah Crown chose "darkness" as her theme this Christmas, as it means I can go on about it a little more. 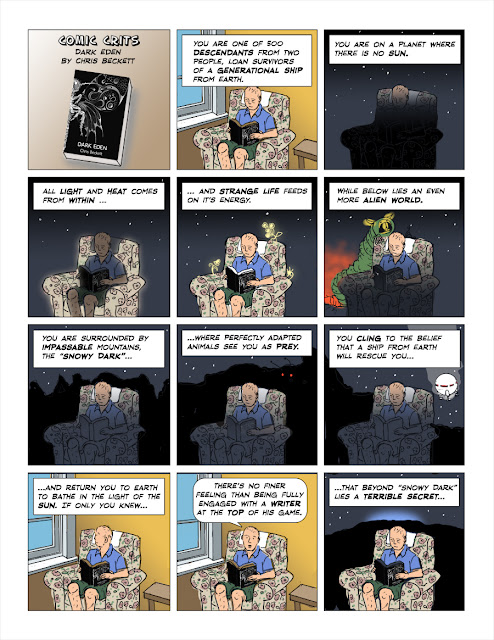 With elements of Riddley Walker, Dark Eden is narrated in the strange lingo that has developed among the "family" which now inhabits Eden, the sometimes stunted, deformed family trying to survive until Earth sends help.
A Landing Veekle, "one of those sky-boats with lights on them … brought Tommy and Angela and the Three Companions down to Eden from the starship Defiant", runs their mythology. Tommy and Angela stayed in Eden and made four daughters and one son. Harry "slipped" with his sisters, and now there are many. They recite their history every AnyVirsry, but it's starting to mutate. "Jesus was the leader of the Juice," they say, and he was "spike[d] up to burn" by Hitler. Anyway, the young ones – some batfaced, some clawfooted, thanks to inbreeding – are starting to forget it all. They don't believe it matters any more. "You should say years … you should say 15 years, not 20 wombtimes. You know what Oldest say: The world doesn't come from a woman's belly."

And the food in their valley, hunted and stripped of its shining alien vegetation for more than a hundred years, is starting to run out. When murder comes to Eden for the first time, one young man, John Redlantern, decides to set out across Snowy Dark to find out if there is anything else out there.

The image of his little crew, babies and all, walking out into the pitch, primeval Dark of this planet with only a few lights between them has stayed with me ever since I read Dark Eden in January. It's freezing. They don't know what's on the other side. Terrifying beasts are hunting in the black. "This was where he'd led us," says John's cousin Gerry. "The rest of us bunched up in a circle, in a place so dark that it was the same as being completely blind, waiting for that leopard to strike and kill again. It was dark dark dark. But out in that darkness that made us blind, near near, with nothing between us and it, was an animal that wasn't blind at all, and could run silently over the surface of the snow."
It's not that Beckett describes the darkness at length, in great swooping passages of beautiful prose; he doesn't. His story is all told in the first person, narrated by different characters in their addictively odd vernacular. But that makes it all the more evocative, I think, and I'm shivering just writing about it. Thank goodness, then, that Beckett has just signed a deal to write a sequel, Gela's Ring, out in 2014. It's a long time to wait, but this is a world I'm desperate to return to.
THE GUARDIAN

Posted by Ficciones at Wednesday, December 06, 2017