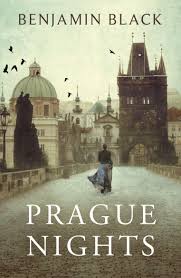 
Perhaps it is to warn those hoping for another in his Dublin-set Quirke series that Benjamin Black’s latest novel is firmly entitled Prague Nights (in the US the book will have the more evocative title Wolf on a String). Over the last 10 years the seven Quirke books have established Black as a master of high-class crime fiction, literary noir in the tradition of Georges Simenon and Raymond Chandler.
The new novel, however, forsakes 1950s Dublin and Black’s misanthropic pathologist in favour of 16th-century Prague and the court of the rapacious, paranoid and all-powerful Holy Roman Emperor, Rudolf II. An unexpected shift, except that Benjamin Black is, of course, the pen name of the Man Booker prize-winning John Banville, who set much of his 1981 novel Kepler, a re-imagining of the life of Rudolf’s imperial mathematician and astronomer, in the same time and place. Banville has also written about the city in Prague Pictures, a chronicle of his own experiences of the Czech capital interwoven with fragments of history, literature and folklore. Prague, perhaps almost as much as Dublin, is in Black and Banville’s DNA.
As crime fiction tradition demands, Prague Nights opens with a dead body. It is the winter of 1599 and Christian Stern, the ambitious bastard son of the prince regent of Regensburg, is newly arrived in the city, intent on currying favour with the imperial high-ups and securing a place “among the scores of learned men who laboured at His Majesty’s pleasure, and under his direction, in the fabulous hothouse that was Hradčany Castle”. Instead, drunk and disoriented, he stumbles upon the corpse of a beautiful young woman in the snow, her throat savagely slit. After staggering to a castle guard for help, Stern discovers that she is Magdalena Kroll, daughter of Rudolf’s physician and the emperor’s latest “little plaything”. Stern is promptly apprehended as a suspect and imprisoned.
This is, despite all appearances, an astonishing piece of good luck. The paranoid, occult-obsessed emperor has dreamed that a star will come from the west, sent by Christ himself, “a great good omen to the throne and … a token of victory over the Turk”; thanks to his auspicious name, Stern seems to be this star. Sprung from jail and abruptly elevated to the imperial inner circle, he is given the responsibility of investigating Magdalena’s murder.
The problem is that Stern proves a lousy detective. His predicament only worsens when another body is found. He knows no one in Prague and the emperor’s advisers are determined to exploit him for their own ends. Despite his claims to prodigious intelligence, Stern is both careless and naive. Dazzled by his new status and helpless in the face of his own impulses, he ricochets through Prague in a state of almost permanent intoxication, drunk not only on the plentiful liquor but on sex, novelty and, most of all, fear. He may have no idea who killed Kroll but he knows only too well the fate of those who displease the emperor.
A conventional whodunit would be fatally undone by so feckless a protagonist, but Prague Nights is not a conventional whodunit. Early in the novel, Stern meets with Rudolf’s chamberlain in a room dominated by a tapestry of Actaeon, the hunter who in Greek mythology was turned into a stag by a wrathful Artemis and killed by his own hunting dogs. Stern fails to take the warning, but the stage is set. As the sophisticated and ruthless masters of court diplomacy move him like a chess piece from square to square to achieve their own ends, it is not the mystery of the two murders but the creeping sense of the net tightening around Stern himself that drives the narrative, slowly revealing a power struggle that threatens to undermine the emperor.
The plot is rather slapdash, but the marvellously evoked “city of masks and make-believe” is the great pleasure of Prague Nights. In an author’s note, Black describes the book as a historical fantasy and, in characteristically gorgeous prose, he conjures a wintry world of opportunists and occultists, dwarves and hunchbacks, wolves and shadowy black-winged beasts. With its “windows like eye sockets”, even the house where Stern stays resembles “a hollowed-out death’s head”.
This novel seems to narrow the gap between Banville and Black, a sense underscored by the appearance of Jeppe Schenkel, the fictional dwarf from Banville’s Kepler. The many fans of Black’s hard-boiled noir will be hoping that this is a playful nod from the writer Banville calls his “dark brother” and not an indication that one of the most successful literary bifurcations of recent years is coming to a close.
• Clare Clark’s We That Are Left is published by Vintage. Prague Nights is published by Viking.