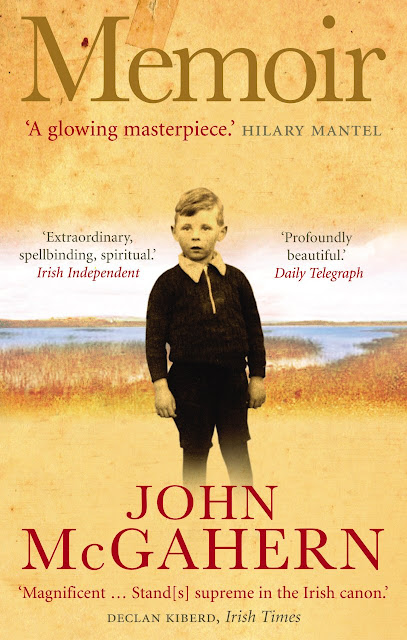 A family touched with madness

'One thing you find out while writing a memoir,' says John McGahern, 'is what an uncertain place the mind is.' I am sitting in the half-dark of a Soho bar listening to Ireland's greatest living writer of fiction describe some of the unexpected difficulties he underwent while writing his first factual book. His soft voice and carefully wrought sentences echo the cadences and craft of his prose so much so that it is as easy to be mesmerised by his spoken words as his written ones.

'There is not the same freedom in the memoir as there is in the novel,' he continues. 'Fiction needs to be imagined. Even events that actually happened have to be reimagined. With a memoir you can't imagine or reinvent anything,' he says, sighing, as if this runs counter to all he believes in. 'You have always to stick to the facts.'
McGahern's memoir is called simply Memoir, and it sticks always to the cold, bare facts of his young and troubled life. It has been a long time coming, and, as it unfolds, you can see how the events recalled in it impacted on his fictions, shaped him as a supreme chronicler of human experience. Now 70, and with six acclaimed novels and four short-story collections behind him, McGahern has created a work of personal testimony that brims with remembered detail, and possesses an emotional intensity that, in places, is almost overwhelming.
Memoir is ostensibly about his childhood in the small rural Irish community which he left as a young man, but has since returned to, and settled in. The landscape - small unkempt fields, still lakes, lanes bordered by hedges of ash, blackthorn and sycamore - will be familiar to readers of his fiction, mapped out initially in The Barracks, his first novel from 1963, and delineated in all is subtle, shifting ordinariness in his last novel, That They May Face the Rising Sun (2002). The shadows that stalked those stories are here made flesh, and, at times, one wonders how McGahern survived to tell the tale.
The biggest, most foreboding presence in the book is his late father, a policeman, who was a bully and a pedant. The narrative is punctuated by scenes of often random brutality, retold in a matter-of-fact, almost detached, manner that makes them all the more disturbing. In one scene, McGahern describes his father beating one of his sisters senseless with a spade, but there is none of the judgmentalism or wallowing in victimhood that tends to characterise the contemporary survivor's memoir.
'I never felt a victim,' he says, calmly. 'To be a victim is a failure of intelligence. One becomes responsible for one's own life, however difficult that life may be.' He closes his eyes, as if trying to catch a thought that is hovering on the edge of his consciousness, then says something that sheds fresh light on all his writing. 'No matter what happens to you, no matter how depressing the material, if it becomes depressing to write, or indeed, to read, it's no good. I firmly believe that unless the thing is understood it's useless, and that the understanding of it is a kind of joy. It's liberating.'

In the three years since its publication, McGahern's last novel, That They May Face the Rising Sun, has taken on a life of its own, becoming that rare thing, a formally experimental work of literature that is also a global best-seller. 'In Ireland,' he says, proudly, 'some people have read it who don't read books. Which is surprising given that, in the strict sense of the word, it is an anti-novel.' In America, too, it has become a best-seller by word-of-mouth following a spate of reviews comparing McGahern to Chekhov, Balzac, and even Beckett. The New York Times called him 'the most accomplished novelist of his generation'. Having just reread it, I tell him that I am intrigued by the spell it weaves, given that it is a novel that seems to have no discernible plot, and in which nothing really happens, and yet, as one reads on, a whole world emerges, familiar and new.
'Well, it's a deliberate attempt to deal with a whole society,' he says, sipping on his mineral water, and looking both flattered and uncomfortable at my praise. 'One of the problems a writer always has with material is how to dramatise it. In a way, I thought that the act of taking drama out of it, if it was consciously done, could be dramatic in itself. My whole idea was to take plot and everything else out of the novel and see what was left.'
How, then, did he structure the narrative? 'Oh, the day, the seasons, the community. The rhythms of the everyday. In a way, nothing happens, and everything happens. You have to follow your own life. That's what I wanted to do, anyway.'
He writes for two or three hours a day, with 'a lot of time looking out the window in between'. Each book, at least until the memoir, seems to have taken longer than the last. There was a 12-year gap between Amongst Women and That They May Face the Rising Sun. 'That was the longest,' he says, 'but it began like all the rest with certain images entering my head and refusing to go away until I wrote them down. Sometimes, I've spent three months writing them down only for them to come to nothing, to disappear into the page. There have been times when I have not written anything for two or three years. I think,' he says laughing, 'I was exhausted by all that staring out the window.'
Could he imagine a life without writing? He closes his eyes and thinks about this for a long moment. 'In a way, yes. Certainly, I wouldn't write if I didn't need to. One of the unexpected pleasures of writing is that it makes anything else seem attractive. You'd almost do anything to avoid it. It would be easier, too, to go on writing different versions of the same book, but that wouldn't do for me. I think,' he says, finally, getting to the very heart of his greatness, 'that you need to always raise the fences.'
A rough guide to John McGahern
· Born 12 November 1934, Dublin.
· Attends the Presentation Brothers College in Carrick-on-Shannon, then St Patrick's Teacher Training College, Dublin.
· Works as a primary schoolteacher from 1955 to 1966.
· Marries Annikki Laksi, a Finnish theatre director, in 1965. They divorce soon after. He later says: 'It was hopeless. I wouldn't live in Finland and she wouldn't live in Ireland.'
· In 1973, marries Madeline Green, an American photographer. They live in Co Leitrim.
· His first novel, The Barracks, is published in 1963. It's followed by The Dark (1965), which causes a furore when it is banned in Ireland for being 'pornographic'.
· Goes on to write The Leavetaking (1975), The Pornographer (1979), Amongst Women (1990) and That They May Face the Rising Sun (2002).
· Amongst Women is shortlisted for the Booker Prize in 1990, and wins the Irish Times/Aer Lingus fiction prize the same year.