Lily King on Margaret Mead, the Inspiration for Her Novel Euphoria

Lily King on Margaret Mead, the Inspiration for Her Novel Euphoria

We spoke to Lily King about Margaret Mead, the inspiration behind King’s acclaimed new novel, Euphoria. 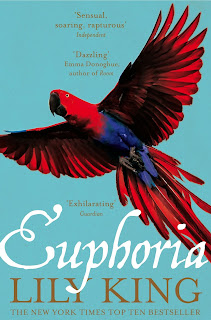 In the June issue of Vogue, I wrote about **Lily King’**s compass-spinningly seductive fourth novel, Euphoria (Atlantic Monthly Press), inspired by Margaret Mead’s experiences in 1930s Papua New Guinea. The novel’s protagonist, Nell, whose brilliant, controversial book on sexuality and Samoan children has made her famous, is adrift and mourning a miscarriage when the book opens. She and her loose-cannon husband, Fen, are looking for a new subject of study when they happen upon a colleague and competitor—an affable Brit who reignites Nell’s intellectual curiosity and shares her haunted sense of loss. Joining forces, the trio encounters a river tribe with thrillingly unconventional gender roles; needless to say, it doesn’t take long for their delicate balance to be upset. King’s stunning feat of historical ventriloquism deviates from Mead’s story in several key aspects (to see how, you’ll have to read for yourself), but the novel’s version of the love triangle culminates in its own inevitable-feeling—and devastatingly romantic—outcome. From Norman Rush to Barbara Kingsolver, the misdeeds of Westerners have inspired their own vibrant literary subgenre; in King’s fresh addition, the work of novelist and anthropologist find resonant parallel: While immersing ourselves in the beauty and cruelty of others, we confront our own. I corresponded with King about Mead—and what continues to draw fiction writers to the intellectual hothouses of yesteryear.

What attracted you to Margaret Mead in the first place, and why did you decide to write about her relationships with Reo Fortune and Gregory Bateson?

I accidentally found myself reading a biography of Mead about nine years ago. I got to this part when she was working in Papua New Guinea with her second husband, Reo Fortune, and they met Bateson and the three of them had this crazy love triangle for five months, and of course I thought that would make a great novel. I never really believed I’d be the one to attempt it. But I wanted to know more about this time in her life, so I read her memoir and her book, Sex and Temperament in Three Primitive Societies, about the tribes she studied during that time. I found myself taking notes and getting ideas, and when I was done with my last novel, Father of the Rain, I started in.

Each of the three anthropologists has different approaches to their work and the limitations of it: Nell is a meticulous and empathetic observer; Fen, who is talented with languages, is obsessed with breaking down barriers; and Bankson humbly questions whether one culture can, with any objectivity, understand the values that govern another. How would you compare the work of an anthropologist with that of a novelist?

I think they are almost the same thing. Both a novelist and an anthropologist ask the same thing: How do people live? Mead said in a New Yorker interview: “The whole world is my field.” A writer would say the exact same thing.

Marriage, of course, has its own culture and temperament—the unspoken understandings and shared history between two people. Mead is a towering figure, and it’s fascinating to see a more vulnerable side to her. Were there any surprises in your research? Do you have a favorite Margaret Mead quote?

There are so many great Mead quotes, but here’s a surprising one. It’s something she wrote to Fortune after their work in New Guinea was done and she was on a boat home to America without him. “I wish you hadn’t hit me where it would show that night over there. I wouldn’t have had to go away from you.” This line suggests that if he had hit her someplace where people couldn’t see it, she would have stayed. Our image of Mead is a tough, outspoken middle-aged activist, but she was once a young woman far from home who was, on more than one occasion, knocked around by her husband.

At one point, Bankson resonantly asks: “When only one person is the expert on a particular people, do we learn more about the people or the anthropologist when we read the analysis?” What made you decide to tell the story from his perspective—apart from the first chapter, and Nell’s journals and letters?

Once I wrote that second chapter in Bankson’s voice, I knew it was his story, not hers. It just felt more natural, more intimate. I could get so much closer to him, to his core. And once I realized it was his story, everything I thought was going to happen had to change.

What are you working on now?

I have exactly 1.5 pages of a new novel. It’s going to require a mountain of research. It feels like something impossible, just as Euphoria felt, which I’m hoping is a good thing.