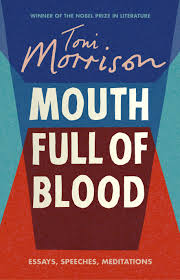 The Nobel prize winner reveals how she would rewrite Beloved, and argues that ‘canon building is empire building’, in this collection of essays and speeches

Awriter’s life and work are not a gift to mankind; they are its necessity,” says Toni Morrison in “Peril”, the brief, remarkable introduction to her newest book. In this collection by the Nobel prize winning author – widely, ardently considered to be one of the world’s best writers – there are 40 years of her essays, speeches and meditations, including her thoughts and arguments about politics, art and writing. The book contains exhortations and transcribed question-and-answer sessions, reflections and analyses, exegeses and commencement talks. In other words, it’s a large, rich, heterogeneous book, and hallelujah.
Organised into three parts titled “The Foreigner’s Home”, “Black Matter(s)”, and “God’s Language”, each section begins with a moving address to the dead: respectively, to those who died on September 11, Martin Luther King and James Baldwin. “The Foreigner’s Home” is centred on politics, particularly on questions of otherness, foreignness, citizenship and nationalism. Of who, especially in the US, gets to belong. Morrison makes plain that racism, tribalism and bigotry are nothing new – are, in fact, inherent to the broken foundation on which the nation was formed.For instance, in “Moral Inhabitants”, she runs through a harrowing list of the things “our conquerors (our forefathers), our men of vision and power in America” have said about marginalised people. Morrison quotes Theodore Roosevelt on Native people, Ulysses S Grant on Jewish immigrants, the New York Tribune on Chinese people, Benjamin Franklin on black people, and on and on, ending with a deeply sickening diary selection from William Byrd, the founder of Richmond, Virginia, in which he catalogues who whipped and brutalised which of his slaves.
That history is terrible; the present is, of course, hardly wonderful. Reviewing the history of genocide, she posits that “nation-states, governments seeking legitimacy and identity, seem able and determined to shape themselves by the destruction of a collective ‘other’”, and that “for an assumed safety, hegemony, or pure land grabs, foreigners were constructed as the sum total of the putative nation’s ills”. This is from a lecture given at Oberlin College, Ohio, in 2009, but until I checked the index, I thought it might be from 2019. “Porous borders are understood in some quarters to be areas of threat and certain chaos, and whether real or imagined, enforced separation is posited as the solution,” she says. “It may be that the most defining characteristic of our times is that, again, walls and weapons feature as prominently now as they once did in medieval times.”
With this book, one is tempted to quote at length from her words: her acuity and moral clarity are dazzling, but so is her vision for how we might find our way towards a less unjust, less hateful future. Race bias, she notes, “is not absolute, inevitable, or immutable”. What’s more, “it has a beginning, a life, a history in scholarship, and it can have an end.”
Morrison believes in the power of language to move us towards this more desirable end, and one of the keenest pleasures of this book, especially for the many admirers of her fiction, will be the detailed explications of her own writing. There’s a fascinating explanation of revisions she made to the last sentence of her great 1987 novel, Beloved. In the printed version, the novel ends with the phrase “Certainly no clamor for a kiss”, and Morrison tells us there had been a different, more vernacular and “racially resonant” word than kiss, one that her editor found to be “too dramatic, too theatrical”.
With this unspecified word, she wanted to carve from American English “its accretions of deceit, blindness, ignorance, paralysis, and sheer malevolence so that certain kinds of perceptions were not only available but were inevitable”. After much thinking, she changed the word to “kiss”, a decision she now regrets: “The trouble it takes to find just one word and know that it is that note and no other that would do is an extraordinary battle. To have found it and lost it is in retrospect infuriating.”
Could one word matter so much? Maybe, she says, especially if “the writing of it tries for racial specificity and figurative coherence” (and this reader cheers, agreeing). The lasting regret has caused Morrison to “rethink the subtle yet pervasive attachments we may all have to the architecture of race”. Next, she repudiates the first pages of her novel Sula, which she begins with what she calls a “safe, welcoming lobby” to bring readers past the threshold of her book into a “black-topic text”. She wants, she says, to identify “the strategies one can be forced to resort to in trying to accommodate the mere fact of writing about, for, and out of black culture while accommodating and responding to mainstream ‘white’ culture”.

But then she turns her attention to the first, unforgettable lines of Beloved: “124 was spiteful. Full of a baby’s venom.” “No native informant here,” Morrison notes, and she thrillingly, at length, explains the thinking that went into making these opening sentences abrupt. These are such important questions for writers, for readers and for everyone else: who’s considered to be the audience?'

“Canon building is empire building,” Morrison says, words that should be sent to every professor who includes only white writers on a syllabus, to every all-white literary prize list. “Canon defense is national defense. Canon debate … is the clash of cultures.” In a eulogy to James Baldwin, she thanks him: “It was you who gave us the courage to appropriate an alien, hostile, all-white geography because you had discovered that ‘this world [meaning history] is white no longer, and it will never be white again.’”

Morrison passes along some of that courage, in this book as in all her books. These are difficult and alarming times, with hatred and fascism making front-page news day after day: “It really is not a good time to write,” she concedes. But then again, she says, it never has been a good time to write. “As writers, what we do is remember. And to remember this world is to create it.”
It’s a world Morrison has played a vital, original, farsighted role in creating. Mouth Full of Blood is a bracing reminder of what words do, how carefully they should and can be used. Here is one of Morrison’s many magnificent, rigorously argued calls to bravery: “Our past is bleak. Our future dim. But I am not reasonable. A reasonable man adjusts to his environment. An unreasonable man does not. All progress, therefore, depends on the unreasonable man. I prefer not to adjust to my environment. I refuse the prison of ‘I’ and choose the open spaces of ‘we’.”
RO Kwon’s The Incendaries is published by Virago. Mouth Full of Blood is published by Chatto (£20).
THE GUARDIAN