The Kingdom by Emmanuel Carrère review / The man who invented Jesus 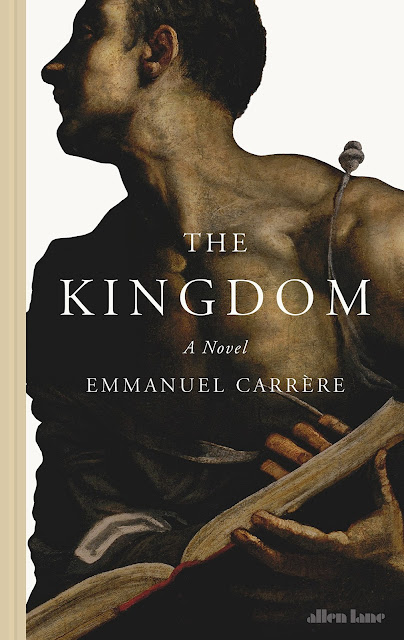 The Kingdom by Emmanuel Carrère review – the man who invented Jesus

A brilliant, genre-bending French bestseller uses the story of the early church as a parable for the author’s own life

his is a brilliant, shocking book. What shocks is not Emmanuel Carrère’s demystifying novelisation of the first decades of the Christian church. Nor is it the intermittent sexualisation of that story (Nikos Kazantzakis, after all, got there first with The Last Temptation of Christ). Nor is it his use of the scholarly methods favoured by theologians to attack theology itself. The real scandal of this book is its relentless narcissism. Only someone with Carrère’s mountain-sized ego could reinvent the story of the early church as a parable for his own life (and, perhaps, vice versa). Luckily for the reader prepared to grapple with this complex, intellectual but compelling book, he is also witty, painfully self-critical and humane. The Kingdom is not without its problems, but it is a work of great literature, which has sold by the hundreds of thousands in the author’s native France.


Carrère is not an easy writer to categorise, working as he does at the intersection between fiction, biography, autobiography and history. He is also – importantly – a screenwriter, and a sensualist who likes to feel the world he describes. The Kingdom (translated by John Lambert) is his attempt to get under the skin of Luke, the author of the Acts of the Apostles, and to imagine his way back into that world. Carrère also thinks, along with many people, that this is the same man who wrote the Gospel of Luke (but not, of course, the disciple of Jesus of the same name). He is also of the view – and he is pretty much alone here – that Luke wrote the New Testament’s epistles of Peter, James and John.
Understanding Luke is therefore the key to understanding the ambience of the early church. As a fellow author, Carrère figures, he should be able to intuit and to re-experience the choices that Luke made. As he depicts him, Luke is an earnest hack, not too bright, with no gift for highfalutin theology, but drawn to charismatic alpha males such as Jesus (whom he knew only indirectly) and Paul (to whom he was magnetically drawn). Carrère’s Luke is also a warped alter ego for Carrère himself (“I know,” he writes at one point, “I’m projecting”). Carrère is, he tells us repeatedly, a smart guy, never far from a clever hit TV series or a Cannes jury. But as recent elections have taught us, self-proclaimed smart guys aren’t always the smartest. Just as Luke was bewitched by Paul’s macho mysticism, so Carrère portrays himself as – despite everything – vulnerable to the charms of modern-day apostles of certainty. First come the Catholic fundamentalists including his priest, Father Xavier, his godmother Jacqueline, and his friend and bromancer Hervé, a 1960s survivor who lives for spirituality. Later, after his disillusionment, come a series of shadowy masters of yoga and martial arts.

The first part of the book is called “The Crisis”, and deals with the transformation of a secular cynic – “the egocentric and mocking Emmanuel Carrère” – into an obsessive Catholic, attending Mass every day, and filling notebooks with endless pious commentaries on John’s Gospel. He paints himself here with a Knausgaardian palette, as an unlovable narcissist whose self-absorption leads him to neglect all around him, particularly his family. Gradually, faith deserts him. It’s a tale of slow disenchantment with the intellectual acrobatics of belief. His pious episode, however, has changed him irreparably; there is no going back to his cynical former self. “Case closed? It can’t have been completely.” Like many a “post-Christian”, he ends up with a great faith-shaped hole inside, which he is desperate to fill somehow. The rest of the book is his attempt to come to terms with that loss.
Setting the remainder of the story in the era of Paul and Luke was an inspired move. Jesus, like Socrates and Epictetus, is pretty much lost to us: all we have are the efforts of later generations to grapple with his legacy. Paul and Luke were also dealing with their own faith hole, albeit of a different kind: they were devoted second-generation Christians who crucially never met Christ himself. The analogies with Carrère’s own situation are marked. Paul is to Luke what Hervé is to Carrère: a rough-edged hippy savant, filled with an uncanny, unpredictable certainty. And just as Carrère rejects organised religion, so Paul and Luke broke with (what Carrère characterises as) the dominant, rule-bound church of Jerusalem, embodied in the austere figure of James.
Carrère’s Luke may have been a bit of a plodder, intellectually speaking, but he was certainly up to the task of “rewriting history”. In fact, Carrère claims, he wrote “pure fiction”. After all, when it comes to miracle stories, there can be no halfway house: you either believe all this stuff is possible or you don’t. This inventiveness stems, in the author’s view, from Luke’s adulation of Paul, which in turn derives from a yearning inferiority complex. Carrère imagines Luke writing the Acts and the gospel while trying to deal with the spectacle of his hero under house arrest in Rome: bitter, battered and past-it. Not broken inside, certainly, but out-of-kilter with the cosmopolitan city. Acts is, as it were, a love letter to Paul in his dotage, an ultimately successful attempt to keep the Pauline flame alive in changed circumstances, in a cosmopolitan city full of new literary influences.

Indeed, so devoted to his hero was Luke, according to Carrère, that he ended up reinventing Jesus in Paul’s likeness. This is where Carrère is at his most deftly subversive, and to explain why calls for a brief excursus. Many academic theologians, he notes, tend to see Luke and Matthew as building on two sets of source material for their gospels: the older gospel of Mark, and another, now lost text known as “Q” (for the German Quelle, “source”). A very different Jesus emerges from Mark and Q. Mark’s Jesus is a healer. The Jesus of the reconstructed Q is, fundamentally, a wielder of clever, enriching aphorisms that turn accepted norms on their heads: “Bless those who curse you, pray for those who mistreat you” – that kind of thing. Carrère is full of admiration for this latter Jesus, who is “just a man, who never asks us to believe in him, just to put his words into practice”.
In fact I think Carrère overstates the originality of this form of discourse, which was not that different from (although not so facetiously amusing as) the language of the Greek philosophers known as the Cynics. Carrère the post-Christian really does still desperately want his Jesus Christ to be a superstar. But what the real Jesus “himself” was like isn’t really the point. What matters is that comparing Luke with Q and Mark lets us see what the specific spin was in Luke’s gospel – in academic speak, his Sondergut (“individual bit”, relative to the other gospel writers) – and here Carrère is at his most mischievous. Luke’s portrait of Jesus, he thinks, was inspired by Paul, and presents a mystical miracle man. The Jesus we know today is – Carrère suggests – Luke’s own creation.
Carrère even hints that Luke may have invented Christ’s resurrection. Q is unlikely to have contained any resurrection story, and the oldest version of Mark’s gospel simply finished with the discovery of Jesus’ empty tomb. Carrère tells us how impressed Luke was by the sight of Paul apparently resurrecting a man called Eutychus (“Mr Lucky” by name, and evidently by nature too). Did Luke, in the grip of Pauline adulation, also expand the end of the Jesus story to include his postmortem reappearance? Carrère gives, as I have said, only a hint. But the reader may remember the opening pages of The Kingdom, where Carrère discusses his involvement with the French TV series The Returned, about a lakeside Alpine village where the dead return to life: “This story of early Christianity is also the story of The Returned.” And it’s a good story too: both were huge international hits (even if Christianity, in his view, turned out to be a “colossal imposture”). This interlacing of past and present stories, this self-consciousness about the fictional voice, is characteristic of the book as a whole.
I have three cavils about The Kingdom. One is that it buys entirely into a Christian-centred view of ancient history, which imagines the Greco-Roman world as a whole as secular and corrupt: “No one believed in the gods any more, but many believed in astrology, magic and evil spells.” This idea that “pagan” antiquity had outgrown its own polytheist religion is a fantasy of Christians both ancient and modern; it is designed to feed the corresponding fiction that they were all yearning for a religious hit of the kind that only monotheism would supply. No serious classicist scholar in the last 50 years would agree.

In a book of this sophistication, however, the reader cannot help seeing the narrator himself as part of the novelistic fiction. Carrère knows full well that the authorial persona he has created has monstrous aspects to it, displaying a distinctively white-male-privileged combination of vanity, preciousness and pomposity. But there is a warm generosity to that voice too, a sincere desire to understand without judging. Carrère genuinely strives to discover what drew the earliest Christians to the mythology of Christ, why they lived and died by his example (however fictionalised that was) – and why it was that the author’s own life fell under the same spell in his Christian years. This is a book that probably could not have been written either by a believer (who would have lacked the distance) or someone who had never believed. It is the work of a post-Christian. Most of all, however, it is a genre-bending book of great flair: a tribute, and indeed a monument, to the power of literary invention.
• The Kingdom is published by Hutchinson.

Posted by Ficciones at Wednesday, September 06, 2017