Hugh Hefner, the founder of Playboy magazine, has died aged 91.
Hefner, who founded the sexually explicit men’s lifestyle magazine in 1953, died at his home, the Playboy Mansion in Holmby Hills, Los Angeles, the publication announced.

Cooper Hefner, Hefner’s son and the chief creative officer of Playboy Enterprises, said in a statement: “My father lived an exceptional and impactful life as a media and cultural pioneer and a leading voice behind some of the most significant social and cultural movements of our time in advocating free speech, civil rights and sexual freedom. He defined a lifestyle and ethos that lie at the heart of the Playboy brand, one of the most recognizable and enduring in history.”

However, others described Hefner as a lecherous pornographer who launched has magazine with a naked centerfold of Marilyn Monroe, taken years earlier and bought for $500. The Playboy mansion also saw a pyjama-clad Hefner attended to by a posse of women clad in bunny ears, all of whom were expected to be sexually available.


Hefner, who was born in Chicago in 1926 to Methodist parents, served in the US army in the second world war, graduated from the University of Illinois and worked as a copywriter for Esquire before launching Playboy magazine in December 1953. The first issue, produced from his kitchen and financed with $8,000 from investors, sold more than 50,000 copies.

The magazine became known for its sexually explicit content, as well as its publication of writers including Ray Bradbury, Ian Fleming, Joseph Heller, Jack Kerouac and Margaret Atwood. Miles Davis was the magazine’s first interview. Other interviews included Fidel Castro, Frank Sinatra, Marlon Brando and the then-presidential candidate Jimmy Carter, who confided that he had “committed adultery” in his heart. John Lennon spoke to Playboy in 1980, not long before he was murdered.
The magazine’s “progressive” approach to sexuality made it a controversial publication, albeit wildly popular, and during the course of Hefner’s lifetime the Playboy brand expanded to include film and print media products, clothing, fragrances, jewellery and accessories and more, all marked with its distinctive “bunny” logo. At the time of Hefner’s death, the magazine itself was published in more than 20 countries, with Playboy Enterprises claiming over $1bn in annual sales from its trademarked assets.

Circulation reached 200,000 within its first year and more than 7m by the 1970s. In 1960 Hefner opened a string of clubs around the world where waitresses wore revealing costumes with bunny ears and fluffy white bunny tails. The writer Gloria Steinem went under cover at the Playboy Club for a seminal series for Show magazine in 1963, which was highly critical.
“I think Hefner himself wants to go down in history as a person of sophistication and glamour,” Steinem said later. “But the last person I would want to go down in history as is Hugh Hefner.” 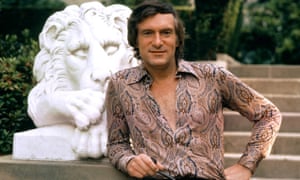 The magazine and Hefner’s lifestyle often provoked criticism, from feminists and conservatives alike. Also in 1963, Hefner was arrested on obscenity charges after publishing nude photos of Jayne Mansfield but the charges were dropped after the jury failed to reach a verdict.
In 1949 he married his first wife, Mildred Williams, with whom he had two children. They divorced in 1959, and Hefner shifted to a more ostentatious lifestyle, buying an enormous house in Chicago. He lived there and then at a second Playboy Mansion in Los Angeles, wearing silk pyjamas and talking openly about his promiscuity. He claimed to have had sex with 1,000 women. Many of the magazine’s centrefold models stayed at the mansion while they were working for the publication.

Hefner was married three times and is survived by his wife, Crystal, a former Playmate, and four grown children: Christie, who served as chief executive of Playboy Enterprises for more than 20 years, David, Marston and Cooper.
Asked what he was most proud of in 1992, Hefner told the New York Times: “That I changed attitudes toward sex. That nice people can live together now. That I decontaminated the notion of premarital sex. That gives me great satisfaction.”
Hefner closed the Playboy clubs in 1988, declaring them “too tame for the times”, although he returned to the business in a limited way in Las Vegas in 2006.
In 2015 Playboy announced it would no longer publish pictures of fully nude women because such images were “passé” in the internet age, but they returned in 2017. “Today we’re taking our identity back and reclaiming who we are,” Hefner said.