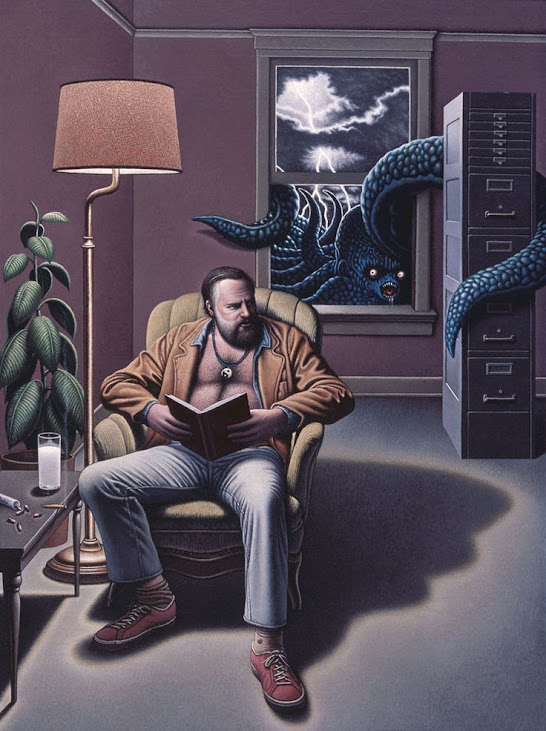 Dick’s premises are undeniably perfect as-is, instantly intriguing and in tune with our daydreams and pet theories about what the future might hold.
by Jessie Guy-Ryan

One night, I stumbled upon an online quotations database and searched for quotes from Philip K. Dick, as you do when you are slightly drunk and in a good mood and just suddenly thinking of a favorite author. I found, among others, a quote from Do Androids Dream of Electric Sheep? (famously adapted as Blade Runner) and posted it to my Tumblr.

It’s been over a year and I still get notifications of likes and reblogs daily—as best as I can tell it’s been seized upon and identified with as a wry expression of teenage ennui. But that's not really what it is.

In context, the quote is meant quite literally. The protagonist and other humans in the world of the novel regulate their moods through the use of "mood organs," which are sophisticated enough to suggest potential mood schedules—a Netflix recommendations list for psychological well being. Rick Deckard's moon organ in the opening of the novel suggests a daylong depression (he opts for something else).

All the same, I think Dick himself would have liked that his quote was misconstrued and appropriated in the digital construction of so many identities. The construction, deconstruction, and transience of identity is central to his work and one of the two greatest strengths in his writing. The other strength is that is he writes the best science fiction premises in the genre.

If you've never read Philip K. Dick, you're still familiar with him. His stories and novels have been adapted into dozens of films, often with more-extreme-than-usual modifications to plot and characters. Dick didn't try to pass off a musclebound construction worker as the everyman protagonist in the short story, "We Can Remember It For You Wholesale" (frequently published under its cinematic title), but Total Recall needed a name (Arnold Schwarzeneggar) who could sell tickets. Blade Runner is a classic film—one Dick himself was excited about, although he didn't live to see it completed—but similarities barely go past the concept and character names. Where the film is an existential noir, Dick’s novel is a sullen meditation on humanity and empathy written in the style of a man who needed to write dozens of novels a year to pay the rent. But the premises in every adaptation—harnessing individuals with precognition to prevent crime, a man who hunts escaped androids on a ruined Earth, a memory implantation procedure revealing a secret identity—are never changed. It’s not surprising to see a novel’s protagonist suddenly become much more physically appealing in the transition to the screen, and generally only slightly less surprising to see a concept simplified or altered to make it work harmoniously with a love story or an action sequence. But Dick’s premises are undeniably perfect as-is, instantly intriguing and in tune with our daydreams and pet theories about what the future might hold. Hollywood producers probably have a list of Dick’s concepts mounted on their office walls: If hack needs good idea, break glass.

Ironically, the book I think is the most film-ready—the book I'm telling you to start with—has yet to be adapted despite Dick writing his own screenplay. Ubik begins as sci-fi heist, with a team of "anti-psychics" hired to protect a facility from psychic intrusion, but then there's a twist, and it's not about that anymore. And then there's another twist, and the book ends with the unsettling feeling that everything you thought you had figured out was only the rug over the trap door. That’s going to happen a lot.

That sense that you probably shouldn’t trust the protagonist, that your hunch about what’s coming next is probably wrong, permeates everything Dick writes. Sometimes your protagonist is right there with you, such as the man who was a famous celebrity until he suddenly wasn’t in Flow My Tears, the Policeman Said. Or sometimes it’s a straight, normal world, except the Nazis just happened to have won WWII (The Man in the High Castle).

Regardless of the reliability of perspectives and the stability of the setting, Dick’s books are always, ultimately, reminding us that as human beings our identities are not permanent; actually, they’re plenty weak to alien interference, drugs, or shifting perceptions of space-time. The Three Stigmata of Palmer Eldritch has some of Dick’s characters sublimating themselves in drug-induced fantasies of a Barbie-like avatar’s life and others striving to earn enough money to change themselves via forced evolution. Bob Arctor’s dual life as a drug addict and an anonymous cop assigned to spy on himself gives A Scanner Darkly the feeling of a slow-motion nervous breakdown. In all of these books, but most noticeably in The Man in the High Castle and A Scanner Darkly, Dick demonstrates how, knowingly and unknowingly, we reconstruct our identities in the face of external forces.

Dick bisected his own identity in VALIS, the first book in the trilogy of the same name, into coolly reliable Philip Dick and the suffering, probably hallucinating Horselover Fat, who becomes embroiled in the Gnostic conspiracy they represent. Fat’s hallucinations in VALIS were autobiographical—Dick claims to have experienced them in 1974—and so was the well-maybe-it’s-real tone of the novel. Dick alternated between acknowledging that they were, or at least could be, hallucinations and appearing to be fully convinced by the delusion. Dick incorporated Jungian psychological theories into his work, and it’s not difficult to wonder if Fat—and by extension, the ill part of Dick—was what he considered his “true self,” with the wry narrator as his persona adopted to face the world. In parallel, the schizophrenics in his novels rarely demonstrate awareness that they may be ill, but they always exhibit a deeper understanding of the rules of the plot.

Dick’s 1974 hallucination was that he was living in a constructed reality and that the Roman Empire had never collapsed. Afterward, he supposedly recalled a dream he had when he was twelve. He was in a comic book shop, searching through hundreds and hundreds of issues of Astounding Stories in search of the issue containing a story titled “The Empire Never Ended.” This story, he knew, would reveal to him the secrets of the universe if he could find it, but he woke up before he did.

So, it seems, he wrote story after story of his own, writing about people who were not heroes or villains but exploring what it would take to change those people, whether through drug use, alien intervention, or thermonuclear war. In Jungian terms, Dick used his outlandish premises to lead his characters toward individuation. But Dick’s authorial power is more imperfect demiurge than omnipotent god; the most astounding twist in Dr. Bloodmoney, Dick’s examination of a town seven years after devastating thermonuclear war, is that some people don’t change at all,mirroring the secret, static empire he believed lurked below our everyday existence. Maybe Dick’s hallucination—the reveal of the empire that never ended—was correct, at least figuratively; underneath it all, nothing really changes.

Jessie Guy-Ryan has a job, a husband, and two cats. They are all in Brooklyn, where she writes about lots of things but only reads science fiction.