After Rain by William Trevor / Review 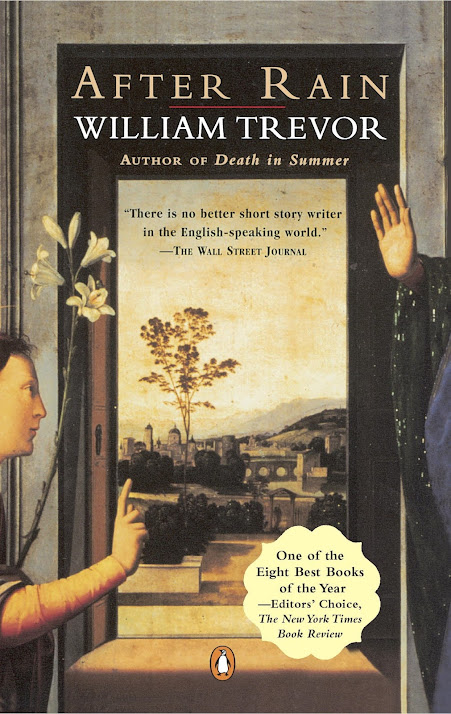 After Rain by William Trevor

Lately I’ve been reading quite a bit of William Trevor – the esteemed Irish writer, widely considered to be a master of the short story form. (I’ve previously written about some of his novels here.) First published in 1996, After Rain comprises twelve beautifully-crafted stories, not a dud amongst them. Like much of Trevor’s work, they centre on ordinary people – perhaps more specifically, the day-to-day developments that shape their lives in the most poignant of ways.

As with other collections I’ve reviewed, I’m not planning to cover every piece; instead, my aim is to give you a flavour of the highlights and what to expect from the book as a whole.

The collection opens with The Piano Tuner’s Wives, a memorable story in which we gain an insight into an elderly man’s second marriage, a relationship tainted by resentment and jealousy. The man in question is Owen, a blind piano tuner, whose first wife, Violet, used to act as his eyes, describing the immediate world in all its glory. Two years after Violet’s death, Owen marries Belle – a woman he first knew many years ago before his previous marriage. In her determination to replace Violet in Owen’s mind, Belle describes people and places in ways that deliberately undermine the visions previously created by her predecessor, such is the sense of insecurity she feels in the marriage.

But even with the dog and the television, with additions and disposals in the house, with being so sincerely assured that she was loved, with been told she was good, nothing changed for Belle. The woman who for so long had taken her husband’s arm, who had a guided him into rooms of houses where he coaxed pianos back to life, still claimed existence. Not as a tiresome ghost, some unforgiving spectre uncertainly there, but as if some part of her had been left in the man she’d loved. (p. 12)

The real tragedy of this story is the fact that Owen knows precisely what Belle is up to; and yet he accepts her actions, however much it might pain him to do so.

Deception also plays a role in A Friendship, a story in which a bored, previously faithful wife, Francesca, embarks on an affair with an attractive man, aided by her footloose friend, Margy. When Francesca’s priggish husband, Philip, discovers the affair through a chance remark made at a party, he feels betrayed on two fronts – not only by his wife but by Margy too, particularly as the lovers have been meeting in Margy’s flat. As a consequence, Philip asks Francesca to end her lifelong friendship with Margy, something he knows will be a wrench for her. While forgiveness might be possible within the marriage, the same sentiment cannot be extended to the friendship – something that Margy is acutely aware of when she reflects on the change in their situation.

Every time she [Margy] played with his children he would remember the role she had played that summer: she could hear him saying it, and Francesca’s silence. Every present she brought to the house would seem to him to be a traitor’s bribe. The summer would always be there, embalmed in the friendship that had made the deception possible – the key to the flat, the seaside house, the secret kept and then discovered. What the marriage sought to forget the friendship never would because the summer had become another part of it. (p. 33)

Trevor also writes brilliantly about the sense of duty and stigma that guides the lives of so many of his protagonists. In Widows, Catherine faces a dilemma when she is approached by a feckless trader following the death of her husband, Matthew – an upstanding member of the community. Mr Leary – a painter and decorator – had been employed to paint the outside of the couple’s house just a few months before Matthew’s death. Now that Matthew is no longer alive to represent himself, Mr Leary calls at the home – not just to pay his respects, but to state that the bill for the paint job was never paid. Catherine believes this to be a lie, particularly as she withdrew the money for the payment herself. However, no receipt or proof of payment can be found, prompting Leary to resubmit the bill. Catherine’s sister, Alicia (also widowed), knows that Catherine is being taken for a fool, and yet there is little she can do to change her sister’s mind.

A disappointment rose in Alicia, bewildering and muddled. The death of her own husband had brought an end, and her expectation had been that widowhood for her sister would be the same. Her expectation had been that in their shared state they would be as once they were, now that marriage was over, packed away with their similar mourning clothes. Yet almost palpable in the kitchen was Catherine’s resolve that what still remained for her should not be damaged by a fuss of protest over a confidence trick. The Guards investigating clothes sold at a jumble sale, strangers asked if a house-painter’s wife had bought this garment or that, private intimacies made public: Catherine was paying money in case, somehow, the memory of her husband should be accidentally tarnished. (pp. 112–113)

Alicia knows the concerns over Matthew’s reputation will grind Catherine down, almost certainly giving rise to new worries and eccentricities. Much to her annoyance, she knows the situation must play out to its natural conclusion. Like many other pieces in this collection, this is a very affecting story, beautifully observed.

The desire to avoid any scandal or shame is also present in The Potato Dealer, one of my favourite stories in the collection. In terms of setting, atmosphere, style and tone, it feels very similar to Trevor’s 2009 novel, Love and Summer, a book I adored. In The Potato Dealer, a young girl, Ellie, falls pregnant following a summer romance, forcing her relatives to arrange a marriage of convenience, thereby avoiding the shame of an illegitimate child. The proposed husband is Mulreavy, a local potato dealer known to the family.

The narrative explores various aspects of the situation: the complex nature of the dynamics within Ellie’s family, Ellie’s relationship with Mulreavy whom she does not love, and Mulreavy’s feelings towards Ellie and her daughter. This is a subtle, nuanced story, one that delves into various aspects of human nature from duty and honour to pride and self-esteem. Once again, it’s perfectly judged.

The longest story in the collection is also the most shocking. Set in a close-knit community in Northern Ireland, Lost Ground tells of a young Protestant boy, Milton, who receives visitations from a woman claiming to be a Catholic saint. When Milton decides to preach about his experiences in the towns of Armagh, his Protestant family are horrified, intervening quite radically as the situation escalates. This is a powerful, heartbreaking story, shot through with the undeniable threat of tension that exists between opinionated groups of different faiths.

In summary, After Rain is a superb collection of stories, up there with Eleven Kinds of Loneliness (by Richard Yates) as one of my all-time favourites. There are definite similarities too with Maeve Brennan’s The Springs of Affection – particularly in terms of setting, tone and insight into character.

Once again, Trevor proves himself to be an incredibly astute chronicler of human nature. These are stories of bittersweet regrets and missed opportunities, of the acceptance of life’s disappointments and duties, of crumbled hopes and dashed dreams. Like much of the best short fiction, these pieces leave enough space for the reader to bring their own reflections to bear on the narratives, opening up the possibilities beyond the words on the page. In many instances, what is omitted or left unsaid is just as important as what is explicitly expressed.

All in all, this is very highly recommended indeed, especially to lovers of character-driven fiction.