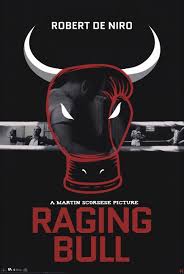 When I first saw it, I was 19 years old; it was at the Screen on the Hill cinema in North London, now renamed the Everyman Belsize Park. When it was all over, I felt exhausted, but also possessed of a strange need to scream, or laugh, or run all the way home, or pick up parked cars and flip them over. The film was Martin Scorsese's Raging Bull – or, to give it the title that appeared on screen, RagingBull; it was run together, like GoodFellas.

It starred Robert De Niro, electrifyingly and horribly charismatic in the role of 1940s middleweight boxing champ Jake La Motta. In the ring, he was a graceless brawler, outside it a repugnant bully and wife-beater who was in thrall to the mob. The film actually suppresses many of the nastier aspects of La Motta's life and essentially takes him at his own lenient estimation of himself, emphasising what was allegedly his initial, pig-headed resistance to gangsters' parasitic involvement in his career. The effect is to combine stunning scenes of brutality and self-destruction with a lethal, even outrageous sentimentalism and self-pity. It's all captured in dreamlike, pin-sharp monochrome cinematography, stark images reproduced like a Weegee crime scene. The result is operatic and mad and compelling.

The fight sequences themselves, with the camera swirling and swooping around the ring, and the soundtrack sometimes gulping out into silence and sometimes moaning with weird half-heard animal noises, are unforgettable: an inspired reportage recreation in the manner of a Life magazine shoot, which also looks like expressionist newsreel footage of a bad dream. The punch-ups that break out in the crowd at that first fight … the screaming woman trampled underfoot, glimpsed and then instantly forgotten about … it still scares me.

I can't think of any other film which so persuasively shows a character getting older. Young La Motta in the ring and old La Motta on the skids, pensively going through his monologue routine in the dressing room before his night-club act: they are the same person, yet different, and of course this was partly because of the weight De Niro famously piled on for the part.

The young fighter is tense, moody, seeming to vibrate like a plucked guitar string: he erupts with anger, which then morphs either into sullen resentment or giggling mockery, as if it is his victims who are behaving absurdly. I remember the first time I saw this film, being utterly fascinated by Jake, self-consciously seated at night clubs or restaurants, accepting the proffered handshakes of fans or gangsters negligently, with a wince of polite impatience or discomfiture. Guiltily, I thought: imagine being that cool!

Old La Motta is quite different. With an audacious absence of Method acting, he drones his way through Brando's On the Waterfront speech, thoughtfully puffing his cigar. Actually, De Niro does a much stronger impression, when young Jake confesses to his brother his darkest anguish: "No matter how big I get … I ain't never gonna fight Joe Louis." That nasal, glandular whine: for a moment, it is pure Brando.

Joe Pesci is superb as Jake's pugnacious, exasperated brother and manager Joey. Frantic with worry and impatience at first; later he appears older, balder, with a thin moustache, utterly unable to respond to Jake's boorish attempts to effect a tearful reconciliation in the street. Unlike Charley in On the Waterfront, Joey is the brother who really is, for his sins, looking out for Jake. He gets him a championship shot. But first, of course, Jake must – in the time-honoured fashion – take a dive. At the height of his prestige, he has to be matched with a patsy on whom bookies' odds are sky-high. The mobsters bet big on the no-hoper and Jake has to lose. In return, the wiseguys will arrange for a title fight.

This grotesque ordeal for Jake is, in its way, at the very centre of the film's meaning. It isn't simply about the money: it is a dysfunctional, abusive ritual in which he has to be emotionally mutilated like a gelding by his sneering mob sponsors. Like all contenders, he has to be humiliated, shown who's really in charge. He must bow the knee to East Coast boss Tommy Como, played by Nicholas Colasanto, who in his creepy avuncular way paws and slobbers over Jake's wife Vikki, played by Cathy Moriarty, in his hotel suite before the fight. After Tommy has gone, Jake screams abuse at Joey and Vikki, whom at the height of his paranoia he will suspect of having an affair.

Moriarty is tremendous; like Jake's first wife she is utterly bemused and disgusted and scared by his behaviour, and simmers with self-reproach at having put up with it for as long as she has. Yet Vikki's first date with Jake at the crazy golf course is an extraordinarily romantic sequence: the clear sunlit sky of this atypical outdoor scene shows up like a sugary-wet expanse of pale grey across the screen. It is so weirdly innocent, even while it crackles with sexual tension, even when Jake casually acknowledges the existence of his wife who he says must be "out shopping" when he takes Vikki back to the apartment. Jake had first met Vikki while she was hanging out at the swimming pool. I can still remember my 19-year-old self's awe at how Jake provokes a gorgeous, reluctant smile from the incandescently beautiful Moriarty. Throughout university, I was obsessed with this film, and watched it about once a month.

Cut to 30 years later, and I am at this year's Cannes. As a juror on the Un Certain Regard section, I have the headspinning honour of being at an official dinner seated near De Niro. My fellow juror Geoff Gilmore, artistic director of the Tribeca film festival, cheerfully advises me to go up and introduce myself, and so I do. Jittery and numb, I walk towards the great man's unmistakable profile – he is talking to someone very important. Am I going to pass out? Well, I get his attention and stammer some sycophantic nonsense.

Did I tell him about when I first saw Raging Bull? I think I might have explained that the Screen on the Hill is now called the Everyman Belsize Park, but that the name change happened only recently. I can't remember. De Niro smilingly shook my hand: briefly, negligently with a wince of polite impatience or discomfiture. Deja-vu made my awestruck expression even more bovine.