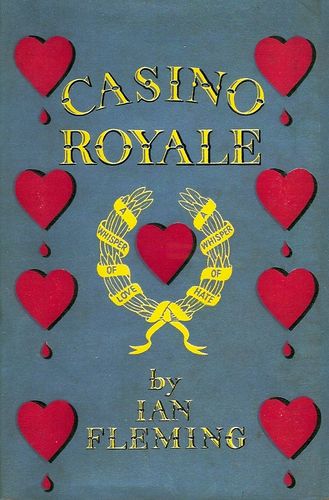 Casino Royale is the first novel written by Ian Fleming featuring the 00 agent Commander James Bond, published in 1953. The plot revolves around a plan to take down Le Chiffre, an agent of SMERSH, by bankrupting him in a high-stakes game of Baccarat Chemin-de-fer.

Casino Royale has the unique distinction of being the only James Bond novel to be adapted three times: as a 1954 American TV production, a 1967 spoof film, and finally as the basis for the 2006 film of the same name.

The head of Station S, Fawcett formulates a plan to take down SMERSH operative Le Chiffre who is the head of communist sympathizing trade unions in northern France, who is attempting to earn money in game in Baccarat Chemin de fer in order to compensate for the loss of his chain of brothels which were shut down after a law banning prostitution surfaces. M sends out his finest gambler, 00 agent Commander James Bond to play in the game. Station S's Vesper Lynd, Texan CIA agent Felix Leiter, and Frenchman René Mathis of the Deuxième Bureau are sent by their respective superiors to assist Bond in his endeavour.

Bond checks into the hotel and prepares his operation. Before Bond has a chance to face off with Le Chiffre, the Soviet agents make an attempt on his life. Bond survives a bomb blast unscathed. He makes it to the casino and confronts Le Chiffre. Bond then squares off against Le Chiffre. During the game, Bond is nearly killed by a gunman sent by Le Chiffre. Soon Bond goes bankrupt, but Felix Leiter provides him with extra capital to continue playing. Bond ultimately wins and bankrupts Le Chiffre, earning a sum of 40,000 Francs. After his win Bond takes Vesper out for a drink. She is lured into the parking lot and kidnapped by Le Chiffre. Bond pursues her in his Bentley and, after he crashes his car, is captured himself.

Subsequently Vesper is taken away by Le Chiffre's men while he physically tortures Bond, who wants to know where the cheque for the money he won was hidden. After a while, he decided he couldn't extract information from Bond and begins sadistic mental torture on him. Shortly after, a SMERSH agent enters and executes both Le Chiffre and his two men by shooting them in the head. The agent spares Bond's life because he had been given no orders to kill him, then tells him about SMERSH's ideals: That they are only known to give mercy by chance or by mistake (Both of which have been done in a single day to James Bond) then cuts a "Ш" (A Russian/Cyrillic symbol associated with spies) into Bond's left hand for future reference. Delirious, exhausted and in tremendous pain, Bond passes out immediately afterward.

Two days later, Bond regains consciousness and Vesper nurses him back to health. While in the hospital Bond contemplates his future as a spy. Three weeks later, they go on vacation where Bond starts a romantic relationship with Vesper. They take a vacation at a French seaside inn. They start a passionate relationship and Bond decides he will ask Vesper to marry him.

Vesper soon realizes that a SMERSH agent using the guise "Adolph Gettler" was watching their movements. Vesper grows increasingly fearful of her death and Bond's death from this man. Bond catches Vesper making a secret phone call and acting duplicitously. Bond is frustrated and their relationship becomes strained. It comes to a head when Bond demands to know her secret. She promises to tell him the next day. They make passionate love and Bond retires to his own room. Finally, unable to handle the guilt, Vesper deliberately overdoses on sleeping pills that night to commit suicide.

In the morning, Bond finds a letter from Vesper explaining that she was working for the MWD to free her boyfriend who served in the Polish RAF. She had also nearly sabotaged the operation in the casino by not getting in between the gunman. She then tells Bond she started to fall in love with Bond, and this ended up drawing the ire of SMERSH, who sent the agent to track Vesper and Bond. Vesper also stated she wanted to escape to South America, start up a new life with Bond, and have a baby with him. She then finishes the letter with "My love, my love."

Because of Vesper's lies and the engraving of "Ш" into his right hand Bond decides to oppose SMERSH, an act which sets the entire series in motion. The novel then ends with Bond telling a liaison officer, that "the bitch is dead now". 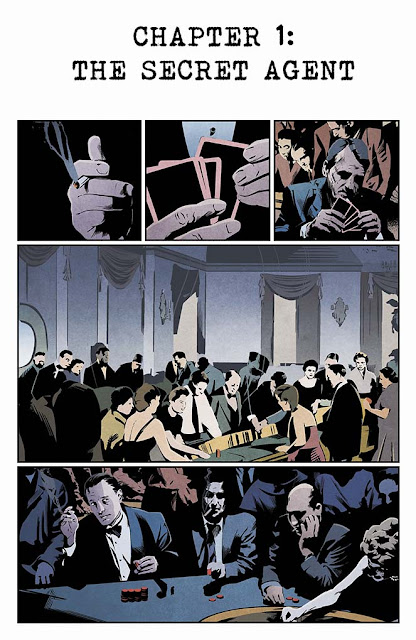 Casino Royale was the first James Bond novel to be adapted as a daily comic strip which was published in the Daily Express newspaper and syndicated worldwide. It ran from 7 July 1958 to 13 December 1958, and was written by Anthony Hern and illustrated by John McLusky. All strips are missing the familiar "JAMES BOND" heading in the top left corner which was used on all subsequent adventures.


To aid the Daily Express in illustrating James Bond, Ian Fleming commissioned an artist to create a sketch of what he believed James Bond to look like. The illustrator, John McLusky, however, felt that Fleming's 007 looked too "outdated" and "pre-war" and thus changed Bond to give him a more masculine look.