‘The mountain in the distance is her goal but we don’t think she’ll get to the top. It’s going to take her another five years just to get to the bright rock formation below’

Mount Sharp was the first thing Curiosity ever took a photo of. The biggest Mars rover ever, Curiosity landed on August 2012, having spent 253 days hurtling through space. This shot of Aeolis Mons, to give the peak its official name, was taken three years later and the image has been enhanced to bring out colour variations. That’s why the sky looks blue. It would be highly unusual to ever actually see anything blue on Mars – there’s so much iron oxide around, suspended in the atmosphere like dust, that it colours everything. People call Mars the red planet, but technically – when measured scientifically – it’s yellowish brown.
Mount Sharp, located in the middle of Gale Crater, has been the object of the mission all along. Since it’s made of sedimentary rock, it should give us a record of the planet’s major climate changes. The goal is to decipher that record and learn more about Mars’s ancient past. Right now, Curiosity is heading up the mountainside, exploring Vera Rubin Ridge, which you can see stretching along the bottom of the image. The dark material above that is basaltic sand, a common volcanic substance on both Mars and Earth. Most of our ocean floors are covered in it.
The good stuff is just a bit further up, in an area rich in clays and sulphates. Clays are formed in more neutral waters, which is to say in Earth-like conditions, and that’s why they’re of such great interest: they are perhaps conducive to original life. Martian rocks are between three to four billion years old, meaning they date back to when the solar system was young. We have ancient rocks on Earth but they’re much rarer, because plate tectonics have destroyed so many of them. That’s one advantage of exploring Mars – no plate tectonics.

Curiosity is the size of a Mini Cooper, with a mast as big as a tall person and a 7-foot robotic arm. She’s pretty robust: she can navigate knee-high obstacles and, at her top speed, cover about 30 metres an hour, depending on the terrain. The craft has 17 cameras, able to take single and stereo images, which provide us with 3D information about the landscape. She shoots in colour for scientific purposes and in black-and-white for navigation.
Nearly 100 people from all over the world are involved in operating Curiosity. Every day we decide on her next goal: it might be to drive to a rock we’ve seen in previous pictures, take some shots, then turn left and take some more. A typical drive is 50 metres, occasionally 100 if it’s very flat, but if the terrain is rocky, the daily journey might be as little as 10. Moving Curiosity and activating her robotic arm are complex operations requiring careful planning. Depending on where Mars is relative to Earth, our commands are sent out from either California, Madrid or Canberra. About 10 to 15 minutes later, Curiosity gets to work, then sends back all her data overnight while she sleeps.
When something goes wrong, things can get emotional, because we can’t just go and fix her. One of her wheels is damaged, which means we don’t let Curiosity pick her own path any more. And she’s been carrying around the same sample of sand dune for months now, because the drill feed mechanism isn’t working. The engineers are hoping to find a fix soon. 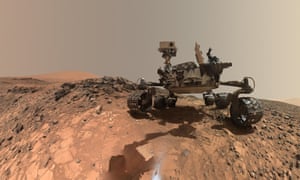 This is me on Mars … self-portrait showing Curiosity on the lower slopes of Mount Sharp. Photograph: Curiosity Mars rover/Nasa

We can’t say for certain how long Curiosity will last. The first rovers on Mars, Spirit and Opportunity, were designed to last 90 days. Opportunity is still going 14 years on, though Spirit got stuck in some sand after six years. It was pretty sad, like losing a child. We knew she was unlikely to survive the winter. Unlike those rovers, Curiosity has a nuclear-power source – a radioisotope thermal electric generator. The temperature on Mars fluctuates enormously, from 15C on a warm day to -70C overnight, which means we need heaters just to get the motors and instruments to function. At some point, we know, the generator will peter out.
There’s no expectation that Curiosity will get to the top of Mount Sharp. The brighter rock formations higher up are probably as far as she will go. Who knows what we will find there. Covering that distance will take years, though. It has taken over five just to drive 18km – it could easily take another five to get to those bright rocks. Things are slow, we’re taking our time. But, you know, we’re doing geology on Mars. It’s never going to be easy.

Made in: Nasa’s Jet Propulsion Laboratory, Pasadena, California.
Launch date: 26 November 2011.
Touchdown: 5 August 2012.
High point: “The high-precision soft landing of the rover – on its wheels.”
Low point: “When significant damage, caused by pointy rocks, was discovered in the zig-zag treads on Curiosity’s left middle wheel. The 2020 rover will have more robust wheels.”
Top tip: “Watch out for pointy rocks!”

Posted by Ficciones at Wednesday, February 21, 2018