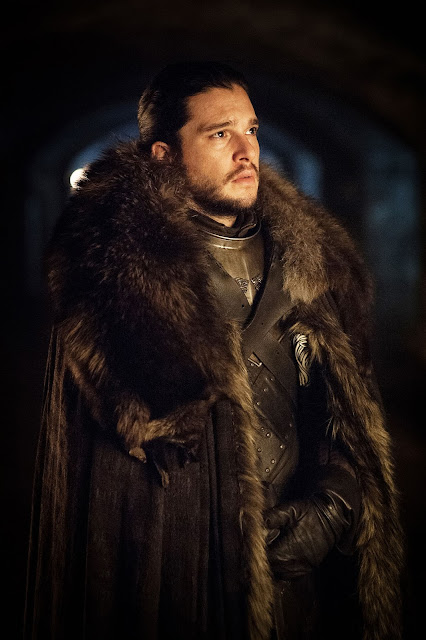 Earlier today, HBO surprised us with new photos from Game of Thrones' seventh season. It didn't take long for fans to analyze the pictures and string together some theories on the upcoming plot.
This picture of Jon Snow has specifically attracted a lot of attention (and no, not just because Kit Harington is easy on the eyes). If you look closely at the background, it seems he's standing in the crypts of Winterfell, as told by the dark lighting and enclosed stone arches behind him. The location is significant because Lyanna Stark, Ned's sister and Snow's biological mother (which was confirmed last season), is buried there. Hence, a new theory supposes that in this photo, Jon is looking at Lyanna's grave.
Does that mean he discovers his true patronage in Season 7? How does he find out? Who tells him? And what is his reaction like if/when he realizes he's not Ned Stark's son, but Lyanna's? More importantly, does he also find out that his father is Rhaegar Targaryen? According to another theory, a clue about Snow's real father lies in Lyanna's crypt.
What's certain is that it seems Jon has learned something in this scene. Maybe he really doesn't "know nothing" after all.
BAZAAR