Portrait of the Author as a Historian / Giuseppe Tomasi di Lampedusa

Portrait of the Author as a Historian: Giuseppe Tomasi di Lampedusa

Witnessing the slow decline of his native Sicily, the last Prince of Lampedusa saw both blame and possible salvation in the island’s unique location and history, writes Alexander Lee. 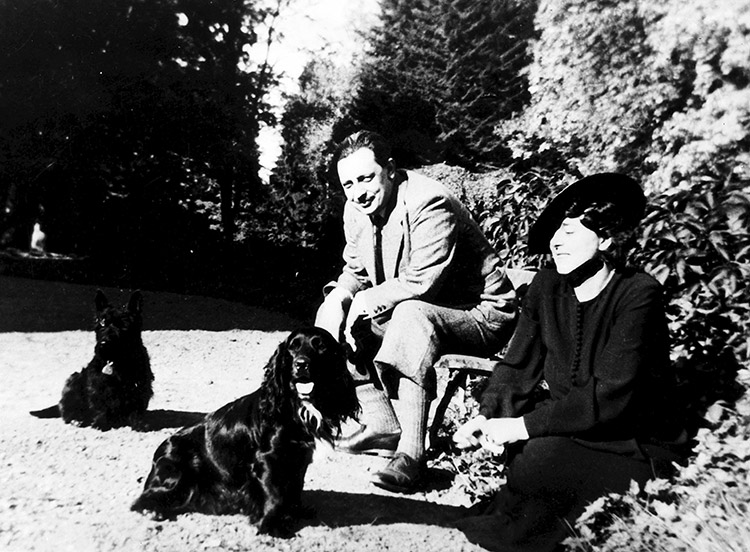 Giuseppe Tomasi di Lampedusa and his wife, Licy, 1940Whenever Giuseppe Tomasi di Lampedusa thought of the Sicily of his youth, it was always of ‘nature’s Sicily’. Though he had been born into aristocratic privilege and could recall many great events – such as the assassination of Umberto I (July 29th, 1900) and a visit from the ex-Empress Eugénie of France – his earliest memories were coloured by the magic of the Sicilian landscape. Even in the last months of his life he, like the characters in ‘Lighea’ (1956-7), would close his eyes, and recall

the scent of the rosemary in the Nèbrodi mountains, the taste of Melilli honey, the wavering harvest seen from Etna on a windy day … the gusts of perfume poured by the citrus groves onto Palermo at sunset … [and] the enchantment of … summer nights in sight of the Gulf of Castellammare, when the stars sparkle on the sleeping sea.

Left to play among such wonders as a boy, he had believed himself to be living in a fairytale kingdom, timeless and unchanging. But as he grew older, his faith was broken. Wherever he looked, he saw Sicilians ravaged by the march of time. His family fell on hard times; their villa at San Margherita di Belice was sold to pay their debts; part of the palace in Palermo had to be rented out; and, as death approached, he could hardly make ends meet. In the city the cosmopolitan elegance of the Belle Époque disappeared and was replaced by a hidebound parochialism. The countryside suffered even more. Before the First World War, liberal governments watched it degenerate into a backward, agrarian society dominated by bourgeois Mafiosi. Mussolini did little to stop the slide. And despite the land reforms of the 1950s, rampant corruption had prevented any real progress from being made. As Lampedusa’s cousin Fulco observed, death seemed to be at home in Sicily.

But how had an island that was so beautiful, so fertile and so rich in resources fallen so low?

In Il gattopardo (literally The Ocelot, but usually translated as The Leopard), Lampedusa placed the blame squarely on noble families like his own, which, despite their traditional role as bastions of Sicilian society, had failed either to preserve their feudal prerogatives or to embrace the modern world as fully as they might. Inspired by the life of his great-grandfather, the novel follows Fabrizio Corbèra, Prince of Salina, as he struggles to uphold the aristocratic and paternalistic values he holds dear, in the face of the social and political changes of the late 19th century.

Italian unification poses the most immediate challenge. Within days of Garibaldi’s landing at Marsala (May 11th, 1860), Don Fabrizio realises that he is facing a difficult choice. Should he remain loyal to King Francis II of the Two Sicilies, upon whose legitimate authority justice and right were founded? Or should he accept that the Bourbon monarchy is no longer able to defend the old order? Would it not be wiser to recognise Vittorio Emanuele II as king of Italy, even at the cost of his ideals?

There is also a wider economic danger. Like many Sicilian nobles, Don Fabrizio pays little attention to the management of his estates and has seen his wealth decline steadily in recent years. His nephew, Tancredi Falconieri, has already been left destitute by such indifference and it is clear that, unless something is done, his own children will be forced to sell off their lands to the greedy bourgeoisie who grew richer by the day. But what is to be done? Should he regard such matters as beneath his dignity? Or should he adopt bourgeois ways, manage his estates actively and even marry his relations to nouveaux riches?

Don Fabrizio tries to be pragmatic. He sees that Tancredi had been right to suggest that, for everything to remain as it was, everything would have to change. Overlooking his daughter’s suit, he arranges Tancredi’s marriage to the daughter of Calogero Sedàra, the vulgar mayor of Donnafugata, realising that it will bring his nephew the money to rebuild his fortunes. He supports the creation of the kingdom of Italy, declines a senatorship, and – after proposing Sedàra for the position – even takes the mayor’s advice about estate management.

For a time, there is some hope. The prince’s income briefly increases and Tancredi eventually becomes an ambassador. But Don Fabrizio has only postponed the inevitable. Soon enough, the Corbèra’s expenditure again exceeds their income. Piece by piece, their lands are sold, until almost nothing is left. By the time of the prince’s death in 1883, the ‘Leopards and Lions’ of old have been usurped by ‘jackals’ like the Sedàra, while the peasants they once protected have become prey for ‘hyenas’. Over the next 20 years, things only grow worse. In I gattini cieci (The Blind Kittens) – the unfinished sequel to Il gattopardo – the Corbèra have become impoverished dilettantes, frittering away their time in Palermo while Batassano Ibba (a ‘quasi-baron’) oppresses their former tenants with appalling rapacity.

But if aristocrats such as Don Fabrizio were to blame for Sicily’s decline, Lampedusa nevertheless believed that their short-sightedness was the product of a wider malaise. From the Annales School, of which he was an avid reader, he derived the notion that the Sicilians’ fate had been determined by the geographic conditions in which they found themselves.

As Don Fabrizio explains, the ‘violence of the landscape’, the ‘cruelty of climate’ and the location of the island had formed the Sicilian character. Alluring and adrift in the middle of the Mediterranean, she had grown used to being assailed by peoples from far and wide – Greek, Roman, Arab, Norman, French, Spanish; and yet, sweltering in a feverish climate, she had succumbed to a ‘voluptuous torpor’ from which nothing could rouse her. Indifferent to all that was new, the Sicilians greeted those who landed on their shores with docile obedience, then resentment, but never with any understanding. They were content to remain passive spectators of change, seldom thinking any more than a year or so ahead. And yet, despite it all, Sicily’s wonders had instilled in them an absurd belief that they were as immortal and unchanging as the gods themselves. They had been cursed by nature.

Yet if Sicily’s landscape was the cause of its people’s suffering, it also offered them a means of transcending the tragedy of their history. Whatever else might change, the island itself was eternal. Her nature neither slept nor grew old. Amid the waves of the wine-dark sea, in the searing summer sun, heaven and earth met and death had no meaning. By accepting her embrace, Lampedusa believed, Sicilians could escape their sorrows into an undying world of poetry and song.

He had already begun to explore this idea in Il gattopardo. Desperate to ‘go on living the life of the spirit’, Don Fabrizio throws himself into astronomy and finds solace in charting the course of comets across the Sicilian skies. But it was in ‘Lighea’ that Lampedusa explained his thoughts most clearly.

After being rejected by his lovers in late 1938, Paolo Corbèra – a descendent of Don Fabrizio working as a journalist in Turin – takes to drowning his sorrows in a café frequented by artists and writers. There, he meets Rosario La Ciura, whose father had been the Corbèra’s tenant but who is now an eminent classical scholar. Sharing a deep attachment to Sicily’s landscape and a profound sorrow about its present condition, they quickly become friends.

One night before setting off on a journey to Naples, La Ciura invites Corbèra to his apartment, where he relates a curious story from his youth. Aged 24, he had gone to prepare for an examination in a secluded house by the sea. Enchanted by the beauty of the place, he would row out into the bay and declaim Greek verses at the top of his voice. But one morning, he was amazed to see ‘the smooth face of a sixteen-year old emerging from the sea’ beside him. Flashing a smile, she lifted herself into the boat, only to reveal that she had a fish’s tail instead of legs. She was a Siren. Her name was Lighea.

Lighea and La Ciura became lovers. For three weeks, they lived as man and wife and the immortal siren introduced him to her life beneath the waves. But it could not last. Staring wistfully out to sea after a storm, Lighea was unable to resist her sisters’ calls. Plunging back into the water, she vanished in the foam.

His tale ended, La Ciura leaves for his journey the following morning. But by dawn the next day, Corbèra learns that he had fallen from his ship into the sea and that his body had not been found. No longer willing to endure the present, he had returned to seek Lighea’s eternal embrace once more. For Lampedusa, if Sicilians wished to escape their sorrow, they too should heed Sicily’s Siren call.

Alexander Lee is a fellow in the Centre for the Study of the Renaissance at the University of Warwick. His book The Ugly Renaissance is published by Arrow.