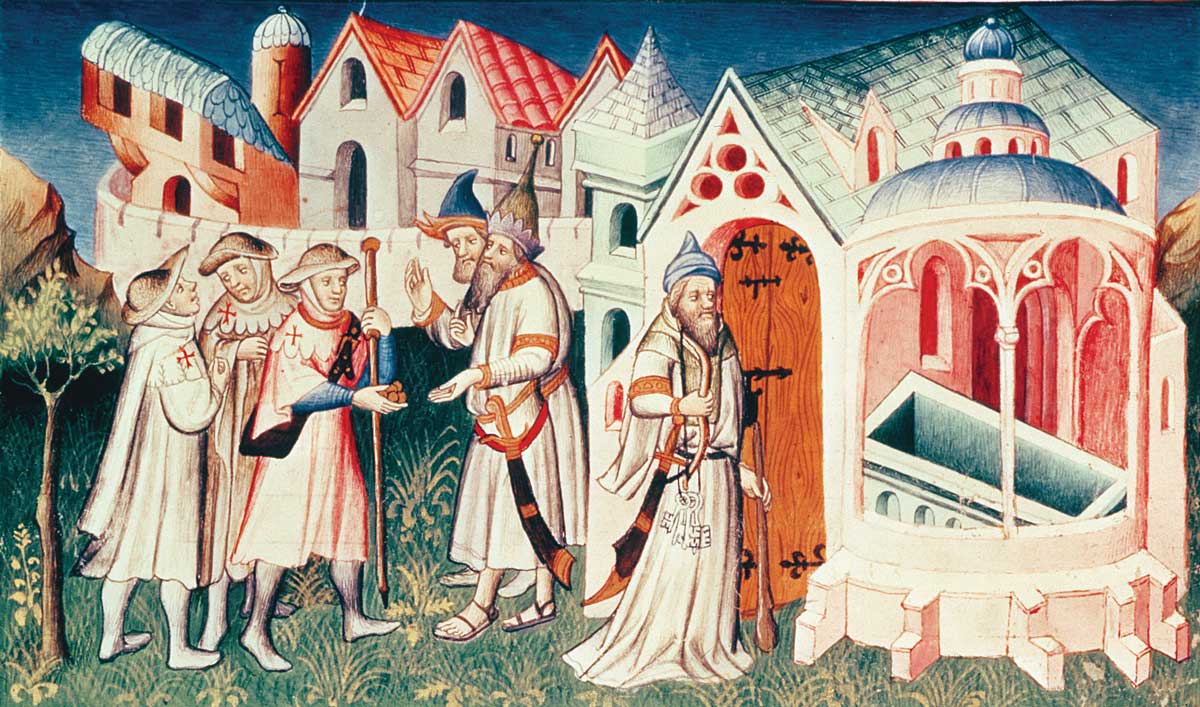 Pilgrims in front of the Church of the Holy Sepulchre in Jerusalem, from Liber peregrinationis, French, c.1410 © Bridgeman Images.

The spiritual power of medieval relics meant that Jerusalem, or a dragon, could be remade anywhere.

What do we miss when we describe a pilgrimage simply as travel to a destination – to Rome, or to Jerusalem? What makes a location worthy of pilgrimage? Medieval travellers explained: Chaucer’s pilgrims headed for Canterbury, ‘to seek the holy blissful martyr’, Thomas Becket. Bernhard von Breydenbach, a German clergyman who published a hefty pilgrimage account in 1486, summarised his trip to Sinai as ‘to the praiseworthy virgin and martyr St Katherine’. Though dead, these saints were as available for visiting as anyone living and, at the same time, their bones marked these places as holy. This is even starker in Katherine’s case: in life, she had no connection with Sinai. In death, her relics give it a distinct meaning, transcending even its biblical significance. Relics and medieval pilgrimage are thus intrinsically connected – but relics are much more than just holy bones and pilgrims’ relationships with them could be complicated.

William Wey, an Englishman who travelled twice to Jerusalem (1458, 1462) and once to Santiago de Compostela (1456), was so keen on relics that when he compiled ten reasons for Christians to visit the Holy Land, the final one was a long list of the relics to be encountered en route. This list makes it clear how broad a heading ‘relics’ really was: it covered not only such predictable items as saints’ bodies and the accoutrements of the Passion (Longinus’ spear shaft, thorns from Christ’s crown), but also footprints in stone, marks on the ground from the Virgin’s milk, regular marvellous appearances of water and a folk miracle that had left no physical trace. When Wey returned, he constructed a replica Holy Sepulchre chapel at Edington Priory, where he placed the ‘relyks’ he had brought home. These included stones from Calvary, the Holy Sepulchre, the place where St Helena discovered the Cross and the grotto in Bethlehem. Using these relics, Wey legitimised and sanctified his Wiltshire Jerusalem in much the same way that Compostela and Sinai authenticated their associations with James and Katherine.

These stone relics are probably similar to those acquired in 1506 by Thomas Larke, another English pilgrim and later confessor to Cardinal Wolsey. While Wey tells us what he did with the relics, Larke tells us how he got them. After dinner at the Franciscan monastery of Mount Sion, ‘the warden rose from the board and took a basin full of folded papers with relics in each of them … and gave every pilgrim he passed a paper with relics of the holy places about Jerusalem, which we took as devoutly as we could’. In this period, the Franciscans in Jerusalem were essentially operating a package business, seeking to ensure that every pilgrimage was as consistent as possible – including how they were described by returning pilgrims. Distributing souvenir relic sets was part of this process. When pilgrims took pieces of the Holy Land home, they literally brought back the Franciscan Jerusalem – and this is the Jerusalem which Wey constructed at Edington.

But how can mere stones from the ground qualify as relics? Breydenbach makes the case: Medieval Christians understood that honour was due to the bones of saints and the places where they spilled their blood. The faithful visited and venerated both. It is therefore logical to honour in the same way the land which Christ hallowed with his life and death. Contact with a holy body or blood was a standard way of acquiring relic status and the entire Holy Land thus becomes a relic. This status becomes a defence for the entire practice of Holy Land pilgrimage: where relics exist, pilgrimage must follow. No wonder that its very stones had the power to create Wey’s own Jerusalem.

But medieval religion was not monolithic and not all pilgrims took an entirely uncritical approach to relics. Arnold von Harff, a knight who set off from Cologne in 1496, could be rather cynical on the subject. He makes no bones about highlighting duplicates, noting the multiple resting places of St Matthias, the many arms of St Thomas and the two heads of St James. Even without the duplicates, Harff would have been on the alert after a journey down the Nile, where he encountered crocodiles for the first time and learned about the local merchants’ wheeze of selling the skins abroad. Harff then realised that he had seen a crocodile skin hanging in chains in the church of Santa Maria in Portico, where he was told that ‘it was the skin of a dragon, which I believed, until I found out it was a lie’. Upon reaching Santiago, near the end of his lengthy pilgrimage, Harff attempted to bribe the shrine guardians into showing him the saint’s remains. They responded that ‘whoever did not believe that the holy body of the Apostle St James the Great lay in the high altar, and doubted, and wanted to see the body, would immediately become as mad as a rabid dog’. Harff, rather succinctly, simply comments: ‘Thus I understood what they meant.’ But it would be a mistake to view Harff as a sceptic, or even as some kind of proto-reformer. He does not ascribe malign intent to anyone within the Church, simply commenting on any particularly dubious relics: ‘I leave the errors of priests up to God to decide.’ And the existence of various duplicates does not affect his interest in other relics, which he lists enthusiastically – including a Parisian unicorn horn. Being devout did not preclude investigation – however poorly it might be received – nor did an enquiring mind preclude an eager engagement with relics when grounds for suspicion were not offered. Ultimately, for Harff, as for many other medieval pilgrims, relics were extraordinarily powerful devotional objects, capable of turning an ordinary location into a place of pilgrimage.

Mary Boyle is a Leverhulme Early Career Fellow in Oxford’s Faculty of Medieval and Modern Languages and the author of Writing the Jerusalem Pilgrimage in the Late Middle Ages (D.S. Brewer, 2021).