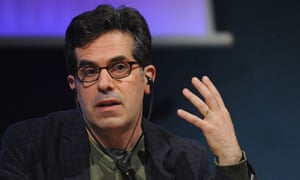 
Jonathan Lethem: 'I'd written three novels and several dozen short stories before anyone talked me into a book review'

New Yorker Jonathan Lethem on his late introduction to non-fiction, defending plagiarism and the joys of Dr Seus

New Yorker Jonathan Lethem, 48, found success with the novels Motherless Brooklyn and The Fortress of Solitude. His latest book is a collection of essays, The Ecstasy of Influence.

In the preface to your new collection, you write of how, before starting an essay, you first need to "invent a character" to do the writing. Where does this unease with non-fiction come from?


I came to writing from a really particular angle. I grew up in a visual arts household – my dad was a painter – and I thought that was what I was going to do. At the same time, I loved stories and reading. By the time I was making the switch to stories, all of my way of thinking about art-making was from the plastic arts. I thought of stories and novels as these invented, conjured objects. None of it was about the personal, confessional, diary-keeping impulse, nor about the scholarly idea of writing about things to be accurate. It was about making up stuff. I'd written three novels and several dozen short stories before anyone talked me into a book review.
One of the pieces in the book is about the unhappy experience of being reviewed by James Wood. What was your beef with him?
That piece is not a comprehensive critique of Wood. It's really a memoir about what it's like to be reviewed by someone who everyone told me had awesome and comprehensive powers. Certainly the manner of his presentation – even putting out a book called How Fiction Works – has this implication. I had a glancing encounter with his notion of authority and it irked me. But I was really writing about my own confusion.
Much of your writing suggests an ambivalence about the internet. You see it as a democratising force but also something darker?
There's a real push and pull. The web exposes tensions that already exist: between egalitarian impulses and elitist yearnings for authority and control. It makes them very naked. Which can be useful, but also quite raw and uncomfortable – to have normally smoothed-over anxieties brought into such violent visibility as they are, for example, by internet comments sections.
A lot of your writing about culture concerns physical artefacts - record sleeves, books, comics. Isn't this aspect of cultural appreciation lost online?
Maybe. But you see the most amazing acts of curation and resurrection on the internet. It is a spectacular Borgesian library, and at the same time it represents a flattening of a tangible or a hierarchical life. I had to decide what record to own. Now I just own them all. It's very complicated.
What's most excited you recently?
My own sensors are in a disadvantaged state because I'm the parent of two very young boys and at the same time I've taken this big teaching job [as Disney professor of creative writing at Pomona College, California]. My ability to attend to stuff is very retarded in two ways: I'm constantly trying to figure out what to talk to my students about; and at the same time I'm reading a lot of Dr Seuss and getting up at three in the morning.
The first thing to go is my own optional appetites.
The only previous occupant of the Disney chair was David Foster Wallace. Ironic that two such anti-corporate writers should be given the post.
Yes, they'll probably have to go for Slavoj Zižek next!
THE GUARDIAN