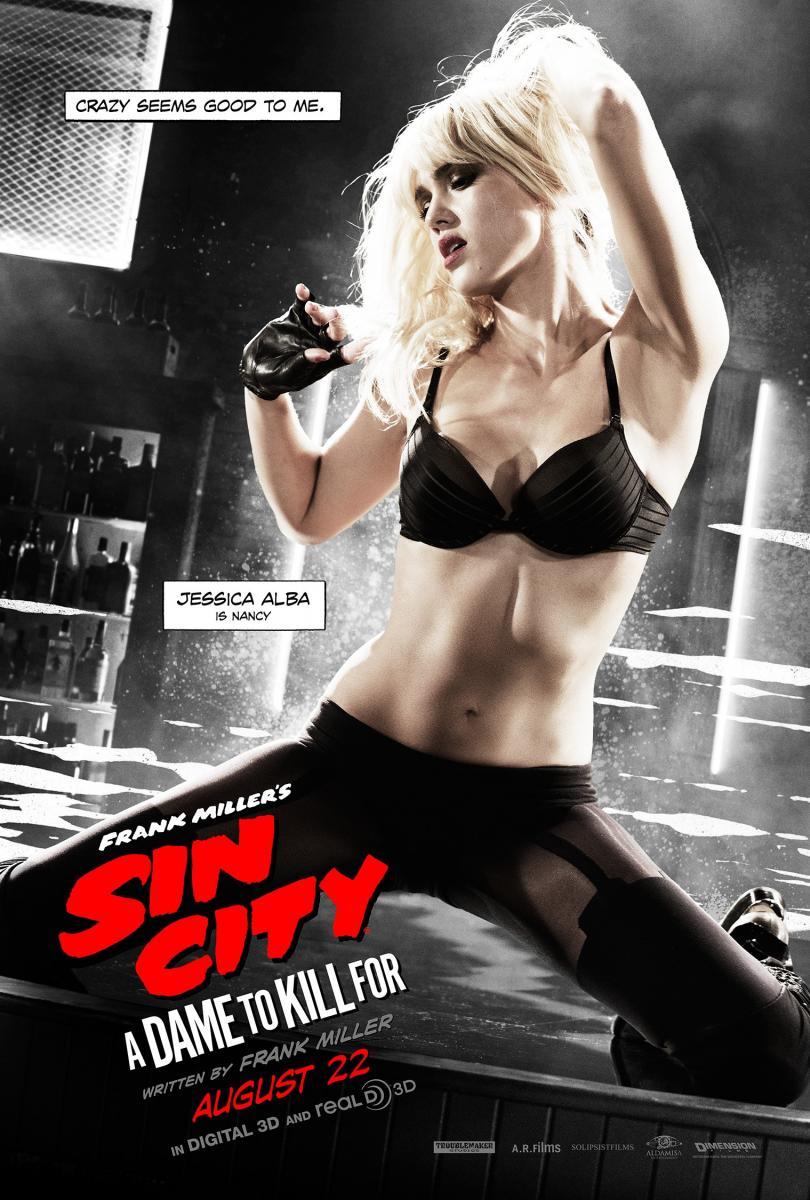 Everyone knows Robert Rodriguez‘s and Frank Miller‘s cult movie Sin City: finally, the authors have started to work on the sequel Sin City: A Dame to Kill For. Unfortunately, there have already been some problems on the set, since Jessica Alba doesn’t want to play the “hottest” scenes regarding her character, Nancy Callahan, since she doesn’t feel comfortable with her body anymore, after two children. Since she’s lately been the most talked actress of the film, we’re going to speak about her character, Nancy.


Nancy Callahan was born and raised in Basin City, lovely nicknamed Sin City, really not a good place to raise a child in. When she was only eleven, she was kidnapped by Roarke Junior, a child-raper and serial killer, whose actions were promptly covered by Senator Roarke, his father and the city’s most powerful man. Nobody thought Nancy would have come out of it alive, but, just before Roarke could begin with her, she was saved by police detective John Hartigan, who couldn’t care less of Roarke’s influence and shot the maniac’s ear, hand and genitals. Before Hartigan could finish Roarke, anyway, he was betrayed and shot by his partner, Bob, who sent him to a coma. Nancy witnessed the entire scene, and tried to tell the policemen what happened, but they declared the girl was too shocked to tell anything sensible, and discarded her story. She also tried to testify during Roarke’s trial, but Hartigan, blackmailed by the Senator, asked Nancy to step back, and to let them frame him for the raper’s actions. Faithful to her hero, Nancy agreed, but kept writing letters to John every week, for the whole eight years he was put in prison. She had to use a false name, Cordelia, since Senator Roarke was ready to kill anyone who could say something about his son, Nancy in first place. She hid for some time, and she tried to live in the darkest corners of Basin City, so that the Senator’s men couldn’t find her. At a certain point, she was assaulted by some boys, but she was saved by Marv, an ugly brute with a kind spot for ladies who would have become one of her closest friends.

Nancy grew up a beautiful woman, and started law school, so that she could become a lawyer and save her hero from jail. In order to pay her studies, however, she ended up being hired at Kadie’s Bar, a strip club (more a dive than something else). At Kadie’s, she worked as an exotic dancer, one of the tavern’s most popular ones, and she had the occasion of meeting many of the most peculiar citizens of Basin. She had many boyfriends, but her stories ended very soon: despite she tried to fall in love with some man, she couldn’t cancel her feelings towards Hartigan, who would stay her first and truest love forever. She had the occasion of meeting the (former) detective once again when he was let out of prison, after confessing all Roarke’s crimes as his own, fearing for Nancy’s safety (Roarke had sent him a girl’s finger, making him believe it was Nancy’s). The two soon found out that their reunification was part of Roarke Junior’s plan to find out Nancy’s hideout, since he had been obsessed with her since the day Hartigan denied him his pleasure with her.

Nancy Callahan is a kind woman, a rare sight in Sin City. Despite her golden heart and good character, she often finds herself involved in underground criminality’s operation, mostly because of her friendships, which go from Marv to the Old Town‘s prostitutes. With the years, she learnt how to take care of herself, and she has grown a strong instinct for survival; underneath the hard skin, anyway, there lasts a romantic spirit, the same she had when she was a scared, wounded eleven-years-old girl.