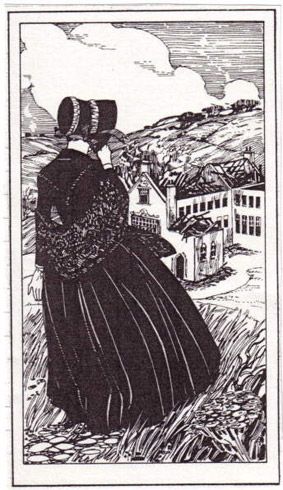 What I love most about Jane Eyre is the ferocity of her radicalism. She refuses to see the world as it tells her it should be seen. She will speak out, although she is a friendless nobody: small, pale, plain and female. From the first page there are hints of the fire that burns in her. Jane is out of favour, banished from the family hearth. She hides away in her own no man’s land, a window seat where she sits “cross-legged, like a Turk”, revelling in the pages of Bewick’s History of British Birds. A drawn red curtain conceals her from the room, while the glass protects her from “ceaseless rain sweeping away wildly from a long and lamentable blast”.
Jane Eyre is between two worlds and belongs in neither, although she will have to live in both during the course of the novel. She will be a beggar-maid, exposed on the moors, and a princess wooed by the King of Thornfield Hall, Mr Rochester. Neither will satisfy her. Jane’s quest is long and solitary, and she is protected only by her fiery spirit and incisive intelligence. But if Jane Eyre has fairytale and mythic qualities, she is also an intensely political creation. Jane genuinely does not believe that morality has anything to do with wealth, power or social standing. She repudiates the idea that women’s mental capacities are less than those of men. She would rather live alone than accept a relationship that compromises her independence. Strong stuff even in our times, but revolutionary in 1847. At 10 years old she castigates rich, powerful Mrs Reed for her hypocrisy and cruelty. At 18 she sets out into the world to support herself, having done everything possible to secure an education.
Her relationship with Mr Rochester is, to put it mildly, challenging. She will not be flattered: she must be an equal. Is Jane Eyre lovable? Perhaps not. She is intensely critical, and quick to scorn. There is no warmth of humour in her. She is elemental, with “rather a look of another world” as Rochester says, and yet at times extraordinarily prosaic. But if not lovable, she is utterly compelling. There was no one like Jane Eyre before she blazed on to the page, and into a million imaginations.