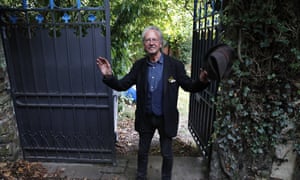 Austrian author Peter Handke greets the press outside his house in Chaville near Paris, on Thursday after his win. Photograph: François Mori/AP

Twenty years before Peter Handke would become a Nobel laureate, he won another title. In 1999, Salman Rushdie named him the runner-up for “International moron of the year” in the Guardian, for his “series of impassioned apologias for the genocidal regime of Slobodan Milošević”. (The winner was actor Charlton Heston, for being a gun lobbyist.)

The Austrian playwright, whose Slovenian heritage had inspired in him a fervent nationalism during the Balkans war, had publicly suggested that Sarajevo’s Muslims had massacred themselves and blamed the Serbs, and denied the Srebrenica genocide. Seven years after Rushdie’s scorching condemnation, in 2006, he would also attend war criminal Milošević’s funeral.

On Thursday, after the announcement of Handke’s win of the 9m Swedish krona prize (£786,000), Rushdie told the Guardian: “I have nothing to add today, but I stand by what I wrote then.”

The decision to award Handke the 2019 laureateship – alongside Poland’s Olga Tokarczuk for the 2018 medal – was widely criticised by observers as a broken promise on two fronts.

First, the Swedish Academy’s apparent commitment to be less “male-oriented” and “Eurocentric” just days before had been quickly proven false, with two European winners and only the 15th female laureate in 120 years. Secondly, having declared that the prize would take a fallow year to reassess its direction after a now infamous sexual harassment scandal, the academy had left observers hopeful that the Nobel would stop eliding controversy with intellectual rigour, and choose authors that could be praised for both their work and their politics. 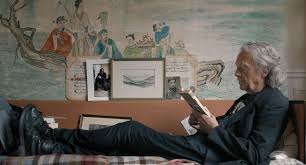 More than ever we need public intellectuals who are able to make a robust defence of human rights ... Handke is not such a person


“Handke is a troubling choice for a Nobel committee that is trying to put the prize on track after recent scandals,” said author Hari Kunzru, who has taught the laureate’s work to his students. “He is a fine writer, who combines great insight with shocking ethical blindness.”
Kunzru said he believed that Handke would have won the Nobel earlier, “had he not decided to act as a propagandist for the genocidal Milošević regime”. He added: “More than ever we need public intellectuals who are able to make a robust defence of human rights in the face of the indifference and cynicism of our political leaders. Handke is not such a person.”
Slavoj Žižek, Slovenian philosopher and longtime critic of Handke, told the Guardian: “In 2014, Handke called for the Nobel to be abolished, saying it was a ‘false canonisation’ of literature. The fact that he got it now proves that he was right. This is Sweden today: an apologist of war crimes gets a Nobel prize while the country fully participated in the character assassination of the true hero of our times, Julian Assange. Our reaction should be: not the literature Nobel prize for Handke but the Nobel peace prize for Assange.”
Slovenian author Miha Mazzini said: “Some artists sold their human souls for ideologies (Hamsun and Nazism), some for hate (Celine and his rabid antisemitism), some for money and power (Kusturica) but the one that offended me the most was Handke with his naivety for the Milošević regime. And it’s personal. I will never forget the cold winter when Yugoslavia was falling apart and there was nothing on the shelves of the stores. We were a young family and my daughter was a toddler and it was bitterly cold. I’d spent the whole day in the queue for the heating oil and in the evening, almost frozen, I started reading Handke’s essay about Yugoslavia. He wrote of how he envied me: while those Austrians and Germans, those westerners, had fallen for consumerism, we, Yugoslavs, had to queue and fight for everything. Oh, how close to the nature we were! How less materialistic and more spiritualised we were! Even at the time, I found him cruel and totally self-absorbed in his naivety.”
And in a statement issued on Thursday, novelist Jennifer Egan, president of literature and human rights organisation Pen America, said that while Pen “does not generally comment on other institutions’ literary awards ... today’s announcement must be an exception.
“We are dumbfounded by the selection of a writer who has used his public voice to undercut historical truth and offer public succor to perpetrators of genocide, like former Serbian President Slobodan Milosevic and Bosnian Serb leader Radovan Karadzic,” Egan continued. “We reject the decision that a writer who has persistently called into question thoroughly documented war crimes deserves to be celebrated for his ‘linguistic ingenuity.’ At a moment of rising nationalism, autocratic leadership, and widespread disinformation around the world, the literary community deserves better than this. We deeply regret the Nobel Committee on Literature’s choice.”
Handke’s politics have long been derided by former friends and authors. In 2008, novelist Jonathan Littell remarked: “He might be a fantastic artist, but as a human being he is my enemy … he’s an asshole.” Alain Finkielkraut called him “an ideological monster”, while Susan Sontag, who spent several months in Sarajevo during the Bosnian war staging a performance of Waiting for Godot, said Handke’s comments had “finished” him among his former friends in New York.
Dr Helen Finch, associate professor in German at the University of Leeds, praised Handke’s ability to explore “the fringes of human experience in an extraordinary way and for his “early and complex form of ecopoetics”, but said his Nobel win “shows that the prize committee is still infatuated by white European men writing in an elitist poetic tradition, and is cloth-eared to the political complicity of those men”.
Some were pleased by Handke’s win, however: Serbian media lined up to praise the decision, calling Handke a “great friend”, while Austrian president Alexander Van der Bellen called Handke’s voice “unfussy and unique … We have a lot to thank Peter Handke for. I hope he knows that.”
THE GUARDIAN